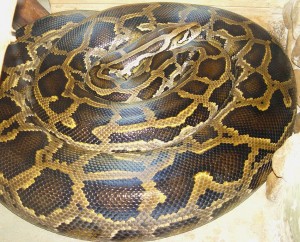 The skin, color, and patterns on the skin of this marvelous python make it extremely attractive and popular. Know a detailed physical description of the Burmese python below.

Size: In the wild, these pythons grow up to about 12 ft.

Weight: An average adult of this subspecies weighs about 91 kg.

Color: It is black colored of the darkest tone with big patches of brown on the skin.

This subspecies requires constant water flow. Thus the Burmese python can be found in swamps, grasslands, marshes, woodlands, rocky foothills, forests with open areas amidst them in some areas and river valleys.

These pythons are carnivores, like most reptiles, eating mostly mammals and birds. In captivity, they are fed with mice, rabbits and some poultry bred birds.

They clutch the prey with their sharp and pointy teeth. Then wind themselves around the prey contracting their muscles and seizing breathing of the prey. When they die then they are consumed by these pythons.

The digestive system of the Burmese python is very interesting. When it fasts it contracts its stomach and intestines, also controls the acidity and usual heart rate. 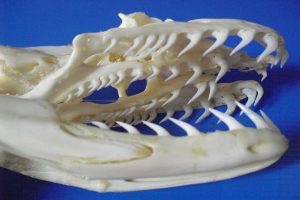 The Burmese pythons are as interesting to observe as their appearance.

These pythons are apex predators. Humans are the only ones that hunt them down, primarily for their skin.

This subspecies of reptile is well adapted to their environment and being apex predator they do not need any defensive feature.

The Burmese pythons mate during the spring season. 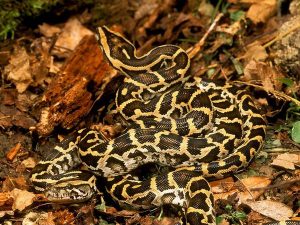 The Burmese python reaches mating maturity at the age of 2 to 3 years. They usually lay about 100 eggs at a time during the months of March and April. The eggs are incubated for approximately 2 to 4 months.

The growth rate of these pythons depends on the temperature, salt content and other conditions of the water in which they live in.

The newborn Burmese pythons stay inside the eggshells till they shed their skin for the first time. Then they start hunting prey for their meals.

In the wild, these subspecies have been known to live for about 28 years.

These pythons are non-venomous like all other pythons. They kill their prey by chocking them under their firm grip, contrary to the myth that they bite and poison the prey fatally. 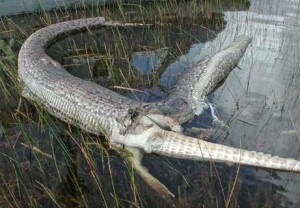 Burmese pythons of the northern part of its distributional range undergo hibernation in the cold weather. They hide in tree holes, under rocks and inside ground holes near rivers.

These Burmese pythons shed their skin sometimes after a few weeks from hatching. Their normal skin shedding rate depends on their growth rate. Sometimes they shed their skin as shortly as more than once in a year.

These subspecies are further bred in captivity for variations in pattern, color, and size. Albino morph is the most popular one amongst the hybrid morphs of these Burmese pythons. There are other morphs as well that can be distinguished by their colors like green, burnt orange, butterscotch yellow, granite and a few more. As mentioned before also that sizes also vary amongst these morphs. Dwarf pythons are the most admired ones amongst them. 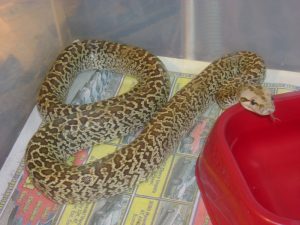 Despite being aggressive these pythons make exotic pets. But be very careful while handling them since they grasp others and make them immobile and unable to breathe. A few measures will make petting Burmese pythons a cake walk.

Housing: A tank measuring about 50 to 55-gallon tanks should be good to house your favorite Burmese python. Eventually, when it will grow bigger, a bigger and stronger enclosure such as a customized tank or maybe an entire room will be required to cage it. Unprinted paper sheets can be kept as substrate inside the cage.

Hides: Provide something for these reptiles to hide in, like a large bin box. Cut out a hole somewhere for them to sneak inside. Place some wet sphagnum moss inside the bin for their humidity retreat.

Temperature: Temperature should be maintained within 29 and 31 degrees C during the day and at night it should be ideally between 25 and 27 degree C.

Feeding: Feed them pre-killed preys to keep them from getting into the habits of a predator.

Water: Make sure that the housing arrangement of the Burmese python provides a water body always ready to its reach. They need to drink and soak in water frequently.

Handling: These pythons should be frequently handled since a very tender age to avoid their sensation of alien handling after they grow large.

These reptiles are more docile than other snake species. Juveniles are skiterry but can be tamed. Burmese pythons are aggressive feeders and thus should be handled in presence of another person.

Both alligators and Burmese pythons are apex predators. In such a war between an alligator and a python usually the bigger one in size wins and preys on the other one. So the unending debate of Burmese python versus alligators will keep on continuing if the simple logic of the “larger the greater” is not accepted by the arguers.

The wild population of these Burmese pythons, like all other pythons are enlisted under “threatened”. The world leather market is responsible for such an existence threatening situation of these pythons. 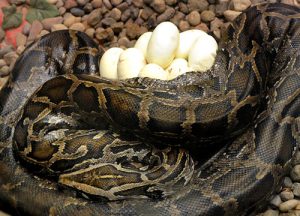 Mostly due to the large size of the Burmese pythons that people leave them in forests or sometimes post natural calamities they have smeared around, mostly in South Florida. In these parts of the state these pythons have become a dangerously invasive species, growing rapidly in number due to reproduce abundantly.

It became a major concern for the Everglades National Park authorities. Alarming numbers of rabbits, raccoons, white-tailed deer, opossums and foxes have been disappearing falling prey into those pythons. Recently reports have been around that more than 1800 of these pythons have been relocated from the Everglades.

Find out some fun and interesting facts about the Burmese python.

See the pictures of this magnificent looking Burmese python. Know for yourself why they are so popular in the leather market and so enticing for an observer. 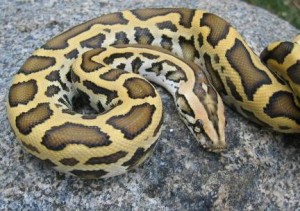 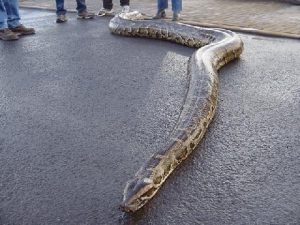