White-tailed deer is a very adorable animal species. These deer are humble and helpless when threatened by predators. They have very few adaptive or defensive features. They are fun to play with. The need very few caring procedures and lots of love if petted. This wonderful animal is completely harmless even when they are harmed.

Antlers : Male deer has one to six points in each of his antlers. Some females also have antlers, though very rare. Those female deer suffer from hermaphroditism.

Limbs : This species of deer is a quadruped animal. Experts believe that this species used to have 5 toes. With time it evolved into 4 toes. The toes secrete a kind of waxy substance that help track down their way.

Tail : Their tails are small with white colored underneath part. They are known to raise their tails and show the white part as an alarming signal when predators are somewhere near.

Color : These deer stay covered with thick coat of greyish brown coat throughout the winter months. During spring and summer they are reddish brown in color. 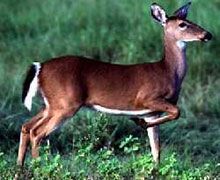 White-tailed deer have some very prominent behavioral traits. Find all about their behavior below.

These deer are herbivorous in their diet habits, like all other species of deer. They feed on lush, green grass, leaves, small plants, shoots, etc in summer and spring. During winter days they feed on twigs of plants, buds, corns, nuts, etc. when fresh green is not available.

White-tailed deer are found almost all over United States and Southern Canada. It’s only in the south-western parts of U.S.A., Hawaii and Alaska that this species cannot be found.

This species of deer inhabit woods and forests. They tend not to live too deep inside the forests in fear of being preyed.

These deer stray around in a range within 1 sq. mile.

Most of the carnivorous animals of the forest prey on white-tailed deer. Tigers, lions, leopards, bob-cats, hyenas, wild dogs, wolves, mountain lions, coyotes and other big cats prey on these deer. 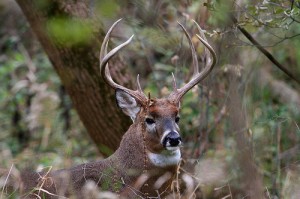 Female white-tailed deer, called does, mature sexually by the age of 2 years approximately. They become eligible to reproduce after 6 months from their maturation.

Male deer would compete amongst themselves to court and breed with a female doe. Males mate with many females during the rut. Male deer keep mating without rest or food till they get exhausted.

Does or the female deer give birth to1 to 3 young ones, called fawns, during the late spring season.

The young fawns are born reddish-brown colored and have white spots all over their bodies. They are capable of walking since birth, though feebly. Male fawns leave the parents’ habitats after a year, whereas the female fawns stay with their mother does till 2 years of age.

An average white-tailed deer lives for about 4 years to 5 ½ years in the wild. This deer species have been recorded to live for 6 years to 14 years in captivity.

White-tailed deer could be an exotic pet to have and easy to take care of. Read below the easy care sheet of these deer.

According to IUCN assessments this species of deer is perfectly safe and comes under Least Concern list.

White-tailed deer is as attractive looking as interesting to observe. Find out some very interesting facts about this deer below.

See how this astonishing species of deer looks like in the pictures below. 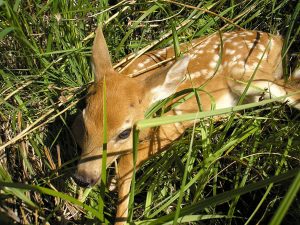 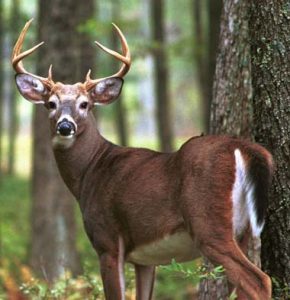