The Brown Thrasher is a special bird, native to North America. It is absolutely amazing how these birds can produce more than 3000 calls or songs from its vocal cord or repertoire.

This bird is distinguished by the bold patterns on its brown body.

Brown Thrasher belongs to the Mimidae family of birds.

Males and females look almost alike. There isn’t much variation between the adults and juveniles as well. However, the upper parts of juveniles have buff spotting and their eyes are noted to be gray.

Size: The brown Thrasher is approximately 11.5 inches in length. In size, it has often been compared to the American Robin. However a brown thrasher has a much more slender body.

Color: The upper parts of this bird’s body are noted to be a bright reddish-brown in color. It’s Buffy under parts are whitish with little black streaks.

Eyes: Its eyes are gold or yellow in color.

Wings: The two wing bars of this bird are distinctly whitish.

Bill: This bird has a long, sleek bill that is slightly curved. 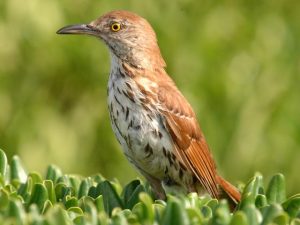 Tail: The Brown Thrasher is a long tailed bird. This tail is reddish brown in color.

The Brown Thrasher loves to feed on insects and fruits of all kinds. This bird thrives on an omnivorous diet that also comprises of nuts and seeds along with earthworms and snails too.

The breeding range of the Brown Thrasher extends from the United States and Canada, right to the east of the Rocky Mountains.

This migratory bird winters in the southern regions of the USA.

The call of the Brown Thrasher is identified by a series of dry “tschek” and whistling “pitcheree” sounds. Often a shrill, sharp note of “spuck” followed by a low “churr” would also be included in their call. Brown Thrashers are also capable of imitating the call of other birds.

These rich and melodious songs of the Brown Thrasher can be a treat to the human ears. Endowed with the blessing of a versatile singer, these birds can produce more than 3000 songs from their repertoire.

The male and the female Brown Thrasher are equally involved in building this nest that is usually placed in a safe place like dense shrubs, to keep it away from the sight of predators.

The female Brown Thrasher can lay up to 3-5 eggs in a singe clutch. These eggs are brown in color with buff colored spots in them.

The incubation of the eggs is undertaken by both the parents. This period of incubation involves 11-14 days. The little chicks are ready to take their first flight after aperid of 9 to 13 days after hatching. 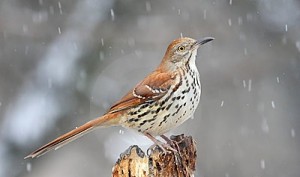 The Brown Thrasher is solitary bird by nature. This bird is prompt in seeking for cover or a hiding place. It also displays certain secretive behavior.

One may often spot these birds lurking inside thickets. Brown Thrashers forage on the ground looking for insects and fruits. It is a delightful sight to observe these birds hopping on the ground.

Its long and sleek bill makes it convenient to look for its food (that mainly comprises of insects and seeds) by removing leaves and other such objects. This bird will not even hesitate to dig into litter at times.

The Brown Thrasher is often spotted enjoying a quick bath in the water puddles and sand of the road. It rolls in the sandy road paths in order to dry its plumage and to get rid of the insects sticking to its body.

These birds are extremely defensive when it comes to their nests and territory. The male’s repeated a song which it sings from an open perch is like a declaration of its territory. If two nests happened to be placed alongside one another, the males accompanied by their females are observed to be fighting furiously.

Brown Thrashers exhibit a curiously interesting courtship display. The males are observed to swagger in a graceful manner before the females. Its tail is trailing on the ground during this act. The male bird will also sing in the presence of the female. At times, the male brown thrasher will also vibrate its body with a lot of force in order to catch the female’s attention.

It has a lifespan that extends up to a period of 12 years.

The Brown Thrasher is quite an interesting bird. Lets us take a look at some startling facts about the bird.

The Brown Thrasher is not enlisted under endangered species. However, a certain extent of decline has been noted in the Northeast as a consequence of habitat loss.

Enlisted below are some amazing pictures of the Brown Thrasher bird. 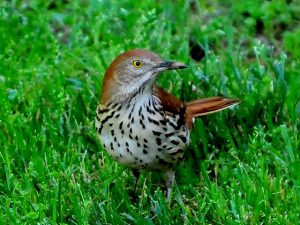 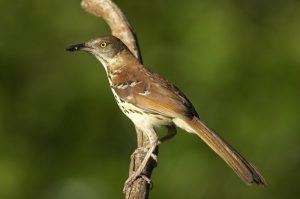