It is a type of bug that has special mouthparts that let them suck the juice of the plants. This helps these insects pierce plant stems and seed pods, inject saliva and draw the juice from within.

This pest usually feeds on flowers, leaves, silver maples and seedpods of Boxelder trees. This is the reason why this insect is known as Boxelder Bug.

The management of this insect involves prevention. The best way to prevent these insects is by restricting their entry to your home. Install copper mesh or spray foam in your windows and doors to prevent entry of these bugs. You should also seal your phone lines, cable wires and pipes and faucets. You must also make sure that you seal all spaces and cracks around windows, doors and roof lines.

Make sure that the product that you buy can be used on the interior as well exterior of your building. Certain insecticides are useless in cold temperatures. However, insecticidal sprays and soaps containing ingredients like Cyfluthrin, Esfenvalerate or Permethrin are found to be effective.

There is another effective product known as Wasp and Hornet insecticide that is sold in aerosol cans. This Boxelder Bug spray can be applied on the bugs from a distance thus taking them by surprise and killing them instantly. It is best to use this chemical on those Boxelders that gather in big groups during the Spring season.

There are many methods to control Boxelder Bugs, these include : 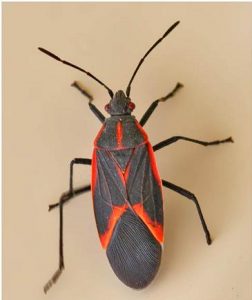 Add soap with water to form a dilute mixture. Spray 2 tablespoons of this mixture directly over the insects. Direct contact with soap water mixture kills these bugs very easily.

A small duct tape strip sticks these bugs to one place and prevents them from flying away. This kills them very easily.

Pouring a small amount of boric acid or diatomaceous earth (A light soil containing siliceous diatom leftovers) in spots where these bugs gather can keep them away for some time.

This pest can be naturally controlled if there are geese or rodents in the vicinity. These two species of animals are known as predators of these pests.

This pest is also known by various other names like Maple Bug or Zug. It is also sometimes known as “Stink Bug” or “Garage Bug”.

The bug is mainly found all over North America. The species is native to the northern part of America.

These insects are approximately 3/4 th of an inch in length.

The color of these bugs usually varies from grayish brown to black. As aforesaid, it has three red bands on its chest and narrow, diagonal red bands on the upper region of its wings.

These pests have a very short life span. The duration between the birth and death of an average Boxelder is quite short. This insect usually dies faster than other pests of the same kind.

These pests are generally black in color with red lines on the edges of their wings and three red lines marking the thorax.

Adult insects of this family choose the Spring season to lay eggs on trees. In Spring, these bugs gather on sunny regions of bricks or sides of homes in groups of 50 to 200. They start mating with other bugs one or two months later. Boxelder Bug mating season begins in summer. You can find these connecting end to end around May, either singly or in groups of three or four.

The bugs feed on new twigs, flowers, leaves and soft plant tissues in summer. Unless there is a huge population, minimal damage is done to plants. There are certain years when the population of these insects soars. A high population of Boxelders can severely damage plants and trees that they reside in.

These pests enter homes during autumn. During winter, they look for hibernating spots. Crevices of buildings and areas behind siding are ideal places for them to live in. Adult female bugs hibernate in places that offer protection to them. They remain there until winter goes away and the weather turns hot enough for them to move about comfortably. When Spring arrives, the bugs leave their hibernation spots to lay eggs on leaves and barks of ash or maple trees.

This bug is non-poisonous in nature. It is harmless to humans. These do not bite humans and do not have an unpleasant odor. However, this insect can be quite a nuisance in many other ways. The waste of this pest can leave ugly stains on fabrics. The gathering of these pests and their droppings in various places indoors can be highly annoying for people.

They are not known to cause much damage to crops. However, a congregation of many of these pests can be detrimental to the health of plants. When crushed however, these bugs produce a displeasing odor.

Some people also develop allergies to these pests. Allergies arising due to contact with these bugs should be treated through medical means. If you suspect yourself to be suffering from allergenic symptoms due to this bug, it is essential that you get proper medical treatment.

Here are some Boxelder Bug Pictures that will give you an idea about the appearance of the insect. Check out these Boxelder Bug images to know how this pest looks like. 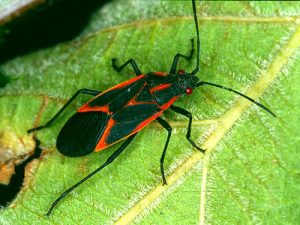 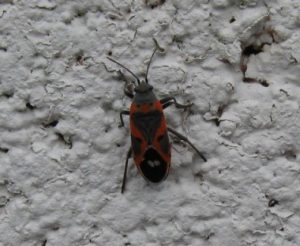