Atlantic Salmons are associated with the family of Salmonidae and are the fishes of the North Atlantic. These belong to the Salmo genus which has only this species and the second genus has 8 of them. Black Salmon, fiddler, Sebago Salmon and spring salmon are some of the commercial names given to them. They are great travelers, traversing oceans and rivers to and fro in different phases of their lives. These fishes have been integral to history since above 20,000 years, not just as a food but also as a symbol of cultural rituals.

Read on for information about their physical features.

On an average, these salmons measure around 30 inches or less.

They attain almost 3.5 to 5.4 kg weight in their initial years but during adulthood that might as well augment to 13 kg.

Different coloration and patterns can be observed on them at various stages of their life. These fishes have a bluish shine when adults and in their juvenile stage, they have spots all over in red and blue. When males reach sexual maturity and start spawning, they attain reddish and greenish hues. 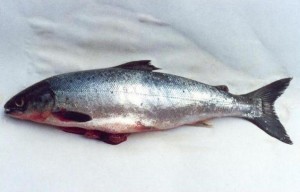 They have fusiform bodies which taper at both the ends.

It has a mild flavor.

Baltic, North American and European are the three groups of Atlantic Slamons that have been specified. They reproduce in the rivers lying in Europe, Iceland, northwestern Russia and North America’s northeastern rivers, after which they move to different parts of the Borth Atlantic Ocean. Parts of Canada and U.S ranging from Quebec to Newfoundland, extending to Long Island are the regions where they are distributed.

Where do Atlantic Salmons Live?

Based on the lifestyle of these salmons, their habitats comprise oceans and freshwater sources throughout their lifetime. Almost 2 to 3 years is spent in the freshwater before their migration to the oceans. In freshwaters, they inhabit well oxygenated waters in rocks and gravels.

When they are not spawning, they live in oceans at a depth between 2 and 10 meters. Here they can hide from their predators and also build nest in privacy. Again during spawning season, they inhabit river tributaries abound in clean water and gravel. Such habitat allows the Atlantic salmon fries to hide till they are big enough to start eating invertebrates. Nursery or the habitat of parr stage is basically shallow waters with normal moving waters.

Some unique behavioral traits noticed in them are:

What do Atlantic Salmons Eat?

They have varied eating habits. Juvenile salmons remain in rivers and streams in their initial years where have a diet rich in aquatic insects and other creatures brought into its vicinity by the prevailing current. As adults, their feeding pattern changes and they start eating bigger food items like sand eels, Arctic shrimps, Arctic squids, amphipods as well as herrings.

By the time the fries emerge out of the gravel, they form stripes on their sides which help them camouflage themselves. Streamlined bodies help them swim effortlessly for long distances.

Though both are from Salmonidae family, they have varying life cycles and also form different genus. They are born in freshwater and move into the ocean in the later years.

April to November, are the months when adults swim into freshwater where the females are laden with eggs. Wild Salmons of this species spawn by the end of autumn when to choose clear oxygenated water for laying eggs which is fertilized by the males by dropping their sperms. 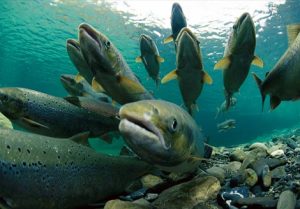 Female Atlantic Salmons get ready with their nests called redds during the fall when they lay their eggs. Eggs remain in those pits through winter, hatching in spring.

These eggs develop in the gravels, waiting to mature till favorable time comes. When the alevin come out they keep hidden by drawing food form their sacks.

During autumns when orange colored eggs are laid, a journey is about to begin which will comprise several transformations. By spring, baby salmons arrive when they measure around 2 cm, deriving nourishment from the yolk sac. With time, this sac gets eliminated and they roam free.

They reach the fry stage when they are around 6 to 8 cm long and by the time they attain the parr stage, they receive erect spots on their sides. Till 6 years they inhabit the rivers and then while at sea they already become 20 to 24 cm in size. After remaining in sea for a year it makes a journey to its home waters in which it traverses almost 4,000 km. By the end of fall, they indulge in spawning in the shallow river tributaries.

Depending upon the geographical range their growth takes place. Northern zones might delay their development into smolts in comparison to the south.

Life span of these fishes varies from 2 to 8 years.

Many large fishes and seals are their regular predators at oceans. Besides, there are other environmental hazards including climate change and water contamination that pose as major threats to their existence.

As efforts have been made to restore the population of this fish species, it is better not to pet them.

Some ill effects of consuming farm-raised Atlantic Salmons have been reported. Studies indicate that consuming these might lead to cancers as these salmons might contain certain hormones responsible for fatal diseases. Farmed Salmons have dyes in them that is bad for health.

Atlantic salmons can be consumed during pregnancy as it has rich nutrients which help in the development of the embryo. But restraint should be exercised and physician consulted before consuming them. North Atlantic Salmon can be had in baked, grilled and poached form as it has several essential nutrients.

They start migrating to the oceans when they grow about 4 inches, reaching the stage of ‘smolts’. Oceanic migration happens after completing their stint in freshwater for almost 2 to 3 years. After successfully living in the ocean for a year or more, it journeys back to the natal river. During the springs they migrate to the sea where they make their home till the winter ends. 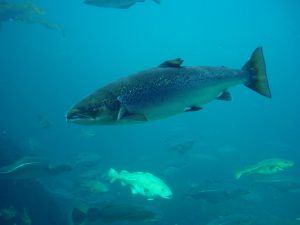 This organization has been established to conserve and protect the wild Atlantic salmons along with their ecosystems in which they subsist. Numbers of these fishes have declined in the last couple of hundred years and in order to save them from getting extinct in many places, the organization has undertaken several programs which would revive their populations and bring them back to the Atlantic.

In USA certain populations of these fishes have declined for which they were reported to ne endangered under Endangered Species Act but several means to recover their population have been implemented. In the lakes and rivers, they have been introduced where fishing has been banned.

Atlantic Salmons are valued as game fishes for which they are chased during their migrations. These salmons are farmed via aquaculture in UK, Canada and Australia among many others. They have been subjected to human consumption for which much of their population has declined. This is one of the reasons why they have dwindled in numbers in the Great Lakes, where they have been introduced. It has been protected under law in several countries and restoration programs have been undertaken to deal with the issues of conservation.

Some pictures of Atlantic Salmon have been listed here to help you in its identification. 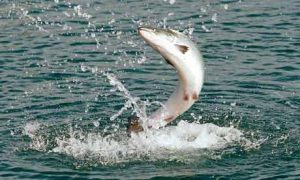 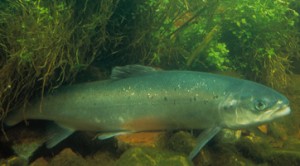