Atlantic cod is a renowned demersal food fish of the Gadidae family. It is also known as haberdine, codling and most popularly as cod. Find out all about this amazing sea fish in the article below.

Size : This fish can grow to the length of 2 meter.

Color : These fish have grey or green colored scales. Sometimes they can also come in reddish or brownish shades. Their underneath parts are whitish in color. Their lateral lines are pale

Head : Their mouths open huge given their upper jaws and gills stretch wide.

Body : Their bodies are oval shaped. However their tails are square-ish.

World’s largest hub of this fish is north-eastern Arctic areas, namely Arcto-Norwegian. It is also majorly found in Greenland. Coastal area of Europe, from Barents Sea to Bay of Biscay is another hub of this species of fish. 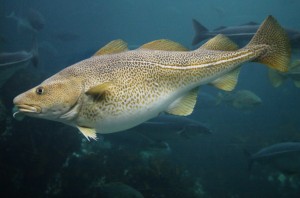 This fish tends to inhabit temperature climes with long winters. They mostly live in the shallow areas to the deeper zones of the sea.

This species of fish primarily diet on water shrimps.

This fish is considered quite nutritious. Find out its detailed nutrition content in the chart below.

These fishes are known to be winter spawners. They spawn in November and December.

Both genders of this species of fish reach reproductive maturity by the age of 5 years to 6 years. The number of eggs laid by female Atlantic cods in each spawning season depends on their age and size. They spawn in quite in-depth of water level, about 350 ft deep. The fishes that inhabit inshore move to offshore during reproduction.

Atlantic cods have been observed to live for about 25 years.

Many fishes prey on young Atlantic cods and even the larvae. Grown up Atlantic cods are so big that they hardly have any predator apart from sharks and whales.

These fishes are so huge in size that they hardly have any predator of the grown up fishes, thus no adaptive feature or defense mechanism is required by them.

Atlantic cod has been listed as Vulnerable by IUCN, which means its existence is under threat.

This species is a white flesh fish and very nutritious. Hence, this fish is being eaten in many forms.

Find out some of the most interesting points about Atlantic cod in below.

Check out the pictures of this gorgeous fish below. 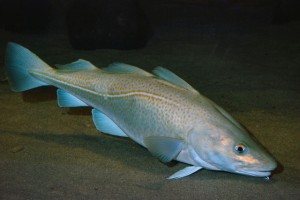 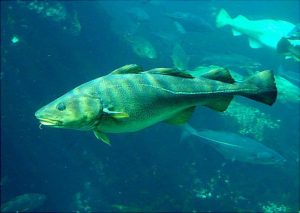 One response to “Atlantic Cod”