The white-handed, or lar gibbon, or indeed the white-cheeked gibbon, is a primate found in the forests of South and Southeast Asian countries like Myanmar, Thailand, Indonesia, Malaysia, Laos and possibly China. It is one of the best-known gibbon species in the world. 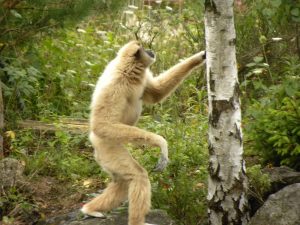 Pelage – Most of their body is covered in thick, soft hair. Only the face, feet and parts of the hand are hairless.

Color – Colors can vary from light brown to dark brown or black; the face has a white-colored edge to it. The topside of the hands has some white fur on it, thus giving it its name. 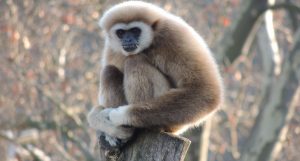 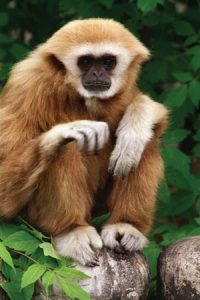 There are five subspecies of the white-handed gibbon, one of which is believed to be extinct: 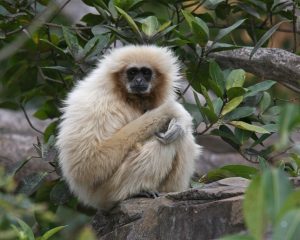 An arboreal and diurnal animal, the lar gibbon hardly ever comes down to the forest floor. It uses its long and supple arms to swing from tree branch to tree branch. It is generally active for about nine to ten hours a day, during which, they spend their time feeding, resting, traveling, socializing and vocalizing. When they do descend to the ground, they walk on two legs while keeping their arms aloft their heads in order to keep balance.

White-handed gibbons are monogamous; they live in small family groups of a male, a female and a juvenile, if any. They copulate year round, but the conception of the young generally occurs in the month of March. Gestation period is around 6-7 months, after which a single offspring is born. 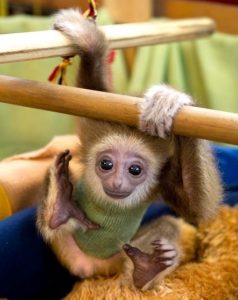 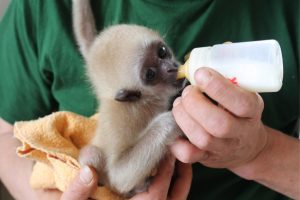 Peak birthing season is towards the end of the rainy season. Weaning is done when the baby is about twenty months old. Females reach sexual maturity between 6-9 years of age, while the males become reproductively active at 9 years of age. They only conceive once in every 3.5 years.

White-handed gibbons use songs as their main mode of communication. These ‘songs’ are sung in duets by the mating pair and used to mark territories. Each morning they gather at the edge of their territory and partake in a great call; each subspecies have specific variations of the theme of these calls, and these variations are used to distinguish one from another.

Fruits constitute about half of the white-handed gibbon’s diet. Other foods that they like to eat are leaves, tree barks, plant shoots, and flowers. In fact, their dietary habits can, at best, be described as omnivorous, as they have been known to feast on bird eggs and insects like wasps and mantis, and even occasional birds. 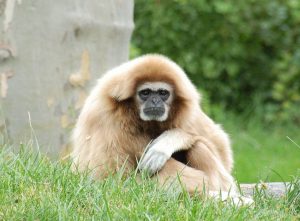 The white-handed gibbon is usually not preyed upon by other animals, however, eagles, leopards, marbled cats, and pythons are all potentially capable of killing this primate. 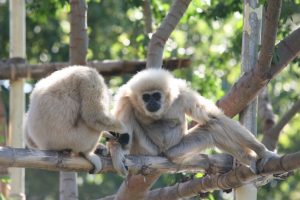 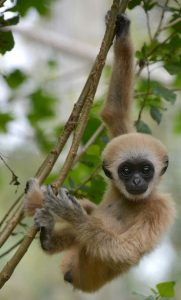 White-handed gibbon is listed as ‘Endangered’ by the IUCN 3.1 and it is on a ‘decreasing trend’. Their exact number in the wild is unknown in countries like Myanmar, Indonesia, and Malaysia. Largest population numbers are found in Thailand in places like the Kaeng Krachan National Park, Khao Yai National Park, Phukhieo Wildlife Sanctuary and Nam Nao National Park.

Hunting for their meat is one of the primary reasons for their dwindling numbers. It is also common for one or both parents to be killed so that the baby can be captured. Like many other wild endangered species, loss of habitat is another deadly threat – as mankind grows, animals suffer!