The Vampire Finch is one of the 15 species of finches in the Galapagos. Vampire finch gets its name from the bloodthirsty vampire bats. Their unusual blood-sucking trait has made them well-known around the world. A subspecies of the Darwin Island’s sharp-beaked ground finch, they differ from the latter only by their feeding behavior. They, along with other Galapagos finches, are collectively called “Darwin’s Finches” for showcasing the example of Charles Darwin’s theory of evolution by natural selection. 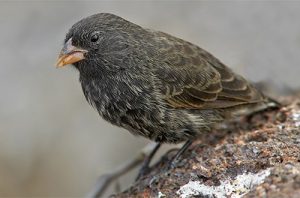 Fur/hair/coat: Primarily black to grayish black in color (both body and tail).

The males are black, and are brighter, while females are dull grayish with brown streaks.

They live for 5-10 years (average), depending on food availability, range, etc. 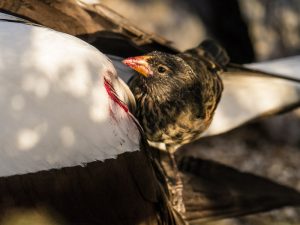 Distribution & Habitat: Where do they Live

They are found around the equator in the Pacific Ocean, and are native to the Galapagos Islands, west of continental Ecuador, in the deciduous forests with open patches of low-growing vegetation of the Darwin, the Genovesa, and the Wolf Island.

These birds are gregarious, and also forage and feed together from a common source, especially the blood from a victim. However, in places where different species share a common range, competition can get intense.

Typically monogamous, they breed opportunistically choosing mates. During mating season, males guard their nesting territories. The nests are small, dome-shaped, and often built in bushes or cactus plants. Egg-laying is most profuse in abundant rainfall and sufficient food. 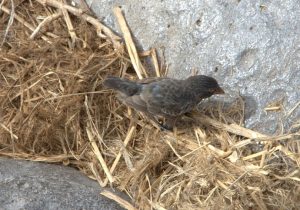 The clutch size of the vampire finch is usually three. The eggs are incubated for about 12 days, until the juveniles hatch out. The nestlings are mostly fed with insects by their parents. Baby vampire finches take around 14-15 days to leave the nest.

Diet: Do they Suck Blood

As opposed to the popular notion, these birds do not thrive only on blood, with their primary food being seeds and insects. Like other finch species, they are voracious seed-eaters; however, only when there is a lavish supply. They also consume bird eggs and nectar. With a frequent scarcity of fresh water and seeds, they evolved with this distinguished blood-drinking behavior, using their sharp beaks to peck on the skins of other larger birds (mostly the Booby). 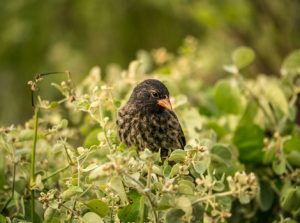 Those living in the Wolf emits a lilting song, and those in Darwin usually buzz. Both also emit a common whistling call. 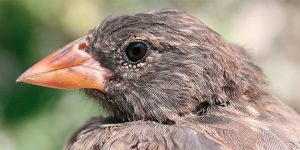 They have no specific predators, except for the larger local birds, and a few introduced species of mammals.

This is an endangered species. Confined to a small island, the population is declining rapidly. However, very recent studies have shown a relative stability in their present population. 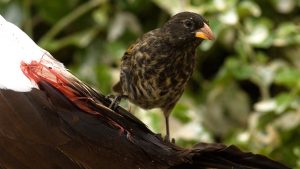 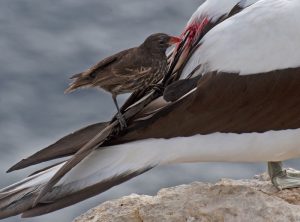 One response to “Vampire Finch”