The Tricolored Heron is a species of heron belonging to the genus “Egretta”. It is found mostly in the northern and central parts of America. In North America, it was formerly known as the Louisiana Heron.

The Tricolored heron is a beautiful bird. Given below is a detailed description of this bird:

Size: It has a length of almost 22 inches.

Weight: Their body weight is about 350 grams.

Neck: Like most herons, the Tricolored Heron has a long neck.

Bill: The long and pointed bill is comprised of a black tip which turns blue during the breeding season.

Wings: The heron has a wingspan of almost 38 inches.

Color: It has blue-gray feathers on its head, back and upper wings. The color on the chest and the belly is white and the neck is rusty with a white stripe. The bill is yellow in color.

Legs: The Tricolored Heron has long legs which are yellow or dark colored.

Sexual dimorphism: The males and females are similar in appearance. 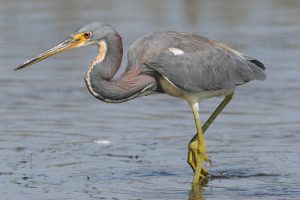 Read below to find out about the behavioral traits of these birds:

These birds are often heard to emit nasal croaks and squawks. A sharp, load “kyowk” is heard when they feel flushed.

During flight, the neck of a tricolored heron bends to form an S-like curve. They mostly glide with an average speed over a medium elevation.

These birds like to tread along deep or shallow water while searching for its prey. Their diet mainly consists of crustaceans, insects, fishes, gastropods, reptiles and amphibians.

The Tricolored Heron breeds mostly in parts of Mexico and on the Gulf Coast of USA. They are also found on the Atlantic Coast from New Jersey to Florida. After breeding, they generally move north of their nesting locality. During the winter season, they migrate to the south towards Central and South America, Peru, Brazil and the Caribbean Islands. 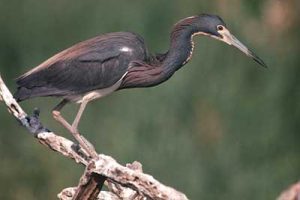 These birds have adapted themselves in ways that help them to evade predators. Some of their adaptations are discussed below:

Tricolored herons are monogamous; they have a strong bond between the pairs. The males may fight among each other during the breeding season for the females. The females often try to enter the nests while the males are involved in a circle flight. They may also join their preferred male in fights against other males.

Tricolored herons build their nests on platforms made with stems and twigs. They may also line their nests with grasses. The nests are mostly built in coastal islands or swamp forests.

Preening, erecting feathers and twig shaking are common courtship activities. Another notable courtship ritual is Bill-Nibbling, where the male and female birds open and close their bills close to each other and create a smooth rattling sound. Copulation occurs on or near the nest. The female welcomes the male by withdrawing her neck and squatting forward. While mounting the female’s back, the male bird uses its toes to grasp. Copulation may last for 8 to 10 hours.

The females lay 3 to 7 eggs per clutch. The eggs are light blue-green in color. Both the male and female birds incubate the eggs for almost 3 weeks. Hatching occurs over many days. The young birds are fed regurgitated food by their parents. Both parents take care of the eggs and the hatchlings.

The expected lifespan for this species is around 17 years.

The Tricolored Herons are listed in the category of “Least Concern” by the IUCN.

Here are some images of these beautiful birds. 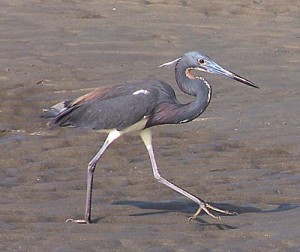 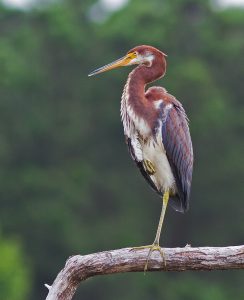 One response to “Tricolored heron”