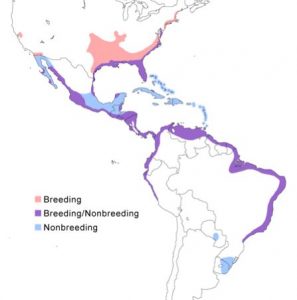 Wingspan – Fully stretched wings can measure up to 40 inches (102 cm).

Plumage – Breeding Adults have blue and grey plumage, the head and neck are purplish with long filament-like plumes, the legs and feet are dark blue. Non-breeding Adults exhibit a dark-blue neck and head plumage and pale legs. Juveniles are completely white other than dark wing tips and dull greenish legs, they acquire the adult plumage as they grow older.

They are distributed over a large stretch from Massachusetts to Florida along the Atlantic Coast, Gulf of Mexico. parts of Central and South America as well as the Caribbean islands. 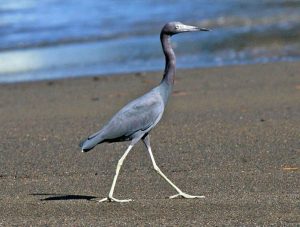 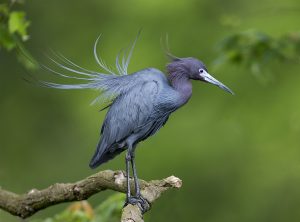 With their necks stretched upwards, the males try wooing the females by bending in front of them also expressing themselves by vocalizing alongside other movements like neck swaying. If impressed the female approaches the male with initially aggressive interactions gradually transformed to affectionate gestures like nibbling at each other’s feathers and crossing their necks.

The male then proceeds to gather sticks for the female who duly receives and places them into a nest structure. 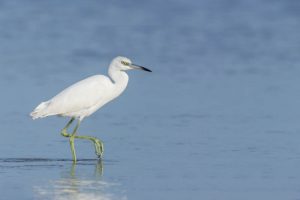 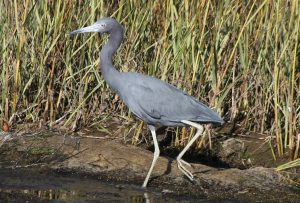 Other than raising their head, the chicks cannot move much and depend on their parents for food which is either provided in their nest or later put into their mouths.

After about 21 days they can make short trips to nearby branches while in 30 days they start taking periodical flights.

At 42-49 days they become fully fledged capable of moving around on their own. One year after their birth they can begin to breed.

They can live for 7 years in their natural habitat.

They are carnivorous, thriving on fish, frogs, snakes, turtles, lizards, shrimp, fiddler crabs, crayfish, aquatic spiders, and insects. When the water in the swamps and marshes dry up, they even eat beetles, grasshoppers, and crickets.

They communicate through hoarse croaks and squawks, 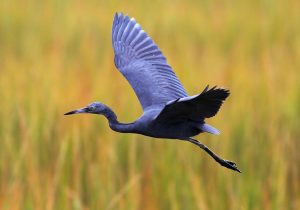 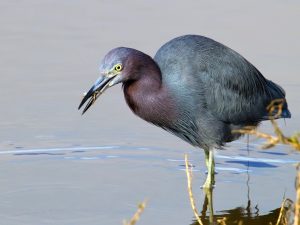 These birds are preyed upon by cougars, raptors, and coyotes, while their eggs are mostly devoured by ravens, foxes, raccoons and crows.

The IUCN has listed the little blue heron under the ‘Least Concern’ category. 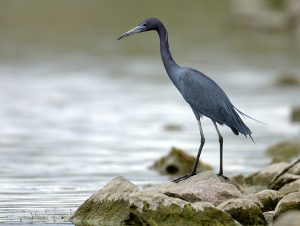 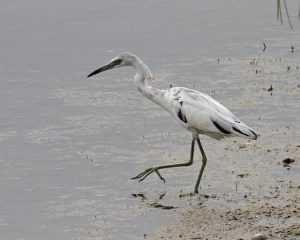