The Yellow-crowned Night Heron is a graceful bird, gorgeous in its own way. It is comparatively smaller in size as compared to other herons of its family. The fact that it bears an almost similar appearance as its cousin the Black –crowned Night Heron, makes the Yellow – crowned heron an even more interesting study.

This bird is widespread in most parts of America. Their migratory nature depends on the temperature of the location.

Both the sexes look quite alike. The juveniles, however are brown flecked with gray or white. 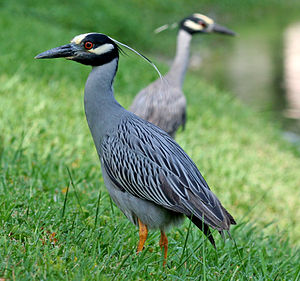 Color: This bird has a blue – gray neck, back, chest and belly. Its head is black with a white streak on either sides of its face. This heron’s crown is white in color.

Wingspan: Its wingspan is roughly 44 inches.

Bill: Its bill is basically black in color.

This bird can be found in a variety of wetland habitats including both fresh and salt water marshes, swamps, lakes, streams as well as agricultural fields.

The yellow crowned night heron has a wide range that spans to almost five continents. However populations are highly concentrated in North America. These birds breed along the Atlantic coasts, starting from New York venturing southwards to Kansas and Indiana and further south to South America, southern Brazil and on Pacific coast to Peru.

These birds winter along the Atlantic and Gulf coasts of South Carolina. Ones native to warmer locations remains resident.

Their diet chiefly comprises of crustaceans including crabs and crayfish. However, at times the yellow crowned night heron also feeds on frogs, small fish, aquatic insects, mussels, eels and mollusks.

This bird has a clever way of hunting. It stalks its prey and waits in ambush at the water’s edge to take its prey by surprise and kill it.

The call of the Yellow-crowned Night Heron is distinctly higher and more nasal, as compared to its close relative. It lets out gruff barking guttural sounds like ‘kwehk’ or ‘kyowk’. A loud ‘quawk’ is also audible at times. However, this bird often remains silent at night.

Yellow crowned night herons mostly nests in trees, but at times they may also build their nest on the ground. It is a common trait of these birds to nests colonially with more than a dozen nests in a single tree. Its nest typically comprise of a platform of sticks that are placed in either a tree or a cattail.

The female lays up to 3-5 eggs in a single clutch. Eggs are pale greenish in color. Both the male and female equally participate in building the nest as well as incubating the eggs. The incubation period lasts for about 3 weeks at the end of which the eggs are ready to hatch. Both parents care and feed the young with chucked up or regurgitated food. 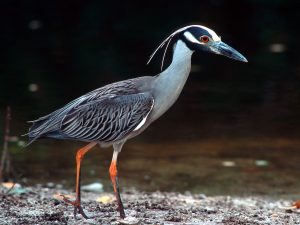 The chicks are ready to fledge in about 25 days.

This particular species are known to produce one brood each season; sometimes it may even sum up to two.

The yellow crowned Night Heron’s flight is characterized to be graceful, direct and very strong with slow wing beats. Its legs and feet are jutted behind its body during its flight.

If disturbed, it may almost rise in a vertical position and thereafter take a direction.

This bird is almost entirely nocturnal though, at times it can be spotted foraging for food during the daytime as well.

Yellow crowned night herons exhibit an interesting way of preying; these birds tend to grasps the prey and do not stab it using their bill. They are ambush hunters that wait motionlessly near water edges for the prey to pass by.

These birds winter in warmer location of Central America and the West Indies. However those native to warm locations do not migrate during winters.

Let us take a look at some fun facts about these birds.

Yellow crowned night heron’s can live for up to 6 years in average.

The Yellow-crowned Night Heron is not enlisted as threatened or endangered species. However, population declines have been noted in several states mainly due to habitat loss and commercial harvest for its feathers.

Here are some great images of the Yellow crowned Night Heron. 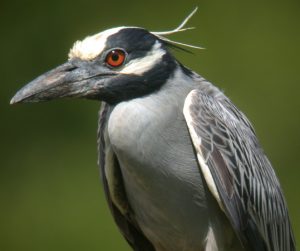 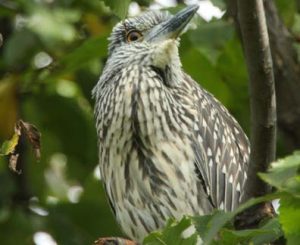