The Spotted Salamander, also known as the ‘Yellow Spotted Salamander’, is a species of secretive, forest-dwelling American mole salamander that has got its common name from the two rows of yellow or orange spots, spread all over its body. 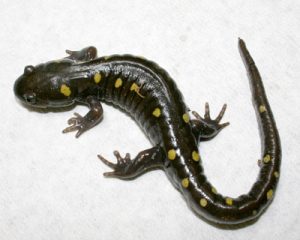 Weight: They weigh around 12.84 grams on an average.

Body: They have smooth, glossy skin. The face is very similar to the gecko. They have a stout body. Like most other species of mole salamanders, they have wide snouts. They also have 12 costal grooves on both sides of their abdomen.

Colors and Spots: The base color of these creatures is black. Some specimens can also be dark grey, dark green, dark brown, or bluish-black. There is a pair of uneven rows of yellowish-orange spots running from its head (next to the eyes) to the tail tip. The spots close to the head are orangish yellow, and the spots on the other parts of the body are bright yellow. The underside (belly and abdomen) is pink and slate gray.

Legs: All their four feet are large and strong with 4 toes on the front legs and 5 on the hind. They do not have claws.

Tail: The tail is large enough and has the ability to drop and regenerate.

In the wild, the adult spotted salamanders can live for almost 20 years.

They are common in the eastern regions of the United States of America and in Canada. The yellow spotted salamanders range from Nova Scotia, to Lake Superior, to southern Georgia and Texas.

They live in dense forests, in areas where the soil is moist and the floors are covered with dry leaves, bushy shrubs, etc. They take shelter in deserted burrows of other animals, crevices, or under logs of wood or large rocks, so that they can keep their skin moist. Without moisture, these reptiles will dry out and die.

The spotted salamanders are nocturnal, and would come out during the night to find food. After transforming from the larva to the adult, they leave the pond on rainy nights to seek for shelter. They are not known to be good diggers. However, some have been seen modifying or enlarging their burrows. Mostly, these animals tend to live within 100 meters from their breeding pond, but never more than 250 meters. While most of these amphibians live within a few centimeters below soil surface, some have even been seen to be living as deep as 1.3 meters. 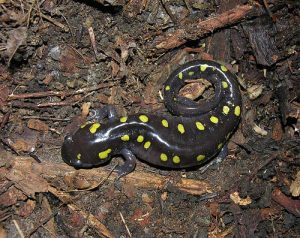 These animals are not much active. They would move only up to the spot where they will find food and a moist shade for shelter. They rarely leave their burrows except for shortage of food, and that also, during moist and rainy nights. They are also not too comfortable with extreme climatic conditions, and will keep themselves concealed when conditions are too dry, too cold, or too warm. 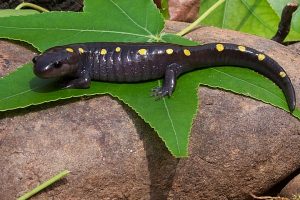 If they feel threatened, the larvae of the spotted salamander would hide in the mud and debris at the pond bed. However, they would predate aggressively, when they are not threatened. When ready to breed, the adults would return back to the same pond where they had hatched in even if there are other ponds close by. They would never fail to locate the pond even when they have moved hundreds of meters away from it. In fact, they would follow same path to reach their breeding pond, and would arrive and leave at the same spot. 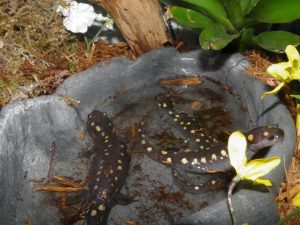 Spotted Salamanders breed in March and April, after temperatures begin to get warmer and heavy rains have fallen.

The breeding time of these creatures falls around March and April, after heavy showers, and when the climate starts to get warmer. These salamanders exhibit courtship breeding patterns and internal fertilization. 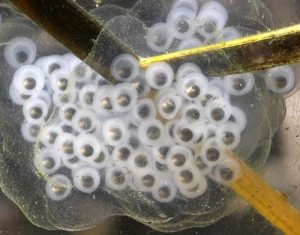 After the adult male and the female find their breeding pool for mating, the females lay its eggs in large clumps. They would release a milky mass of almost 200 eggs in shallow ponds, measuring about 4 inches across. The female sticks the eggs to underwater plant stems, twigs, or sticks and takes care of the eggs, guarding them. The embryos have been seen to have symbiotic algae living inside them. 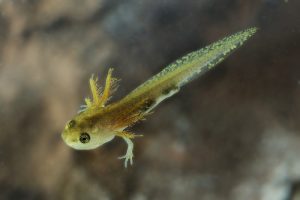 The eggs take around four to eight weeks to hatch, depending on temperatures. The larvae of these creatures are about ½ an inch during birth, and have a strange resemble to tadpoles. The only difference is that, the former have feathery gills for respiration, branching out from their heads. The larvae take two to four months for metamorphosis, transforming into adults. 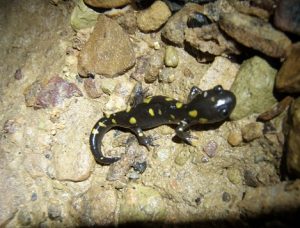 Before growing up, they live in their pools, feeding on water fleas, insect larvae, and other small creatures. Strangely, they are cannibalistic. They would feast upon each other when there is not enough food. The young adults, while leaving the pond for the first time, are about 2½ inches in size. 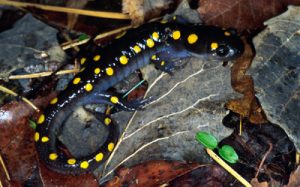 These reptiles are carnivorous, thriving upon food that includes different species of insects like centipedes, millipedes, crickets, worms, spiders, slugs, and the like. They have a sticky tongue to catch their prey. 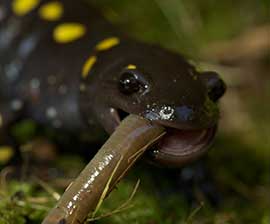 Predators: What eats the Spotted Salamanders

They most common enemies of the spotted salamanders are snakes, skunks, raccoons, turtles, chipmunks, squirrels, and opossums.

The Yellow Spotted Salamander has poison glands in their skin, mostly on the back of their necks and tails. These glands secrete a white, sticky toxic liquid when the salamander is threatened.

The Yellow Spotted Salamander is not a threatened/endangered species, and their population is considerably static. The IUCN 3.1 has categorized them under the ‘LC’ (Least Concern) species list.

One response to “Spotted Salamander”