Black salamander is one of the rarest species among the salamander family. It is almost extinct by now, and thus has become a rare sight. With very few adaptive and defensive features this is the humble most species amongst the amphibians.

Head : Black salamander has triangular shaped head like all other species of its family.

Body : This salamander is slim and slick bodied. Their toe tips are round shaped.

Black salamanders have many similar behavioral traits of other common salamanders. 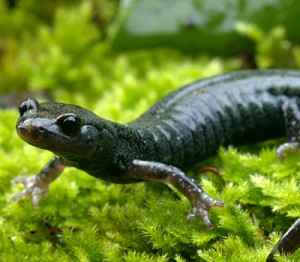 Most of the carnivorous an omnivorous species of animals which are bigger in size than the black salamanders, are their predators. For example, garter snakes are one of their most common predators.

Black salamanders do not have many adaptive or defensive abilities. They tend to utilize the following ones when needed.

During mating season the male black salamanders wander about in ponds and other water bodies in search of prospective mates. When prospective females come near them, the males dance and wave their tails. Then the males, with their hind-limbs, grab the females around their bodies and again let them go. Then they start moving before the females again. After this act, the males drop their germ cells somewhere at the bottom of the water body. The females go to the place where the germ cells have been dropped and take them inside their bodies to let their eggs mature. 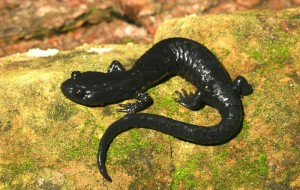 Black salamander hatchlings are left unprotected since their egg stages. They come out of their eggs with good vision, active mouths, and very strong tails like adults. Their gills on both sides of their heads enable their breathing ability under water.

Limbs of the young black salamanders grow after 20 days from hatching. Gradually as the young ones grow in size they acquire crawling and swimming ability.

The young black salamanders start metamorphosing after 60 days from hatching. Their gills and tail fins disappear during this time. Even their colors change from original ones to the adult-like colors, which is black with some spots on them. It takes almost 2 years to metamorphose completely into their adulthood.

On the first spring season after reaching adulthood, the black salamanders start searching for their prospective mates in water bodies.

Black salamanders have been observed to live for about 15 years in captivity. Their life span in the wild is not clearly known, but is assumed to be around 12 years.

There are two sub-species of black salamanders :

Black salamanders can be very good pets. Taking their care is also very easy. Take little care of them and they can be the best pals around to play with.