Blue spotted salamander is one of the cutest species of salamander family. Its sleek and slimy body is adorable. They are quite habituated and comfortable to human inhabitation disturbance around their territory. Do not be scared the next time one of these tiny, slimy things are seen on the neighborhood park bench or store room bunks. This species of salamander is very interesting to observe. Find all about this species in the article below.

Length : Blue spotted salamanders are about 8 cm to 14 cm long. Tails of these salamanders make 40% of the total size of their bodies.

Color : As the name suggests these salamanders are blue in color. They are ark bluish-black almost. There are some bluish white dots on its body sides and tail. Beneath sides of their bodies are pale colored.

Body : They have elongated bodies, with oval shaped belly part and slick tails. Males of this species have longer and flattened tails than the females.

Limbs : They have two pairs of limbs. One par in front and one air at the back. Their toes are long. There are four toes on their front limbs and five toes on their hind limbs. 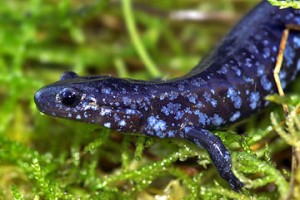 These salamanders are carnivorous. They typically diet on earthworms, snails, spiders, slugs, centipedes and many such small invertebrates and insects.

Blue spotted salamander is very interesting a species to observe. Their behavioral characteristic is as attention grabbing as their looks.

These salamanders prefer inhabiting swampy woodlands, wet, damp, hardwood and deciduous forests. They are found in open fields and coniferous forests. During breeding season they tend to inhabit temporary pools where there is water till late summer. They tend to look for leaf litter, logs, rocks and under-brush for shelter round the year.

This salamander has a very unique adaptive feature. It lashes its tail back and forth. Then it swirls itself into within the tail. It secretes a toxin from its tail and releases into the predator’s mouth, when the predator tries to grab it. Even if the predator survives that toxin and still holds on to the tail, then the salamander shreds its tail off from itself. The tail grows back again later with time.

Early spring is the peak mating season of these salamanders. 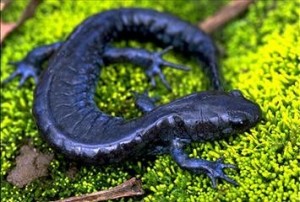 Blue spotted salamanders start reproductive interactions since the age of 2 years. They choose one of those abandoned temporary ponds as their mating site. The male salamander rubs his chin on head of the female, grabbing her close to him by his front limbs. Then he leaves some germ-cells on the bottom of the pond and positions the female above the place where his germ-cells are. The female takes those germ cells inside her body and her eggs germinate.

Female salamanders attach their eggs behind some rocks or rooted aquatic plants and not floating ones in order to keep the eggs from the sight of their predators. These salamanders lay about 490 eggs every year. The eggs hatch almost after a month after laying.

Eggs of the Blue spotted salamanders hatch after about a month. The larvae come out with active mouths and open eyes. Their front limbs emerge after a fortnight and after the third week they acquire the hind limbs.

The young salamanders reach their full salamander stage from the larvae state during late summer.

These salamanders have been recorded to live up to 32 years in captivity. They survive minimum 12 years in the wild.

Almost all salamanders have the same care sheet. Please refer to the Black Salamander article.

This species of salamander has been listed as Least Concern by IUCN.

Take a quick review of some of the most interesting facts about the Blue spotted salamanders.

Here are some fabulous Images of these amphibians: 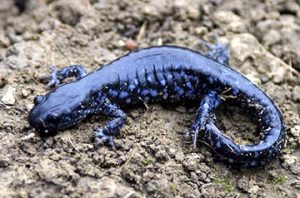 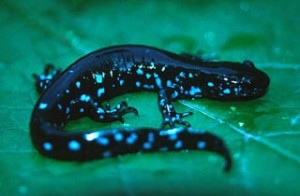