Jefferson Salamander was first found in the 1800s. It was named after Jefferson College in Pennsylvania. The name indirectly honored Thomas Jefferson, the renowned naturalist and the third president of the United States.

This species is primarily found in some parts of North American continent. In the United States it ranges from southern New England, southwest through Indiana, Kentucky, Virginia and west to Illinois. In Canada it is found in Niagara Escarpment, the southern part of Ontario and the western part of Oak Ridges Moraine, north of Toronto. 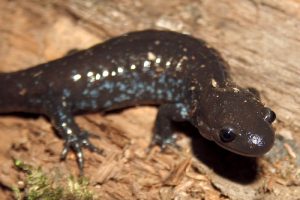 Jefferson Salamanders are selective about the place where they live. Its hard for this species to pick a new place for living and this makes their life so vulnerable. Jefferson Salamander prefers undisturbed wild or semi wild moist woodlands and well drained upland forests. This creature is partly nocturnal. Outside its breeding season it spends most of the time by hiding in the ground, under leaf litter, or staying under debris near pond or marsh. Around 40 -50 percent members of this species die in hibernation as they spend their time in areas that are too cold for survival.

The most distinct feature in its character is its stubbornness to move from one area to another. It is so stubborn that it may not move more than a mile in its lifetime. When attacked by a predator, it defends itself by different kinds of tail movements and body posturing. This creature produces toxic ooze from its skin glands, which is at the base if its tail. At times it will curl its head under the tail to form a coil.

It is known to live around 5 – 7 years, though it may go up depending on the condition of its habitat.

It feeds on beetles, worms, spider, snails, insects, centipedes and other invertebrates. The larvae feed on zooplanktons and aquatic invertebrates. 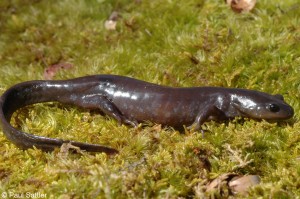 It is one of the earliest breeders.  Mating happens once in a year, generally starting from late March to April. Jefferson Salamanders migrate to ponds, swamps for breeding. It is reposted that females may skip one or two years before it breed again whereas males breed every year. Females start to lay eggs after 2 – 3 days from mating. Females lay around 5-50 per clutch. In one breeding season females may lay around 100-250 eggs. The eggs are attached to vegetation, and sizes around 2 – 3 mm in diameter.  The length of incubation may take 3 – 12 weeks depending on temperature and natural conditions. Newly hatched larvae can be up to 1.5 cm in length in size.  It is dark in color with a broad head. The larvae generally feed on aquatic invertebrates. The larvae transform itself into a terrestrial salamander within around three months. Fully transformed individuals sizes around 4.5 – 5.5 cm. It takes two to two and a half years to reach sexual maturity.

Its predators include variety of animals like owl, snakes, raccoons etc. The eggs and the larvae of this creature are particularly vulnerable due to predation, especially by aquatic invertebrates and other ferocious predators.

Here are some interesting facts about Jefferson Salamander-

Jefferson Salamander is not listed among endangered species. Habitat loss is the biggest threat to the survival of this species. The biggest threat to this creature is the expansion of cities, as it is losing its habitat and especially its breeding ground. During migration a large number of Salamanders killed by cars and other automobiles on the road. In some isolated pockets the tiny population of this creature is threatened due to natural disasters and catastrophes. Overwintering, in few places, is also a huge concern.

Here are Some Pictures of Jefferson Salamander: 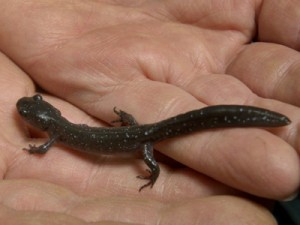