Southern Leopard Frog is quite similar to Northern Leopard Frog.  It belongs to the Ranidae family of true frogs. They are primarily nocturnal animals and found in green and brown colours with different spot patterns on their back.  Their spots are smaller than the Northern Leopard Frogs. The spots are round shaped.  They have light stripe along their jaw. The belly is plain white and groin has a greenish wash. They have a sharp pointed head.  These can be 3.5 – 5 inches in length. The males are smaller than the females. However, they have enlarged forearms that increase chances of successful reproduction. Males have paired vocal sacs. They are excellent jumpers and typically escape predation by jumping into the water and swimming to the bottom. They have a lifespan of three years.

Leopard Frogs are mainly found in the south-eastern part of the United States. They range from eastern Texas to Oklahoma in the east they range from New York to the coast of Florida. They can also be found in other North American states like Indiana and Illinois and southern states like

They are primarily limited in these states because of the higher elevations of the Blue Ridge Mountains. 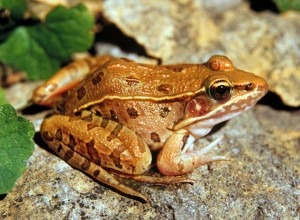 Southern Leopard Frogs are mainly active during nights. During the day, most of the leopard frogs hide among plants on the shore. They prefer any freshwater location like

They opt for locations with plenty of vegetation nearby so that they can camouflage and save themselves from their predators. Sometimes, you can spot them in brackish water along the coast side.  During rainy weather they can be seen crossing the roadway. When they move far away from wetlands, they may absorb dew to keep them moist.

Leopard frogs are carnivorous and prefer small worms. They consume worms and insects such as earthworms, spiders, centipedes. They also feed on aquatic invertebrates like crayfish. Their food habits are similar to that of the Northern Leopard Frogs.

After mating, adult frogs wander away from the water and hide into nearby plants of under the logs. Female frogs lay egg masses in shallow water. A single female may lay 3000 to 4500 eggs in a round mass. Egg masses are typically partly floating and attached to plants. Egg diameter ranges from 1.5 – 2 mm. 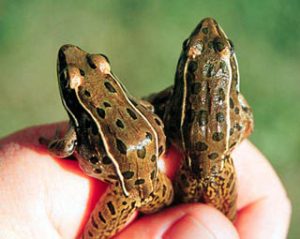 The eggs hatch after a few weeks and tadpoles take about 90 days to begin transforming into adult. Newly hatched tadpoles are only about 20-25mm long and grow up to 60-70mm long before metamorphosing into frogs. Tadpoles eat small organisms in the water including insect larvae and water fleas. Emergent vegetation and plants work as a cover for tadpoles. The tail of the tadpoles bears dark spots when metamorphosis is imminent. Tadpoles transform into adult frogs by late spring or early summer. Once transformed, a young frog happens to be around 20mm in length. Tadpoles and eggs are vulnerable and may be eaten by insects, turtles, fishes, snakes etc.

Leopard frog produces a series of short throaty croaks at a rate of 10-12 per second. During the mating season, males call while they are on land or even when afloat. Their mating call is a series of harsh deep croaks.  They use a variety of calls during the mating season. The mating call of the Southern Leopard Frogs is a familiar background sound for many people, who live near pond or streams. At times, males also use visual cues while competing for females.

Read about some interesting facts associated with this creature. 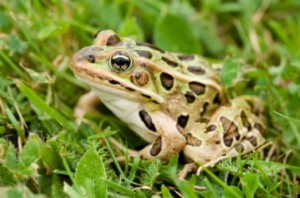 Because of their presumed large population, they are listed among the least concerned species. It is very unlikely to see this species in a threatened category in near future largely, due to their abundance South – Eastern region in the United States.

Southern Leopard Frogs play a valuable role in the food chain by preying upon smaller frogs, insects etc. On the other hand birds, large fish, turtle, heron, snakes, raccoons prey on them.