The secretary bird or secretarybird is a bird of prey found widely across Africa, belonging to the same order as hawks, vultures, kites and harriers. The etymology was initially believed to have been given because of the similarity in its appearance to a secretary with pens behind the ears. Recent arguments have however suggested that the name may have derived from the Arabic name given to the bird, saqr-et-tair, meaning hunter-bird. It is also known as ‘serpentaire’ in French. 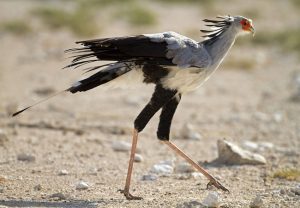 Color: They have gray plumage with some white feathers, black feathers of flight on the wings, black-tipped feathers in a crest on the back of the head; red or orange face; whitish-gray beak; pinkish legs. The upper portions of the legs have black feathers which give the impression as if the bird is wearing shorts. 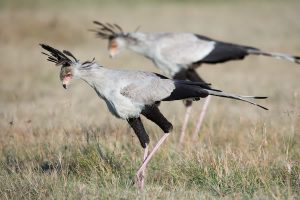 Their range extends from The Gambia and Senegal in the west to the east in Ethiopia and southwards down to South Africa. 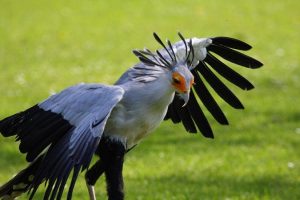 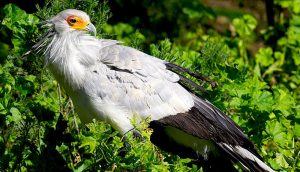 Secretary birds form monogamous pairs that are believed to mate for life. Breeding usually occurs on the ground, while some couples may choose to mate in trees. They mate throughout the year, but peaks are observed between August and March. A saucer-shaped nest is prepared on a tree for the eggs. The nests may be used year after year depending on its sturdiness but if it becomes too heavy for the branch, it is abandoned. 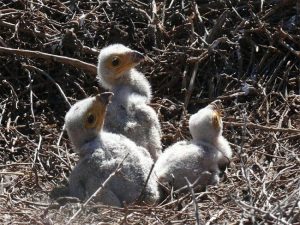 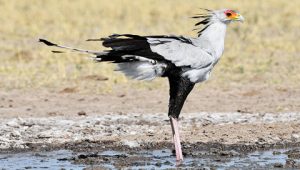 1-3 eggs are laid at intervals of 2-3 days. Incubation is done by both partners, it begins after the first egg is laid and continues for up to 42-46 days.

It takes the chicks up to six weeks to stand, and by the seventh they become feathered. They are soon taught how to hunt by the parents, after which they may be allowed to linger in the parent’s territory for a certain amount of time before heading off on their own.

Secretary birds survive for 10-15 years in the wild, but this can go up to 19-20 years in captivity.

They are a silent bird for the most part. When calling, they make a croaking wail that can be heard from long distances. During courtship, this sound is coupled with a long-drawn growling sound. A softer tone of this sound is utilized when feeding the babies. They may also whistle occasionally. 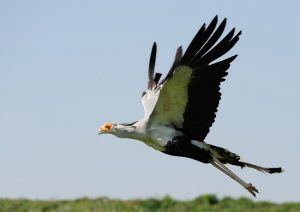 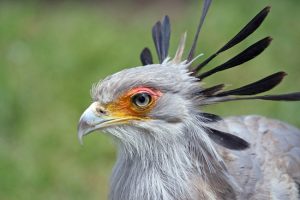 A secretary bird is a carnivore with a wide range of prey-base. Arthropods like grasshoppers, spiders, beetles, wasps and scorpions make up the majority of their diet. They also eat small mammals like rats, mice, hares, mongooses and hedgehogs. Smaller birds and their eggs, amphibians, crabs and reptiles like lizards and snakes also regularly become food items for the secretary bird.

Venomous and dangerous species of snakes like adders, cobras, green and black mambas are occasionally killed and eaten by this bird, but not as frequently as is widely believed. 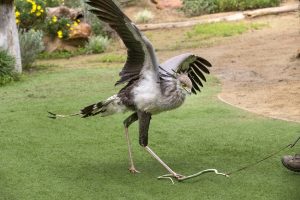 Eggs and baby secretarybirds are preyed upon by crows, kites, eagle owls and ground hornbills. Adults do not have any predatory enemies.

The secretary bird is classified as ‘Vulnerable’ on the IUCN Red List. 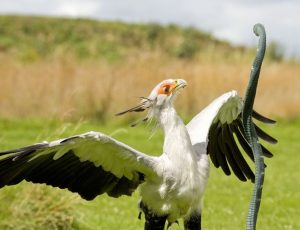 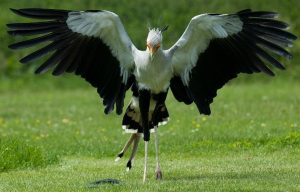