The Rothschild’s Giraffe, also known as the Baringo or the Ugandan giraffe, is a subspecies of the common giraffe found in the jungles of Africa. Compared to other subspecies, they are known for their greater height and beautiful red patch coat. However, the population of this type has gone down extensively, with a 2016 estimate showing about 1671 of them remaining in the wild.

Sexual Dimorphism: Present, but not a guaranteed sexing indicator.

Size/Length: These animals stand taller than many other populations, reaching a height of 5.88 meters (19.3 feet). The males are larger than the females.

Weight:On an average, they weigh about 2,500 pounds, with the females being a few hundred pounds less than the males. 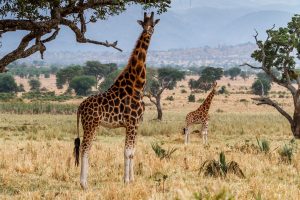 Fur/hair/coat/pelt: Unlike the reticulated giraffe, these giraffes have orange-brown patches are less jagged but with a sharp shape. The connective channel has a cream hue and has no markings on the lower legs. This gives an impression of white stockings worn on the feet.

Ossicones: There are five ossicones (horn-like structures) in this subspecies, with two larger ones common to all giraffes, a third one at the center of the forehead, while the remaining two behind each ear.

The life expectancy of the Rothschild’s giraffes in the wild is 20-30 years.

These giraffes are spread in scattered populations in several African countries to the south of the Saharan desert, mostly in Uganda and Kenya.

Habitat: Where do Rothschild’s Giraffes Live 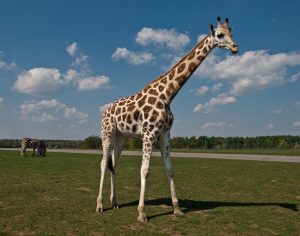 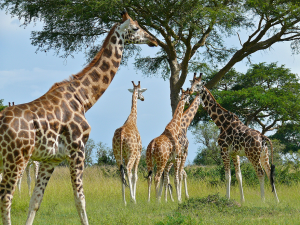 Rothschild’s giraffes are social creatures that primarily live in loose herds with members usually ranging from 10 to 20, including bulls (males), cows (females), and calves (babies), or just mixed genders belonging to all age groups. In a group, any individual is free to join or leave at their will.

These mammals are considered dumb because of their proneness to remain silent. They communicate with each other using infrasonic sound. However, the notion is not true, since they do vocalize, though rarely, by means of whistle-like calling, flute like sounds, snoring, hissing, low grunting, and moaning that they use to alarm or warn others, to call or search for a calf, or even for a calf bleating or mewing back at the mother as a return call.

They have a very sharp vision and are able to locate approaching dangers, like predators/enemies, from a considerable distance. The individuals from a group often stay scattered, especially when they are in preferred grasslands, or where there are sufficient food and water. The animals would only cluster together when there is a common need for something or when they are threatened or attacked.

Diet: What Do Rothschild’s Giraffes Eat

These are herbivorous animals that primarily feed on thorny acacia trees and other similar plants and trees.

Giraffes are polygamous in nature. The males need to fight with each other to attain the right to mate with a female partner sexually.

Interestingly, they do not have a particular mating season, and it can happen throughout the year. However, most giraffe births take place between May and August. The gestation period of the females is about 457 days, after which they give birth to one single calf of about six feet.A female giraffe usually breeds every 20 to 30 months. 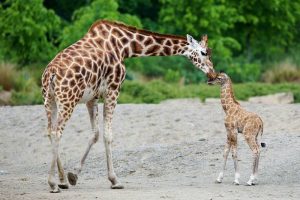 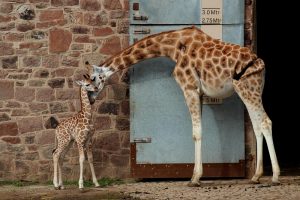 Mother giraffes deliver its baby either standing up or walking, while the newborn giraffe drops 2 meters to the ground. Usually, only a single baby is born at a time, though incidences of the birth of twins have been recorded, but quite uncommon.

Soon after the birth of the offspring, the mother and its calf detach themselves from the group for about 10 to 30 days. They finally return to the herd though, wherein the rest of the group members accepts the new member.

The juvenile needs some time to stand on its feet, around 15-20 minutes, after which it begins to suckle its mother. They take almost 1 to 16 months for them to wean. The period of becoming independent, however, differs between the male and the female babies. While the cows usually stay within the herd, the bulls go solitary and spend time alone unless they find their own pack and eventually turn into a dominant male.

The age of sexual maturity of the young female is 3 to 4 years. However, they would not breed unless they are around five years old. The young male giraffes become sexually active a little later, at approximately 4 to 5 years of age, and they begin breeding only after they are around seven years old. 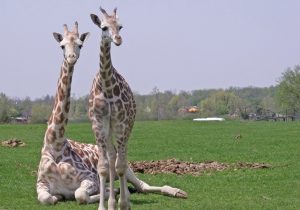 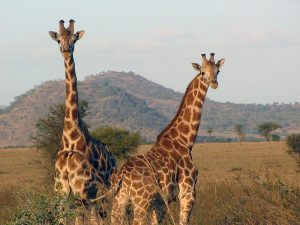 The main predators of the Rothschild’s giraffe are lions, hyenas, leopards, crocodiles, etc., living in the jungles of Africa.

The IUCN 3.1 has listed them under their Endangered (‘EN’) category. Today, these giraffes are endangered because of factors like predation, and severe problems like poaching. 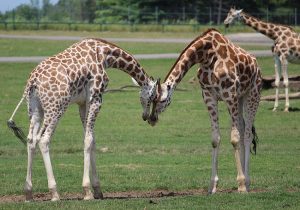 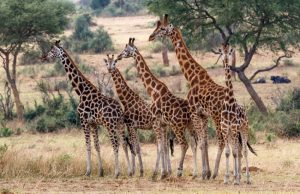