Pink Footed Goose is a highly migratory species found in west European region. In north-west European countries, the arrival of these migrating bird signals the beginning of winter. This bird is popularly known as Pinkfoot by locals.

This medium sized goose is around 65 – 75 cm in length and weighs about 2 – 3.5 kilo-grams. Their wingspan is 130 – 170 cm. They have short pink colored bill. The body color varies from dark brown to grey brown. The color of neck and head is generally richer then the body. The upper region of their tail is grey and the lower region is white. Once this species is thought to be closely related with Bean Goose as both these species share a similar pattern bill, but the only difference is in their color of feet and bill.

How to Identify Pink Footed Goose?

It is not right to identify a pink footed goose only by the color of its feet. The Greylag Goose also has pink legs and young Pink Footed Goose have light orange legs. The easy way to identify this bird is by looking at its relatively small head, short legs and short bill with black and pink markings. 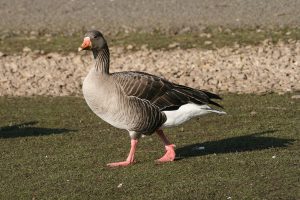 During the breeding season, they inhabit cliffs, riverbanks, crags and hummocks where there is plenty of vegetation. During summer, they prefer to inhabit wet meadows, rivers and tundra lakes.

They make their nest in a place where other predatory species find hard to inhabit. The nest is made by forming a low mound with vegetation on rocky hills and cliffs. They are also seen nesting on islets.

They are social bird outside its breeding season. During autumn, they form large colonies and the number goes up to 5000 in some regions in the United Kingdom. At times, these groups get divided in small groups for foraging during daytime.

They get very vocal when they fly in large skeins. This bird produces a series of high pitched earsplitting calls. 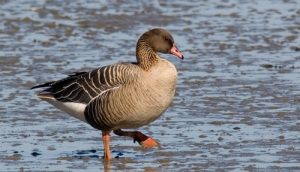 This herbivorous bird is an opportunistic feeder. During winter, they graze on sugar beet, potato, oilseed rape and various kinds of grasses. During breeding season this species feed on berries, stems, sedges, mosses, roots, leaves various kinds of tundra plants both in water and land.

Pink Footed Goose reaches their sexual maturity at the age of 3 years. Their breeding season starts from mid-May and continue till late-June. The three main breeding grounds of this species are Iceland, Greenland and Svalbard. They breed in loose colonies or isolated pairs. During this time, they prefer to breed near sea bird colonies.

Females lay around 3 – 6 eggs in mid or late may. When female incubates, male stay near the nest and guards his mate. Incubation lasts for 25 – 27 days. Goslings follow their parents to the nearest water body to fledge around 55 – 60 days.

After breeding, they go through a molting period which takes around 25 – 27 days. They stay close to open water during this period.

They are known to live around 8 –  10 years. The maximum age recorded of this species is 38 years 7 months 7 days.

Their main predator is Arctic Fox as it tend to prey on fresh laid eggs.

The population of this species has increased significantly in last 50 – 60 years, mainly due to regulations of hunting in migrating grounds. The Great Britain migrating population is about 250000 – 300000 that was only about 30000 – 40000 during 1950s. The number of Svalbard population has also increased.

Pink footed goose is considered as a Least Concerned species by the International Union for Conservation of Nature (IUCN).

Here are some pictures of this beautiful bird: 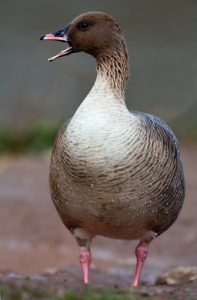 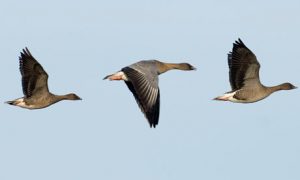