Manx Shearwater, a coastal migratory seabird, is a member of the shearwater family that consists of more than twenty different species. This is the most common shearwater species found around United Kingdom. Their numbers are declining despite having an extremely large range

Color: The upper part of their body is dark and the underside is pale white. Their bill is long, thin and black. The species can easily be distinguished from the Little Shearwater, as Manx Shearwater’s eye zone is completely dark. 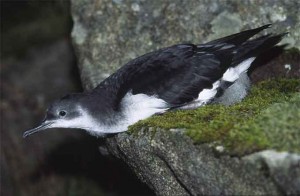 This species is a speedy flier as well as a superb glider with quick directional change ability. They tend to glide with wind currents instead of flapping their wings continuously. They have a very strong and rapid wing beat. During daytime, they can be spotted flying near the water surface with their wing tips almost touching the water level.

This bird is generally silent when present at the sea, but the breeding colonies come alive at night with their unique call. They produce a raucous, loud, chuckling, eerie, high pitched sound like ‘sgack – cack – ck’, which gives a supernatural feeling. That is why they have earned the name “devil bird”.

This species breeds in the north Atlantic region, with large colonies on the Ireland and United Kingdom Atlantic coasts. Huge colonies of these birds can also be spotted on the islets off Massachusetts in the United States, Westmann Islands in Iceland, Newfoundland in Canada, Azores in Portugal and the Canary Islands in Spain.

The largest breeding colony in North America is in Middle Lawn Island in Newfoundland. Vagrant individuals and small colonies can be seen in countries like Côte d’Ivoire, Ghana, Australia, New Zealand, Sweden, Switzerland and many countries.

They build their nest in deep valleys on small islands close to the mainland. They prefer to stay near cold water. Non breeding Manx Sheawater birds tend to stay on the surface. They often share their crevices or burrows with puffins or rabbits.

During winters, this species migrate more than 10000 km to the coastal regions of South America. They cover their migration distance in less than a fortnight. In early spring (late Feb and March), many shearwaters start to move northwards to return to their native places.

Manx Shearwaters are known to travel more than 1 million kms during migration in its entire lifespan. 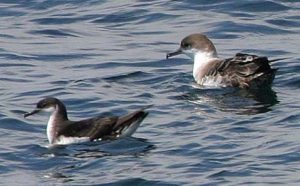 Manx Shearwater feed on small pelagic schooling fish (especially sardines, sprat and herring) small crustaceans, squids, molluscs, cephalopods, planktons and floating offals. They catch their prey from the surface of the water and can also dive to large depths into the water for predation. They can be seen searching for food in small groups and even individually.

Their behavioral traits are very interesting to observe-

Manx Shearwater reaches their sexual maturity at the age of 5 years. They spend most of their life in the sea and visit land masses during the breeding season in summer. They tend to breed in an underground burrow or a deep nest in the rock, on uninhabited and densely vegetated island, devoid of predatory species. The breeding ones dig burrows that can be up to 5 feet deep. At nights the breeding colonies become lively.

A Manx Shearwater pair spends several weeks together before the female lay a single egg, which is about 15% of the body weight of the bird. Both the male and the female take part in the incubation process that lasts around two months. Parents stay with the hatchling for another 2 – 3 months before abandoning it permanently.

About a week later the youn,g bird leaves the nest and heads-off to the seas alone. At times, other young birds join together to form a small group. The largest breeding colonies are found in Britain.

This bird has a long life span of more than 20 years. In 2003-04, a breeding Manx Shearwater bird on the Copeland Island in Northern Ireland was recorded to have lived for around 50 years.

This species cannot walk on land, they can only drag themselves on the ground and the burrows. This trait makes them vulnerable to their predators. The predators of this species include large rats, large birds of prey and stoats along with almost all big mammals.

The following adaptive features helps this species to survive.

Manx Shearwaters has a large range and the global population of this species is about 550000 to 600000. The number has increased in some protected European colonies in recent years. This species is listed under the Least Concern category by International Union for Conservation of Nature (IUCN).

Here are some interesting facts about Manx Shearwater

Here are some pictures of this beautiful species : 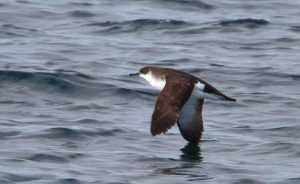 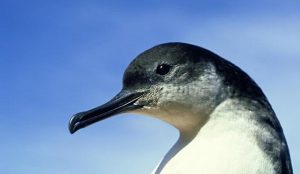