Mandarinfish (not to be confused with Mandarin Fish), also known as Mandarin Dragonet, is a small-sized, bright and multi-colored sea fish, mostly nocturnal, belonging to the dragonet family. It is a popular saltwater aquarium fish.

Size: Mandarinfish is categorized under small-sized fish with very little weight, and reaching only around 6 cm in length, but at times, up to 7 cm.

Color: This fish has brilliant pigmentation reflecting various colors and hues of cyan, purple, green, yellow and rarely red, with orange wavy lines upon a blue background; although some individuals with other variations are also found. Their body also consists of light-reflecting cells.

Head and body: Mandarinfish has a depressed and broad head. This gives their body a very unusual shape. 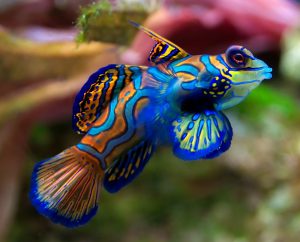 They are found in the Indo-Pacific Ocean (Western Pacific) and in the Coral Triangle of biodiversity including Indonesia, Malaysia, the Philippines and Australia, including the Great Barrier Reef.

The natural habitats of mandarinfish are inshore reefs and shallow protected lagoons, and are found mostly under dead corals or near the rubble beds of the ocean. They are usually found at depths of 1 to 18 meters.

In the wild, mandarinfish are carnivorous by nature, preying mostly (and almost only) upon live creatures like small worms, protozoans and crustaceans like munnid isopods, amphipods and copepods, but also, at times, their food can be other benthic organisms.

Mandarinfish are peaceful by temperament. During daytime, the mandarinfish are quite reclusive by nature, however, at times, they can be seen perching or hopping atop corals. They move by briskly pulsating their fins, which reminds of a hummingbird. Being shy by nature, they hide themselves under corals or in sand bed when threatened, or at night. They tend to avoid any kind if bright light. 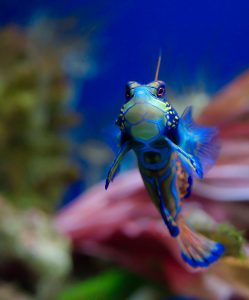 Very little is known about specific predators of mandarinfish. Although, scorpionfish can lie waiting to attack mandarinfish, especially during their mating ritual.

The differences between the male and the female are that, while the first dorsal fin of the male is clearly visible and very elongated, the females lack this elongated spine. The male has more orange pigmentation on its face and is larger in size than the female. 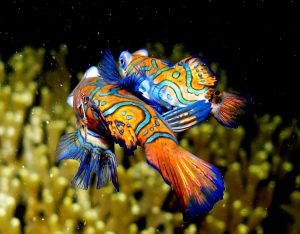 The reproduction and breeding of these fish can occur weekly, throughout the year. The mating ritual of the mandarinfish is very exclusive. Prior to sunset, around 3 to 5 females gather where the males visit for courtship in a particular region of the coral reef. These males can even tour around various regions in a single evening and spread their sperms among multiple females. 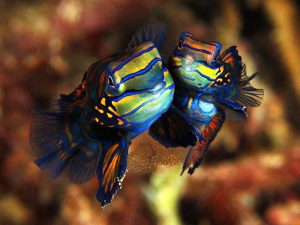 The female will join a successful male, clinging to its pelvic fin. The pair will join together belly to belly and rise above the reef almost a meter. At the peak of their ascent, they will release a cloud of about 200 eggs at a time and sperm. Soon after, the couple immediately disappears.

After the act of copulation, the eggs take around 18-24 hours to hatch. At this time, the larvae are about 1 mm in length. These infants will remain as planktons for around 2 weeks, and devoid of parental care. Then after, the juvenile mandarin fish finally settle on the reef, finding out an appropriate environment, where they can live permanently.

The average lifespan of mandarinfish is 10-15 years.

Mandarinfish are moderately hardy. As aquarium pets, keeping mandarinfish in tanks is tough especially because of their specific eating habits and the optimum temperature required to survive, without which, they often die.

Tank size: The tank meant for mandarinfish should hold at least 30 gallons of water.

Environment: The tank for mandarinfish should be equipped with corals, live rocks, live sand and plenty of hiding places.

Lighting: Mandarinfish enjoy staying away from light sources, and hence, no special lighting is required.

Temperament: Mandarinfish are not aggressive to other species, however, two males turn aggressive to each other, if kept together. So, no more than 1 male (combined with 1 or more females) can be kept at a time.

Food: Feeding mandarinfish can be a major issue. While some might consume frozen brine shrimps and bloodworms, others might refuse to take anything else other than live foods like amphipods and copepods. However, one can try giving them different kinds of foods like formula I, and formula II, worms, flakes, live brine or prepared food for fish. 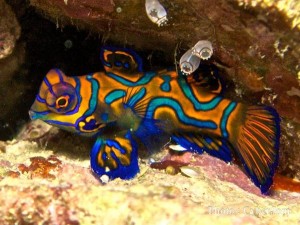 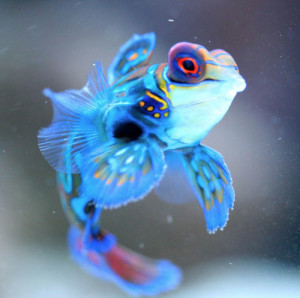 Currently, the mandarinfish does not have any special conservation status. 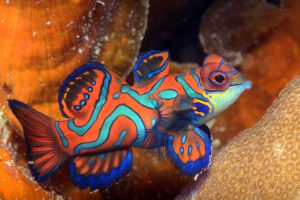 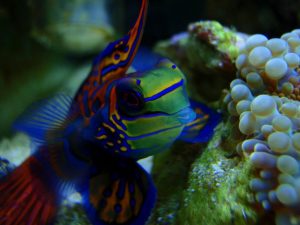