Little owls are true owls with a wide distribution throughout the warmer parts of Eurasia and North Africa. They have a stocky appearance with bright yellow eyes.

Size: These owls are around 8.7 inches (22 centimeters) in length.

Color: They have a browning-grey plumage with bars, spots, and streaks of white. The undersides are paler with streaks much darker than those above.

Wingspan: When unfurled, their wings can measure around 22 in (56 cm). 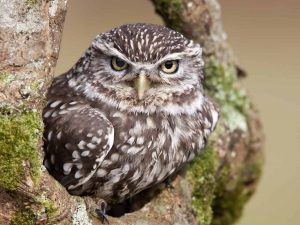 There are 13 subspecies of the little owl, spread throughout North Africa, Europe, and Asia. They have also been introduced to the England, Wales and New Zealand.

They inhabit a wide range of semi-open areas, including farmlands, stony deserts, steppes, urban areas, and open woodlands. They can be seen in both temperate and tropical regions at elevations of usually 9,840 feet, but sometimes as high as 11,800 feet.

They feed on insects, small birds, mammals, reptiles, and amphibians. Insects form the overwhelming majority of their diet; crickets, beetles, earthworms, and earwigs are particularly preferred. 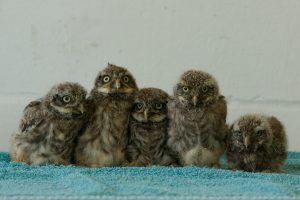 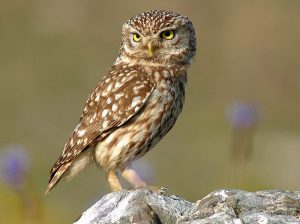 The breeding season occurs between March and August. They form monogamous pairs that stay together for as little as a year to as long as until one of them dies. Clutches consist of three to five white, elliptical eggs. The female incubates the eggs for around twenty-eight to twenty-nine days.

The hatchlings, or chicks, are fed by the mother while the male brings in the food. After a few days, both parents take part in hunting and feeding. The chicks become able to leave the nest by the time they are seven weeks old and start flying one to two weeks after that. They reach sexual maturity at one year of age.

They can live in the wild for 16 years.

Their call is a whiney ‘kiew kiew.’ They also make whistles and trills. Vocalizations are at a peak during the breeding season.

Despite the above anti-predator adaptations, the diminutive little owl is preyed upon by larger owls, raptors, and mammals like foxes, pine martens, dogs, and feral cats. Common genets and stone martens often rain little owl nests. Chicks and eggs may be taken by magpies, crows, stoats, hedgehogs, and brown rats. 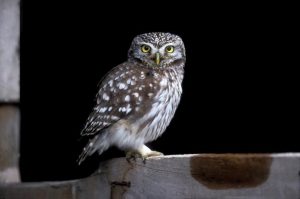 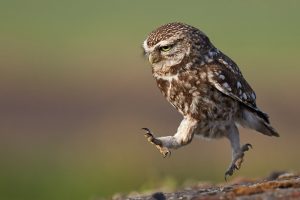 The little owl is classified as ‘Least Concern’ by the IUCN.