Least Bitterns is one of the members of the heron family. They are shy birds which are often heard than seen as they stay hidden in the marshes. They cling to the reeds with both their legs and stay motionless waiting for their prey. Least bittern were first introduced by J. F. Gmelin in the specimen from Jamaica in 1789.

Least bittern is a small member of heron family. The adult male has a glossy green plumage at the back. Their wings are grayish brown with yellowish-brown at the tip. Their crown and tail is greenish-black. Their wings are buffy and flight feathers are dark. Their underbody is fully white with light brown streaks on the throat. They have a light brown face with yellow eyes and a long yellow bill. They have greenish-yellow legs with yellow feet. 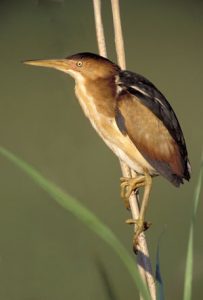 The female have darker mantle and crown and duller color wings than that of the male. The juvenile have paler crown with more prominent streaks on its back and chest. The bill is dull yellow or paler pink.

Least Bittern are found abundantly in North, South and Central America. It ranges from southern Canada to Florida and west to Kansa in North America. In winters they are found in California, Panama, Columbia, Texas and Florida. Parts of Canada like Ontario, New Brunswick, southern Manitoba and Quebec.

Least Bitterns are usually seen in freshwater or brackish water marshes where there is tall vegetation with dense fringes. They also live in lakes, pools and mangroves.

Least Bittern stands motionlessly, clinging to the stem of the vegetation. Its legs wide apart and its long toes and claws which are light weigh, allows it to balance its position. It stoops its neck low with the bill almost touching the surface of the water. Once it spots its prey, it strikes them down with its pointed bill.

Least Bittern is a shy bird. They are often heard than seen, as they hide in the marshes most of the time. When approached by an intruder, they stand still with their bill pointing upright or run away, instead of taking off. In this position it is easily camouflaged and it may even sway from side to side imitating the swaying reeds. It flies short distance and goes back to the marshes. Its movement is quick and graceful. They shoot their head forward with each step.

Least bittern calls are sharp and explosive “kak-kak-kaka”. Their mating call during spring sound like a dove “uh-uh-uh-oo-oo-ooah” and the female responds with “uk-uk-uk”. 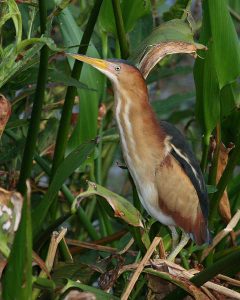 In summer, the least bittern breeds throughout eastern and central United States. They are found across southern Ontario from the Maine coast to Florida. They are found distributed in various places like Caribbean, Mexico, Dakotas and Central Texas.

Least bittern do not fly very long distance but it migrates during winter to the wetlands from Florida and Texas south towards the Caribbean and Central America.

Some of the predators of the Least Bittern include coyotes, foxes and the great horned owl.

Least Bittern requires large and quiet marshes. Their population has been adversely affected by human interruption. Habitat loss due to drainage of wet areas for recreational construction, conservation of farmland or construction for urban development has lead to their population decline. Recreational boating activity of humans during the nesting period causes high waves and destroys the nest and the chicks of least bittern.

Here are some of the pictures of Least Bittern 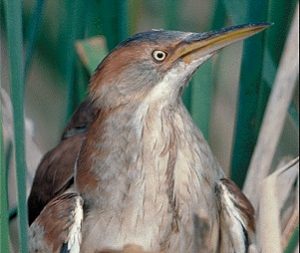