American Bittern is a medium-sized wading bird with a brown and white plumage. It is barely seen as it spends most of the time camouflaged in marshland vegetation but its distinctive call can be heard.

American Bittern has been given various names like “Bogbumper”, “Stake Driver”, “Botam Tauri” and “Grobek”.

American Bittern has a sturdy medium sized body. An adult American bittern has a brown plumage with fine black flecks. It has a rusty brown crown, dark brown outer wings and a lighter brown in the inner wing and the body. It has yellow eyes, a pointed yellow bill, stout neck and relatively short legs. It stands around 2.5 feet long from the tip of its bill to the end of its tail with 3 foot wingspan. It weighs about a pound. 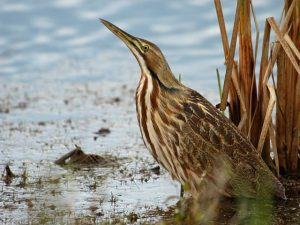 American Bittern are found across parts of United States and Canada. They range from Southeastern Alaska to Newfoundland, Canada, and California to South Carolina. They migrate during the winters to parts of Pacific Ocean, Gulf Coast, South Atlantic Coast, Southern Mexico and Caribbean.

American bittern has a life span of approximately eight years.

The breeding season starts from mid Aril to early may. Infidelity is common among the males and they have several females nesting in various locations in the same territory. The courtship of the American bittern is rarely displayed.  While mating, the male bends it back, shortens its neck and moves closer to the female. Their courtship is followed by an aerial display. They lay about 3 to 5 eggs. Incubation last for about 24 days.

American bitterns build their nest in isolated marshy areas and ground near the wetlands. Females build the nests which are raised 6 to 10 inches above the ground with grasses, sedges and reeds.

American bittern are known for their distinctive call. Their vocal has often been compared to a congested pump. Their low pumping calls are recognizable and can be heard during the dusk, around the marshes and lakeshores of Canada and United States. 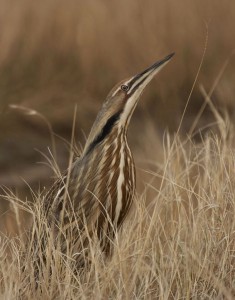 American bittern have avian predators like peregrine falcons and great horned owl. The eggs may be attacked by raccoons if they are accessible.

American bittern stands motionless with their bill pointed towards the sky. Their plumage provides them a camouflage in the marshes.

The population of American bittern has declined considerably over the years due to loss of habitat. The wetlands, marshes and swamps have been removed for construction of roads, bridges and commercial development. Degradation of its habitat due to chemical contamination, Eutrophication, human disturbance and siltation has reduced its habitat quality. Acid rain affects the wetlands; hence the food quality and the habitat of the American bittern are damaged.

American Bittern is a migratory bird therefore it is a shared resource by different countries. Measures must be taken by both the countries to conserve it. American bittern has been protected under the Migratory Bird Treaty of 1918. State of Michigan has enlisted it as the species of special concern. In 1987, US fish and Wildlife service, listed American bittern as a Nogame Species of Management concern.

Here are some beautiful images for American Bittern: 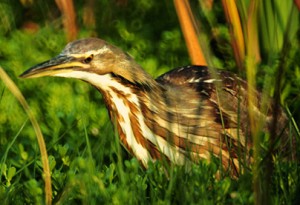 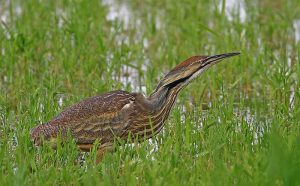 One response to “American Bittern”