The Humpback Anglerfish (also called humpback blackdevil and Johnson’s anglerfish) is a species of fish belonging to the ‘black seadevils’ family and are well-known for their bizarre, ‘angry-looking’ (often considered as scary) face. They move around with their characteristic bioluminescent spine that emits a diffused blue light in the dark waters. These interesting creatures are known to be one of the ‘ugliest’ animals on the planet.

Size: Females are outstandingly larger and can grow up to 18 cm while the males are usually dwarfed at a maximum length of only 2.9 cm, making them sexually dimorphic.

Body: The body is normally dark in color with shades in brown and grayish black. Their body structure is framed with soft bones and flesh.

Head: Since they have a huge head, the mouth is also large and crescent-shaped, filled with large teeth. The eyes and nostrils are also quite large. 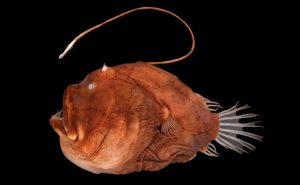 Teeth: There are lines of very sharp translucent teeth on both the jaws.

The longevity of this species of fish is yet unknown.

These creatures are found almost everywhere in the world, in the tropical to temperate parts of the oceans, especially in the South China Sea and the East China Sea.

The species is found in the deep waters of the world’s oceans at a minimum depth of 3000 feet where the environment is completely dark with the water being close to a freezing point because of the complete absence of sunlight.

Since these fish live at great depths of the ocean, it is quite difficult to study their detailed behavior. The male of the species is small with a very light weight, and is not predatory, while the larger size female is more dominant than their male counterparts.

The males do not have the ability to hunt their prey as ferociously as the females can. They are ambush predators and would sit and wait for their prey to come closer.

The glowing lure that the humpback anglerfish has on its forehead is used to attract prey. The fish use their lure by pulsing the light while moving it back and forth, attracting other fishes, crustaceans, etc. and capture them for food.

The primary food of these fish is other small fish, different species of shrimps (including the mantis shrimp), small squids and turtles, etc. 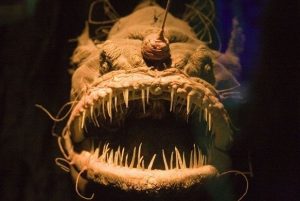 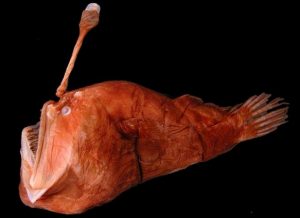 The males follow the strains of the scent of the body and the lure light to spot the females in the dark. Once found, the male attaches itself with the hooked teeth and begins to drink the female’s blood, supplying sperm to fertilize the latter’s eggs.

After a short mating, the male leaves its mate in search of another female for mating.  The reproduction of the humpback anglerfish occurs through the process of external fertilization (i.e., outside the body).  The female humpback releases its egg (ovum) into the deep column of water, while the male immediately releases its sperm, which then goes on to fertilize the eggs.

The female lays its eggs on a sheet of gelatinous material that floats on the water surface. Soon after, the eggs hatch to larvae, which feed on tiny planktons until they grow up considerably. When the larvae mature, they return to the dark depths of the sea.

The young males are conspicuously small, with only around an inch (3 cm) in length. Once they hatch out of their eggs and attain the minimum age of sexual maturity, they move on dedicatedly to search for sexual mates, clinging onto larger females with the help of their teeth, producing the next line of offspring.

No known predators of this fish have been recorded as yet. The humpback anglerfish are close to the top of the food chain and are mostly predators instead of prey. 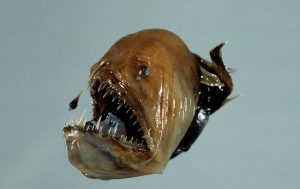 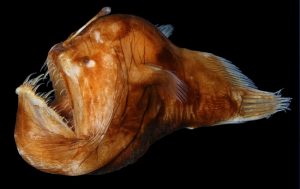 The fish has a static population, found almost everywhere in the world. Hence, the IUCN 3.1 has enlisted them under their ‘LC’ (Least Concern) category.