Egyptian vultures are old world raptors with a wide distribution from Western Europe to the eastern fringes of South Asia. They are alternatively known as the pharaoh’s chicken and white scavenger vulture. It is the only member of its genus. 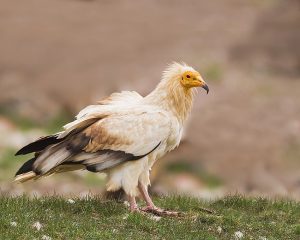 Color: They have white plumage with black flight feathers. The face has bare yellow skin. The beak is yellow at the base and black near the tip.

There are three recognized subspecies of this bird:

They inhabit deserts, steppes, pastures, and fields. They frequent locations near human settlements, including slaughterhouses, garbage dumps, and fish ports. 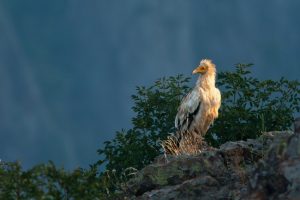 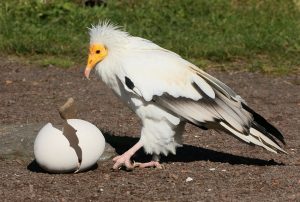 They feed on carrion, mammal feces, dung insects, small mammals and reptiles, snails, eggs of other birds, nestlings, as well as crustaceans. They are one of the few birds who use tools to their advantage. In case of eggs of larger birds like bustards and ostriches, they gather stones and throw it at the egg to crack it open.

Egyptian vultures breed in monogamous pairs. The nests they construct are large and refurnished all through the season. Breeding is done once every year. Females lay the eggs between March and May, and then both parents share incubation duties for the next 42 days. Clutches usually consist of two eggs. The second egg usually takes up to five days more than the first one to hatch.

The chicks are raised by both parents before eventually fledging after around 71-85 days old and disperse from their parents at 4 months of age. They become sexually mature when they are about 6 years old. 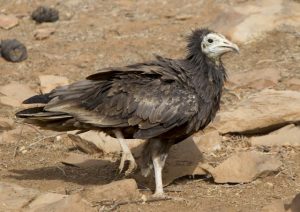 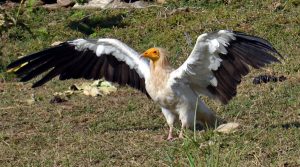 They live for at least 21 years in the wild, but in captivity, the oldest recorded Egyptian vulture was 37 years old when it died.

They make screeches while fighting over food, high-pitched mews and hisses during their time in the nest. Juveniles may make a hiss-like croak during flight. An angry or alarmed Egyptian vulture usually makes a growling sound. 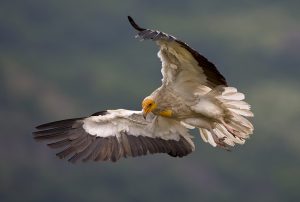 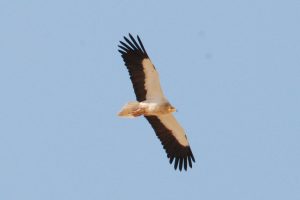 There are no natural predators of this bird in the wild. Red foxes, golden eagles, and eagle owls sometimes prey upon juveniles living in the nest.

Despite the wide distribution, the IUCN classifies the Egyptian vulture as ‘Endangered’. Habitat loss and persecution by humans have led to the decline in their population. 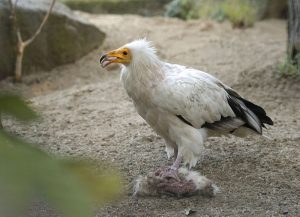 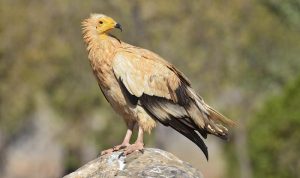