The Diamondback Water Snake is the largest North American water snake. Also known as the Diamond-backed Watersnake, it is an extremely common species of non-venomous snakes that is a member of the ‘colubrid’ family. They are often mistaken for the poisonous variety of the ‘cottonmouth’, owing to its biting habit. This creature is also misidentified as the venomous ‘rattlesnake’, or even a ‘water moccasin’, a species of pit viper, because of its dark pigmentation and irritable temperament, and is often killed out of fear. It belongs to the genus ‘Nerodis’, all of which are native to the continent of North America. 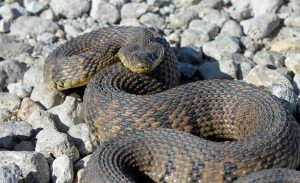 Description: What does a Diamondback Water Snake look like

Size (Length): Usually, these snakes grow up to 4.9 feet. However, the record length was found in the southern states reaching the length of 8.2 feet.

Weight: The diamondbacks are quite heavy-bodied, when adult.

Skin: The snake has a rough-textured skin, which is because of the heavily-keeled dorsal scales that are arranged in 25 or 27 rows at the middle of its body. Normally, there are 3 postocular scales. This snake has a reticulated dorsal pattern.

Color: Typically, the background color of these snakes is light olive-brown along the dorsal side, with olive gradually fusing into a brown gradient on the lateral side till the tip of its tail. A series of blotches that shape like the rhombus run down the length of the vertebral column. Each of these blotches is further connected by thin black lines to two other series of vertical black bars found on both its sides. The lower part (belly) is either olive, yellow, or yellowish brown that has dark crescents along the ventral scale margins. An orange coloration is also often seen on their bellies. Their head is dark olive on the top with most of the supralabial scales being yellow with black outlines.

Eyes: Their eyes are round and black like most other species of the colubrids.

Teeth: These are non-poisonous snakes, and hence, and do not excrete poison while giving bites, like the way their venomous counterparts use their fangs. However, they have long teeth, which can make the lacerations bleed profusely.

Sexual Dimorphism: The females are usually a little larger and heavier than their male counterparts. They also grow relatively faster than males. 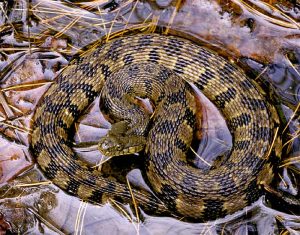 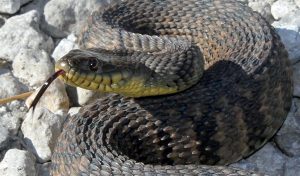 Unlike the diamondbacks, the mouth of the cottonmouths is white.

No other species of snakes in the US have the multiple papillae (tubercles) on the under surface of the chin, like the male diamondback water snakes have.

Hundreds of diamondback water snakes are killed every year, being mistaken as the viper cottonmouths. Watch the below video carefully to learn the differences:

There is very little evidence about how long can these snakes live. However, the specimens that are held under captivity have been observed to be living for up to 10 years.

The Diamondback Water Snakes are spread across the US, especially in the central United States. It is mostly common along the Mississippi River valley with its range including both the eastern and the western planes, as also in Tennessee, Mississippi, Oklahoma, Texas, Arkansas, Missouri, Kansas, Iowa, Louisiana, Alabama, Georgia, Illinois, and Indiana. They are also found in northern Mexican states of Nuevo León, Veracruz, Coahuila, and Tamaulipas. 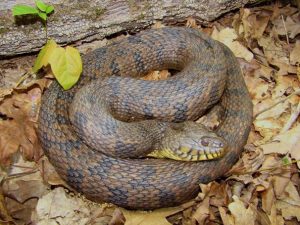 The diamondbacks are generally found in shallow water, near slow-moving water bodies, rivers, swamps, estuaries, ditches and even in water tanks. These snakes are also common near beaver and muskrat dens where the floras can provide them with plenty of covers, which they prefer.

Three distinct subspecies of the Nerodia rhombifer, including the originally described population, have been recognized:

These snakes are solitary creatures and would spend the maximum part of the lifetime alone except during the seasons of mating and hibernation. During mating, they would find a mate, whereas during hibernation, they would share their nests with other snakes. They can travel up to a mile or even more to reach their hibernacula.

The diamondbacks are mostly diurnal. However, during the summers, they might get active during nighttime. They are frequently seen to be basking upon branches of trees, tree roots, shrubs, and along the waterway banks. They mostly prefer hunting in the waters if they are hunting at night.

As they forage for food, they will often hang upside down from branches over water, seeking for prey, dipping their heads under the water surface. In such cases, if they are intimidated, or approached, they would readily drop into the water and swim away quickly.

When these serpents are cornered, they would often hiss like venomous snakes. They would fight fiercely to defend themselves, but are otherwise shy and harmless. They are not the type of snake that would actively seek confrontation with humans or other animals. They would only choose to bite if they are handled or are harassed physically. Once they attack, they would bite the victim repeatedly. The bites of these snakes are known to be quite painful, often resulting in mild to heavy bleeding, and might even require immediate medical attention. Particularly, it is this aggressively defensive behavior that has frequently been misinterpreted leading to mistaking them for the venomous cottonmouth, and has earned them a bad reputation.

They look for their prey patrolling the waters next to the shores. They would often swim through schools of small fishes with mouths wide open, swallowing anything coming their way. The snake is mostly active between the months of April and October, and like most other snakes, they hibernate underground during the winter months.

The Northern Water Snake will eat almost any animal that it can find, and is often considered to be a beneficial species because of its preference for eating pest species such as mice, frogs, etc. In the western parts of the US, where the large bullfrogs have become an invasive species, and are waging war against native frog breeds, the diamondback water snakes are playing their role by reducing the number of bullfrogs in those areas. 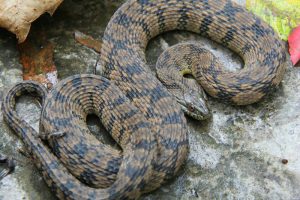 The breeding season of the diamondback watersnake is during the springtime, while they give birth during the late summer months, or early fall. After emerging out from winter’s hibernation, the act of copulation usually takes place right away. The diamondbacks are ovoviviparous, a characteristic common to the North American ‘Nerodia’ species. Though the range of this species overlaps with a few more water snake species, yet, no interbreeding has been reported by experts.

Multiple male snakes may court one female at the same time. Before the act of sexual intercourse, the snakes select places like banks or even in the water. However, they would usually select basking perches like branches of trees or shrubs where they would usually mate, hanging over the water surface.

During sexual encounter, the pair often makes ruffling and rolling movements with their bodies. Both the snakes might remain locked up for long periods of time, sometimes for even an hour or more. The gestation period of the female diamondbacks can vary between three and five months.

On an average, the female gives birth to around 47 live young, but might have up to 62 offspring at a time. The newborn juvenile snakes are around 8–10 in (20–25 cm) in length. The babies are a lighter and brighter version of the adults and are the same pugnacious like them.

The diamondback water snakes do not possess any parental instincts. As the young ones are born, they will instantly be deserted to fend for themselves. For the initial two years, the juveniles will keep growing quite quickly, growing almost as double their size. It has also been studied that, there is a shift in the prey choice of these serpents when they attain a length of about 1.5 feet. During this time, they prefer hunting frogs and other larger animals over smaller fish.

The diamondback water snakes have a very nominal market value in the pet trade. Even when these snakes are kept captive, they can still bite the handler. However, with proper handling, they will become quite docile.

If kept as a pet, this should also be kept in mind that, because the feces from fish and frog eaters can be very runny, and often have a very potent smell, it might be a very odorous experience to live with one of these specimens. 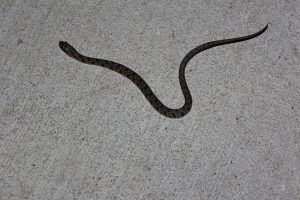 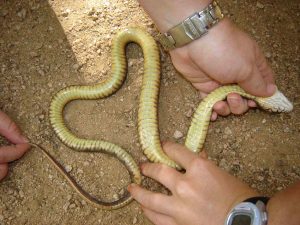 They live mainly upon small to medium size fishes, dead or alive, like minnows, etc., as also, amphibians like frogs and toads. They also feast upon young snakes, worms, leeches, insects, crayfish, and small mammals like rodents, etc. Young turtles too are occasionally consumed.

Despite the fact that, the Diamondback Water Snake is one of the largest snake species in the United States, they are not apex predators, and are often hunted down by other animals. Some of their common predators include snapping turtles, opossums, raccoons, foxes, and other species of snakes. With the first sign of threat, the snake will usually escape into the water. Also, the defenseless baby diamondbacks are frequently gobbled by animals ranging from large variety of fishes and frogs to other snakes, mammals and birds of prey.

The diamondback water snake is not a threatened species. The NatureServe conservation status has categorized them under the ‘G5’ or ‘Secure’ species list. 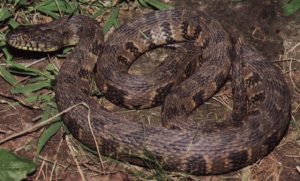