The Cedar Waxwing is a sleek, multi-colored, crested, sociable, medium-size bird that is often seen perching in flocks on hedges and trees. Sight of one single waxwing is rare. They are one of the two North American waxwings that dwell in most parts of North America at one point of time or the other, round the year. These birds are often confused with their relatives, the Bohemian Waxwings, with the latter being grayer and larger, without the typical yellow tinge present in the former. This colorful and gentle bird, belonging to the waxwing family of the passerines, is not much known among the general public. 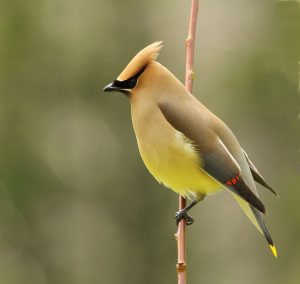 Weight: They are not much heavy and weighs around 30 grams (1.1 oz)

Fur/Feathers, Wings and Tail: These birds are cinnamon-colored, having grayish wings. Their tails are also gray but with a darker shade. The tip of the tail (tail band) is bright yellow. Their head crest is grayish cinnamon with a black throat. Their masks are black bordered in white. The belly of this bird has a light flavescent tinge, with white under-tail coverts.

Bills/Beaks: Their beaks are black with the lower bill having a white marking to the inner upper side.

Feet: Their feet are thin and black ending in fingers having a strong grip.

Eyes: Their eyes are black and small like most other birds of its size. A black pointed face mask runs from its one eye to the other, touching its upper bill.

Sexual Dimorphism (female vs male): There is practically not much difference between the genders. Tip of the tail of the adult male is usually broad in contrast to the narrow tail in females. Also, the males are darker then the females.

The cedar waxwing life expectancy can be up to a maximum of 8 years in the wild. 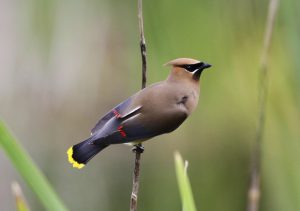 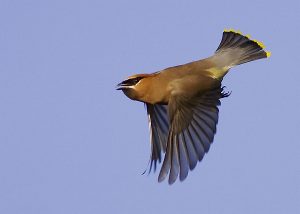 These birds are commonly found to be distributed mostly throughout the northern half of the USA. Their migration type can be both short and long-distanced. When they are not breeding, they are found spread across the Midwest and southern states up to Mexico, Central America, the Caribbean, and the northwestern parts of Columbia during winter. While breeding, these birds spread from the British Columbia, across Canada to Maine during the summer months. 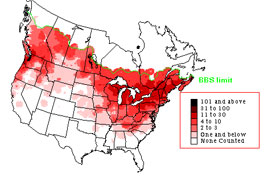 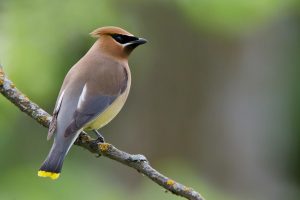 Habitat: Where do Cedar Waxwings live

These birds occupy a variety of habitats. They are found in the open evergreen and the deciduous woodlands, forest edges, backyards, stream sides, suburban parks, overgrown fields, fruiting trees, orchards, edges of swamps, manmade nesting boxes, suburban yards. They are also found in towns wherever they can find food, especially where berries are abundant. 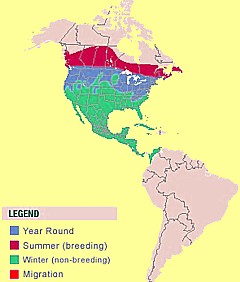 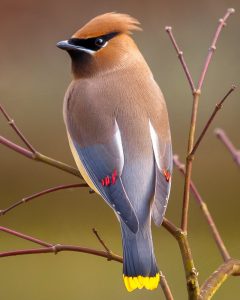 Researchers have found two subspecies, though the differences are not two strong:

The cedar waxwing is extremely gregarious and would live in large flocks of 40 or more birds all year round. They would move around from place to place depending upon the availability of berries and emerging aquatic insects for them to consume. The birds would often groom each other while spending time with their flocks. They would seldom venture near to the ground, and would frequently preen higher up onto the branches of trees. Also, these birds can easily be attracted by humans by offering them foods like chopped fruits in outdoor bird feeders.

These birds are not territorial though but might show aggression in behavior whenever they would come across their enemies or any kind of threat close to their nests. Their flight pattern is direct and short with steady wing beats. They would also move in long, zigzag flights over water or in mid-air, especially when they are out to catch an insect for feeding.

When they consume fruits, these birds would pluck one at a time, swallowing the entire fruit at one go. They are nomads and do not stay in one place for long, except during mating seasons. They would communicate with each other by using physical displays and emitting calls signifying different messages like well-being, fear, hunger, and so on. These birds would often raise their crest to signal an upset mind, or open their mouths flouncing feathers when threatened. This same behavior is repeated by the females to show that they are not interested in a male’s courtship. 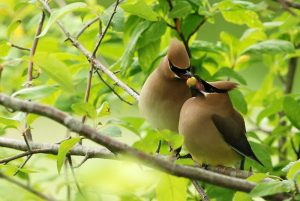 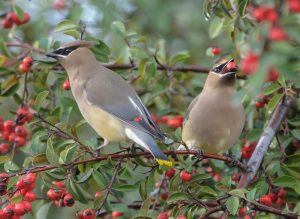 The cedar waxwings are frequent callers, and emit noises even during flight. These are not song birds though, but have two common calls. One call is a buzzing trill, while the other is a whistle with a very high-pitch. The former sounds like a ‘sree’ or ‘see’, and is a very short one, lasting usually for about half a second.

Diet: What Do Cedar Waxwings Eat

Though they have diverse eating habits, these birds are mostly frugivorous, feeding mostly upon fruits. They would consume fruits and berries especially during the winter season, whereas during the summer time, they feast upon insects like ants, beetles, caterpillars, which are much available during that time. Among the fruits that these birds consume, cedar berries are the most favorite. Other berries like juniper, dogwood, and wild cherries are also consumed. They would also eat flowers and drink oozing sap from different other trees. 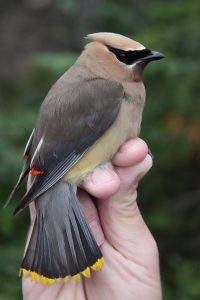 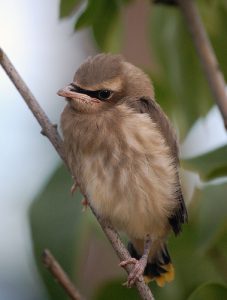 The birds are normally monogamous. While courting, the male and the female often perch together while touching each other’s bills, posturing, or passing foods to and fro. Soon after mating, both the birds would get involved working on building the nest. 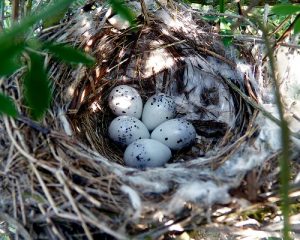 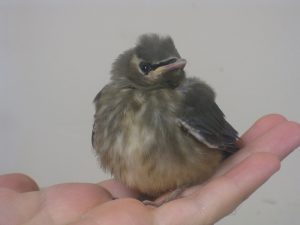 The nests are built almost 6 to 20 feet, or sometimes even 50 feet, above ground level atop trees or on horizontal limbs or forks. The nests are usually built using plant fibers, lined with finer materials such as moss, rootlets, fine grass, hair, as also by twigs, weeds, grass, etc.

Caring and raising the juvenile is the responsibility of both the sexes. About 4 to 5 eggs are laid at a time. As the eggs are laid, the female would incubate it for around 12 days, and broods the young nestlings for about 3 days. During this time, the male bird would gather food to the nest. Later, however, both the father and the mother get involved in feeding the hatchlings.

The baby fledglings grow feathers in about 15 days. Though the chicks won’t go far from their nests, and are fed by their parents for a week to 10 more days. As they grow a little bit, they are free to join a flock of other immature birds. Both the male and the female birds attain maturity at around 1 year of age. 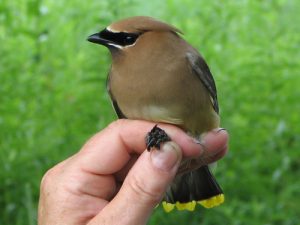 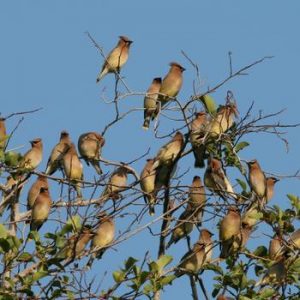 Predators: What eats a Cedar Waxwing

Merlin (a kind of falcon), sharp-shinned hawk, the Cooper’s hawk, common grackles and different larger birds of prey feast upon these birds, mostly the adult ones. The babies and the eggs are vulnerable to other birds like the blue jays and the house wrens. Cats also pose a threat when they visit the urban areas.

The Cedar Waxwing bird is not a threatened species. The IUCN 3.1 has categorized them under the ‘LC’ (Least Concern) species list. 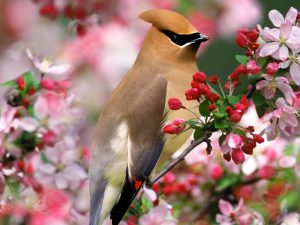 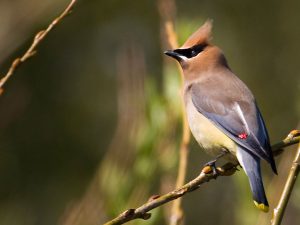 One response to “Cedar Waxwing”