One of the largest birds in the stork family is the white stork which is characterized by a white plumage and black wings. The European White Stork is a member of the Stork family, Ciciniidae and shares a close relationship and resemblance with Maguari Stork of South America and the Oriental White Stork of East Asia. It is a long-distance migrant bird which has breeding grounds on different continents. It is conspicuous by nature of breeding but shares a close proximity to humans.

For this reason, the bird has left a deep imprint on human minds which are quite reflected in forms of expression such as paintings and literature. In fact, they were considered to possess filial virtues which were supposed to inspire children to cultivate such virtues.

It is also believed to bring in good luck and fertility to the home over which it built its nest.

The white stork bird is a large one measuring around 100 to 120 cm from the tip of its beak to its tail and has a wingspan of 190 to 220 cm. It is a light bird weighing only around 2 to 4.5kgs. Males can be distinguished from their female counterparts on the basis of their larger size. These storks are long-necked creatures with long hind legs and a straight and pointed beak. Both the legs and the beak are red in color. It has a white plumage with feathers black and shiny. A tinge of purple and green provides glossiness to the feathers of the beautiful bird. It has long and shaggy feathers on its breast which form a fluffy ruff that gets erected during displays of courtships. They possess grey or dull brown eyes which are surrounded by a patch of bare black skin. 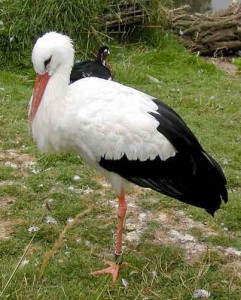 The newborn ones or the juvenile birds are dull by nature of their color but do become colorful as soon as they acquire maturity with age.

Although it is considered to be a peace-loving bird, yet its broad and long wings help it to soar high, producing a lot of sounds while flapping and beating its wings. White storks always fly with their necks stretched, and legs extended beyond their tail. It walks at a steady pace with its neck upstretched but is seen hunching its head between its shoulders while being at rest. It may molt during its breeding season.

White storks have a breeding range in various regions in central and southern Europe, west-central Asia, and parts of the Middle East. It migrates to Southern Africa and parts of the subcontinent during the winter months.

The White storks prefer to feed in areas of shallow wetlands and farmlands, grassy meadows and avoids areas having tall grasses and shrubs. This is contrary to their breeding preferences as they like to breed in wet grasslands. They tend to feed and breed in meadows, lakes, and pastures which are scattered by trees all over for the purpose of nesting and roosting. They have also adapted themselves since time immemorial to live in close proximity to humans by building nests on rooftops and other places dominated by human activities.

Being a long-distant bird, the white stork winters in Europe migrate to Africa to even as far as the Indian subcontinent while flying southwards from their breeding grounds in Europe. This happens in the month of August and September. They migrate in huge numbers during this season of the year. While migrating from Europe to Africa, they avoid flying over the Mediterranean Sea since air thermals are not built on it, on which they rely for gaining energy. Accordingly, they detour via the Strait of Gibraltar on the western front. They migrate to the east via the Levant and the Nile. This eastern route is actually the most favored one for the storks as is evident from the number of white storks who follow this eastern path. To go by the recorded statistics, more than 500,000 storks take this path annually. 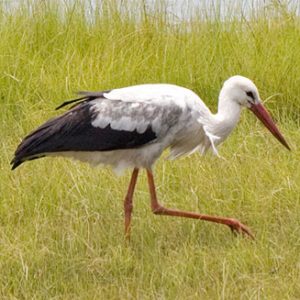 A group also migrates westwards to Sudan, Chad, and Nigeria. After a long journey of almost 50 days, the European white stork completes its sojourn and finds peace in their original habitat. However, such a process of migration may be affected by khamsins, which are strong gusty winds that make the weather unsuitable for flying. Such adverse conditions delay the duration of migration.

The diet of white storks depends on the season of breeding and migration, the place of migration, and the availability of prey. White storks hunt for preys in meadows, areas of low vegetation, and shallow water. They usually feed on insects such as grasshoppers, beetles, crickets and locusts; reptiles, earthworms, amphibians especially frogs; mammals such as moles, shrews, voles. They also eat bird eggs and their young ones, fishes, crustaceans, mollusks, and scorpions, etc. Their nature of eating a prey is to swallow it if it is a small one, and killing and tearing apart the prey if it is a larger one. In a nutshell, they may be categorized as carnivorous.

The white stork bird breeds in open farmlands, marshy wetlands, and builds nests in trees, and on rooftops. As a matter of fact, they form loose informal colonies during the time of breeding. They usually form a monogamous pair for breeding and the same ones may pair successively every year.

Male white storks are the first ones to arrive at the nesting site for breeding. The male uses the Head-Shaking Crouch display method as a way of attracting the female. Once the female gets attracted, she displays her approval in her own way. A courtship within a short span of time indicates greater affinity.

The nests made by them are usually huge in size, constructed of sticks and branches, grasses, twigs, rags, and other materials. The nests are usually 1m in diameter but may grow up to 2 to 3m depending on the nature and amount of the material used.

The female white stork lays only three to four eggs which may also be as many as seven in exceptional cases. Both the parents share the duty of nurturing the stork babies during the incubation period. The young chicks have black bills and white body. This nurturance may continue till the chicks learn to fledge which happens within eight to nine weeks since birth. By the time the babies grow two to three years of age, they are capable of breeding. The maximum number of years a stork can survive is for thirty-five years.

There has been a substantial decrease in the population of white storks since the last century. This has concurred both due to natural and anthropogenic factors. The natural factors include parasites causing diseases such as mesostigmatic mites such as Trichouropoda orbicularis, Macrocheles merdarius, Petrolichus ciconiae, and others such as West Nile virus (WNV). A disease caused due to this virus is highly contagious. And the man made factors include pollution, deforestation causing loss of habitat, electrocution, drainage of wetlands, and loss of agricultural lands for the setting up of industries, use of persistant pesticides and illegal hunting.

Being rated as Least Concern by International Union for Conservation of Animals and natural Resources (IUCN), several measures have been undertaken for the conservation and preservation of this beautiful flying creature such as zoo rearing, nest building and other methods aimed at boosting its existence and breeding.

Such measures if undertaken sincerely shall prove highly beneficial for the preservation and conservation of all those creatures that stand on the threshold of existence and extinction. The White Stork is one of the most beautiful birds on the planet and our efforts shall ensure their survival in future and prevent them from getting extinct.

A glimpse at some of the pictures of white stork shall prove how beautiful, serene, gorgeous, and amazing creatures they are, who have provoked various modes of expression used by humans to highlight natural beauty. They are among the living marvels created by mother earth. 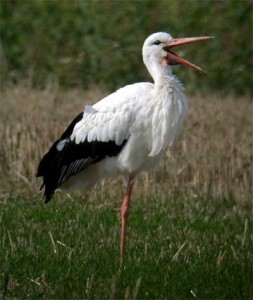 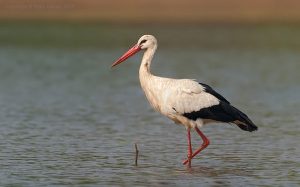