The Western Pond Turtle is a medium-sized turtle found mainly in the western coast of USA and Mexico. It is also commonly known as the Pacific Pond Turtle. In the year 2002, this species was declared to be extinct in Canada.

The Western Pond Turtles are dull olive or dark brown in color. Their shell is almost 4.5 to 8.25 inches in length. The dorsal carapace is broad and low and may or may not have streaks or reticulations. It has a brown or black coloration. Sometimes some fine lines or marbles can be found on the carapace. In adults, the shell is smooth without any keel or serrations. The lower shell or the plastron is yellowish with dark blotches. The head and legs of the turtle are dark colored with yellowish markings. The general coloration of the skin is grey; the body is covered with large, noticeable scales or scutes. An adult turtle weighs almost 450-1100 grams. 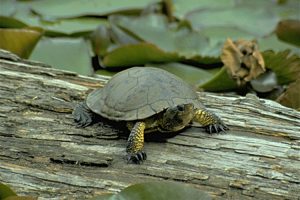 These turtles are diurnal for the major part of the year. However during the hot summer months, they can choose to avoid the day and move about at night. Normally these turtles like to sit on sandy areas, rocks or logs and bask in the sun the whole day getting their body temperatures up. They are also often found basking in shallow waters. They may show aggressiveness and territorial behavior while basking. They are very shy and timid and will jump on water or hide themselves behind plants or rocks if they hear a sudden noise or sense any predators or humans nearby. They can also withdraw their limbs and heads behind their shell and sit motionless. They spend much time foraging; while searching for food they will use their sense of sight or smell.

During the summer months when the ponds or streams dry up, these turtles breathe mud for survival. They dig into the muddy ground draw in oxygen through their skin.

During winter, they hibernate at the bottom of their watery habitat or in woodland areas.

These turtles are omnivorous; they like to feed on plant material such as cattail roots, inflorescences, alder catkins, willow, yellow pond lily fronds, tule, lily pods and filamentous algae. They also feed on animals such as carrion, frogs, tadpoles, fishes as well as crayfish, snakes, insects and several aquatic invertebrates. These turtles swallow their food under water as having to swallow their food dry is seemingly difficult for them.

The Western Pond Turtle is found mostly in the western coasts of USA and Mexico; their range stretches along from western parts of the state of Washington to northern Baja California.

These turtles mostly prefer serene streams, ponds, marshes, muddy canals, calm lakes and pools as their natural habitat. Sometimes they may also wander in upland areas almost half a kilometer away from water. 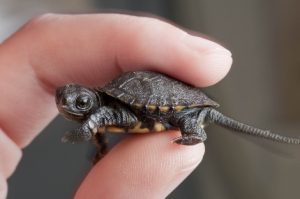 The common predators of the Western Pond Turtles include birds, coyotes, skunks, raccoons and American bullfrogs.

During drought and dry conditions, they reduce their activity and need for more oxygen. They can aestivate in the mud, i.e. they can soak in small traces of oxygen from the mud. This helps them to survive in a low oxygen environment.

In the wild, these turtles mate during springtime and also in the fall.

The Western Pond Turtles reach sexual maturity when they are around 10 to 15 years old. The females produce around 5 to 13 eggs per clutch. Larger turtles usually carry more eggs while smaller turtles carry only one or two. The turtles can move around half a mile to almost 90 meters away from water for laying the eggs. Females may leave the water and wander off in the evening in search of a nest. Nesting takes place from late May to the middle of July. An ideal nest should be south-facing and consist of dry soil and sparse vegetation. The turtle makes the soil soft by urinating in the soil and then dig out a hole in the mud with the hind feet. The female lays her eggs in the hole and then covers them with vegetation and humid soil to provide a moist environment. This procedure usually takes anywhere between two to four hours. Incubation of the eggs can last anywhere between 90 to 130 days. The eggs normally hatch during the fall months. The average size of a hatchling is only about 1 to 1.2 inches. 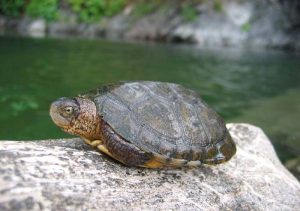 The average life span of these turtles is around 40 to 50 years, although some individual specimens have been known to live up to 70 years.

The population of the Western Pond Turtles is already threatened by several factors. Hence it is better not to take them as pets and allow them to grow on their own in the wild. Collecting them from the wild for petting them is strictly illegal in many states. In fact, if you ever find one moving out of water and is about to be harmed, you should gently lift the turtle up and take it back to its watery habitat. In case you ever find an injured or disturbed Western Pond Turtle, you should immediately contact the local Wildlife Care Facility and ensure safety of the turtle.

However in case you still want to go ahead and adopt these turtles as pets, here are some guidelines that will allow you to care for these delicate creatures.

Living Conditions: The tank should resemble the turtle’s watery habitat to make it feel at home. The tank should have the minimum capacity of holding at least 20 gallons of water. The area should comprise of a water body with well-positioned piles of rocks, aquatic vegetation and sand-covered grounds. Adequate scope should be provided for the turtle to bask in the sun or some artificial lighting. The basking temperature, if artificially regulated, should be maintained around 90°F to 95°F. The temperature should be measured by a digital probe thermometer.

Normally in the wild, the turtle’s body uses the ultraviolet radiation of the sun to produce Vitamin D3 from calcium. The benefits of sunlight can be provided by fluorescent UV bulbs. Also, the water should be kept warm using an aquarium heater.

The tank should be regularly cleaned and the water should be filtered regularly. You can choose between Hydrosponge, under-gravel, powerhead or other forms of filtering method of your choice. How frequently you should clean your tank will depend on the number of turtles you house together. Normally more than one turtle can be housed together in a tank as they do not tend to be aggressive towards each other.

Diet: Red worms, superworms and crickets should be combined with vitamin and calcium powder supplements to provide these turtles with the best balanced diet. Phoenix worms and silkworms are also a valuable source of nutrition for these turtles. A meaty diet should be alternated by fresh green vegetables. Dandelion greens, mustard greens, turnip greens and collard greens are important snacks. These turtles will also enjoy zucchini, escarole, cucumber, yellow squash, carrots and endives.

The Western Pond Turtle has been classified under the list of “Vulnerable” species by the IUCN.

Here are some interesting facts about these turtles:

Here are some images showing these turtles in their natural habitat. 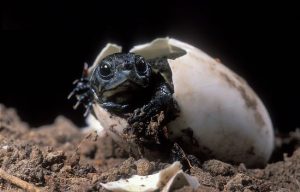 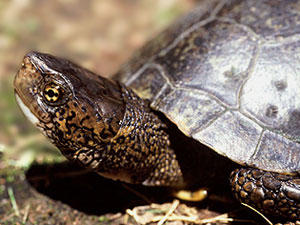 The Western Pond Turtle are an important part of the North American ecosystem. Over the years their numbers have been reduced greatly due to predation, fragmentation and habitat destruction. It is thus very important to provide adequate care and protection to the survivors of this species.