The Veiled Chameleon, also known as the Yemen Chameleon, Chamaeleo calyptratus, is a species of large reptile that dwells in the hilly areas of the Middle Eastern countries. They get their name from the crested protrusions above both their eyes, resembling veils. The chameleons are also kept as pets and are popular for their vivid coloration. 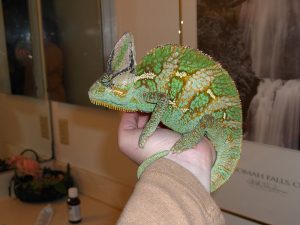 Size: Males are typically larger. From the tip of the mouth to the tip of the tail, the male veiled chameleon is between 17 to 24 inches in length. The females are much smaller in size, with a length reaching between 10 and 14 inches.

Color and Skin: The veiled chameleons are primarily green in color with a rough skin. But the male chameleon is brighter and more colorful with attractive pigmentations. They have stripes and spots of tan, orange, white, brown, blue, turquoise and sometimes yellow, upon a green base. But they keep changing their colors according to their moods and ‘emotional state’. Translucent and sunburst veiled chameleons are rare. Juveniles and females are often uniformly green with some random white spots. However, a breeding and pregnant female is very dark green with yellow and blue spots.

Eyes: These chameleons have bulged-out eyes, which they can swivel up to 180° in order to ‘keep an eye’ on any impending danger or predator more efficiently. Also, their eyes can move independently of one another, which means, these lizards can look in front of and behind itself at the same time. 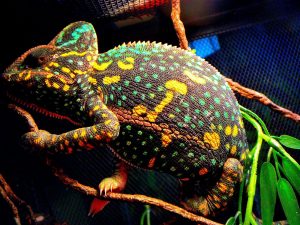 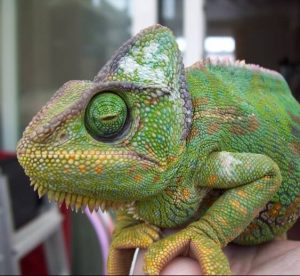 Feet: The veiled chameleon is an expert tree-dweller and climber. The strong, clawed feet of these creatures are naturally adapted to help them have a proper grip while holding a branch of a tree.

Tail: The long tail of the veiled chameleon helps them in movement, especially during climbing, and acts almost like their fifth foot. They can coil their tail and can even use them to grasp the branches of trees during climbing or moving.

Tongue: These lizards have a long tongue like most other breeds of chameleons, which they use to catch their prey like insects. 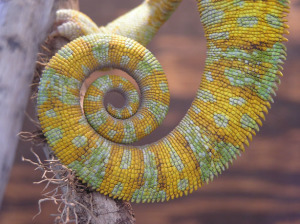 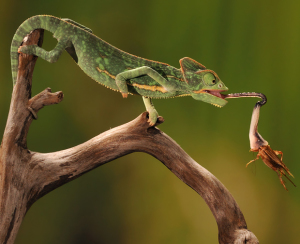 Casque: These specialized lizards are popular mostly for their two ‘headgear’ or crest-like ‘veils’ atop their eyes, known as the casque, which are found in both the males and the females. These are mainly used for collecting atmospheric moisture, since they live in very dry, arid regions. The casques are smaller in females.

These Middle Eastern chameleons are spread widely across the border between Saudi Arabia and Yemen. These lizards are mainly found in the dry plateaus and higher deserts and in high altitudes of the mountainous regions, inland river valleys to an elevation of up to 3000 feet.

Like most other chameleons, the veiled chameleons are arboreal. The natural habitat of these lizards includes trees, bushes and shrubs. 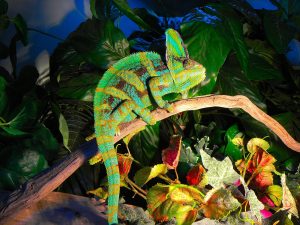 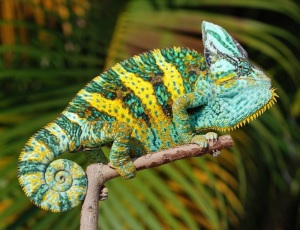 Being basically shy by nature, the veiled chameleons coil themselves in a tight fetal position, the moment they feel threatened, and darken their body color (especially tan). They take time to uncoil themselves and come back to their normal state again, until they feel safe. In general, veiled chameleons love solitary life. Males are very territorial and are very aggressive to each other. Hence, as pets, two males shouldn’t be kept together. Although, two females are comfortable with each other, as long as it is not the breeding season. The opposite sexes would only tolerate each other during mating.

What do veiled chameleons eat

Being omnivores, the adult veiled chameleons feast upon both plants and animals. Insects and worms top the diet chart of these lizards, which includes crickets, locusts, mantids, cockroaches, waxworms, silkworms, mealworms, grasshopper, lizards etc. They also consume fruits, blossoms or leaves from time to time, especially, during droughts or dry season. Veiled chameleons can’t recognize still and standing water. Hence, like all chameleons, this breed likes drinking drops of water on leaves.

Veiled chameleons do not make distinct or clear sounds or calls, although it has been reported that, they make almost inaudible grunting or purring sounds, which can be felt if touched. This is a sound which they produce especially when they feel threatened or intimidated. At times, they are also seen hissing to warn predators or even their new owners to stay away from them. 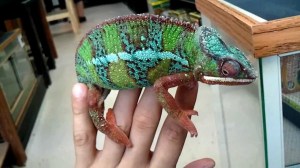 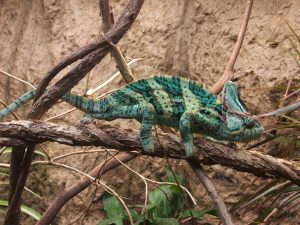 All carnivores in the area can be their predators. Common predators like birds of prey, snakes, lizards, and even other chameleons can prey upon the veiled chameleon in the geographical area they live.

Like other species of lizards and chameleons and many other reptiles, these creatures also shed their skin from time to time.

The veiled chameleon lives up to 5 years of age. Females have been recorded to be living for up to 8 years.

After birth, the baby veiled chameleon attains sexual maturity after 4 to 5 months. After a successful mating, the female often changes its color within 18 hours from the time of copulation, which might occur for up to 3 times a year. The gestation period of these creatures is 20 to 30 days, after which, the female lays her eggs, which are white in color and are oval in shape with a tough skin. The clutch size ranges between 35 and 85. Before the hatchlings are born, the eggs are kept hidden digging hole under warm sand for incubation. 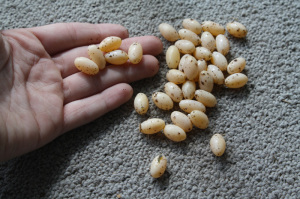 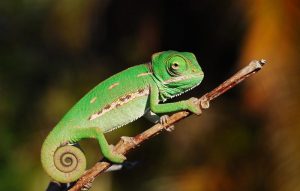 It is really tough to differentiate between a male and a female veiled chameleon until it attains the age of maturity. The easiest way to determine the sex of a veiled chameleon of any age is to check for a tiny ‘tarsal spur’ behind the hind leg. These spurs are present only in males. Also, the male chameleon possesses a larger casque than the female of the species, and has also a greater body-length than its female counterpart. As mentioned, the color patterns in males and females vary distinctively.

The veiled chameleons are extensively kept as pets around the world. However, some individuals of the species can become tamed easily, while others might take a really long time to be friends with its owner. Hence, these creatures are better to sit and watch inside their enclosure, rather than handling or touching them frequently. It is also important to make sure to keep the chameleon alone, and not with any other individual of its species, unless it is not for the purpose of mating.

Housing and Cage Setup: The cage meant for the pet veiled chameleon must be minimum 10-gallon in size, and there should be an enclosure for the juveniles. It should also consist of a screen enclosure for the adults, with a minimum size of 24 x 24 x 36 inches (61 x 61 x 91 cm). As cage, a glass aquarium can also be used for small juveniles and hatchlings. However, there should not be any substrate, but only simple plastic or glass should be used as cage flooring, at the bottom of the cage. 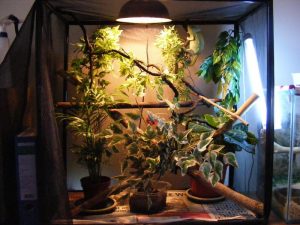 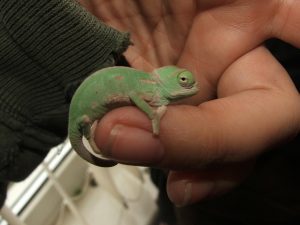 Decoration and set-up: The cage should be easy to clean with good ventilation. Small twigs and branches for climbing, as also real and/or artificial plants can be used inside the cage for the arboreal creature to take shelter.

Moisture: Veiled chameleons need supply of moisture from outside to keep their body hydrated. Hence, misting the cage is necessary to delivering water every day. This can also be done by using a drip system.

Heat and Light: Both sunlight and lighting is required for the veiled chameleon. A basking light can be used to provide heat to the creature for around 6-12 hours a day. Also, keeping the animal exposed to artificial UVB lighting, or else, to natural sunlight, for around 10-12 hours a day is necessary.

Food and Drink: The veiled chameleon would live on the same diet as pet, as it would do in the wild. Commercially-raised insects like live mealworms, superworms (Zophobas), roaches, crickets, silkworms, waxworms, and other live insects would be their favorite foods. Insects collected from the wild are also beneficial as long as they are collected from an area free from pesticides. Occasionally, pinkie mice, snails and small lizards can also be given to them as food. For a vegetable-diet, a shallow bowl with assorted chopped fruits, vegetables and mixed greens can be tried. At times, the lizards would also relish ficus and hibiscus plants. As for their daily need for water, the veiled chameleon would never drink water from a bowl. So it is not necessary to give them water separately. Instead, their cage should be misted at least twice daily to meet with their drinking needs, as mentioned.

The veiled chameleon has been listed by the IUCN 3.1 as “Least Concern” due to its increasingly high population. 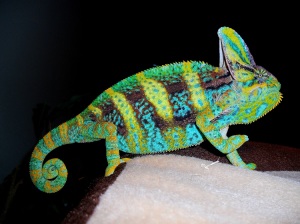 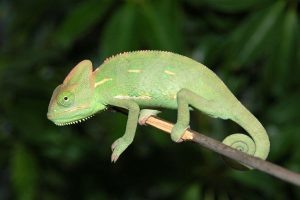 One response to “Veiled Chameleon”