Jackson Chameleon is a species of chameleons that particularly belong to East Africa and was initially described in 1896 by Belgian-British zoologist George Albert Boulenger. Later, this species was introduced to other parts of the world including Florida and Hawaii, where they turned out to be an invasive species. These insectivores are not just found in the wild, but are also widely regarded as pets in many countries.

In general, these reptiles have an appearance of a miniature dinosaur, with somewhat a toad-like face, and a horned rhino-like head. They have uneven thorn-like projections on their backs, starting from their necks down to their tails, which have gradually disappeared near to the tip of their tails.

Size: They are small to medium-sized, males measuring about 8 to 10 inches and females around 7 to 8 inches in length.

Weight: There is no specific weight, with adult chameleons can grow up to anything between 90 and 150 grams.

Skin Colors: They have a rough, rugged skin, which is generally bright green, although some specimens can have hues of yellow and blue. Like all chameleons, they can change their body colors readily depending on temperature, mood, and health.

Feet: Each foot is fingered like most other chameleons helping them in crawling up the trees. 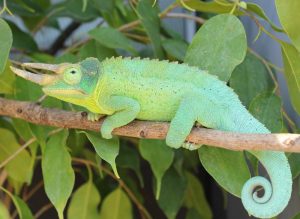 Eyes: Eyes are bulged-out and can swivel up to 180°. Eyes can also move independently of one another. 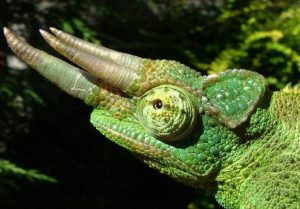 Head: The width of its head is almost the same as its neck. Because of their horns, their head has got the look of that of a rhino’s.

Tail: Tails are thick that gradually narrows at the tip. They can coil their tails as and when needed.

Horns/Headgears/Crest: These creatures are known for their three brown horns or ornamental headgears, though present only in the males. However, females can also have traces of the central horn in rare cases. This is a very outstanding sexual dimorphism by which the two sexes can easily be differentiated. 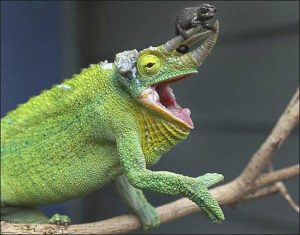 Tongue: The tongue has fleshy tip covered with sticky saliva. 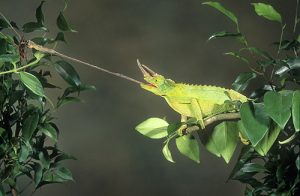 The average longevity of these creatures is 8.2 years. In captivity, the males can live anywhere between 5 and 10 years, while the females usually live for 3-5 years.

The geographic range of these chameleons is the East of Africa, which covers areas of Kenya and Tanzania. However, they are primarily native to Ethiopia.

Habitat: Where do Jackson’s Chameleons live

Terrestrial biomes or the natural habitat of the Jackson chameleon is the rainforest. These animals prefer living in forests and thickets in the mountainous regions, where there are ample of covers to hide in. They are primarily tree dwellers and would seldom come down to the grounds except when it comes to mating or laying eggs.

At present, three subspecies of Jackson’s chameleons have been recognized: 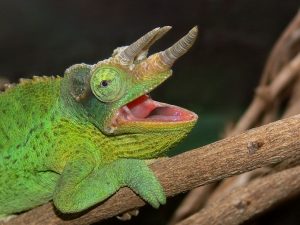 The chameleons lead a solitary, lethargic life except during mating. It is a matter of distress for them to view each other, especially for the males. The males wouldn’t stand the very sight of another male and even a female. The females also feel much strained with the view of a male.

The males of these lizards are territorial and would militantly fight with their competitors using their horns. On the contrary, these horns are also used as a display when attracting females. As two males come close to each other, both of them would turn sideways while flattening the body and curling their tails, thrusting the head forward displaying their vibrant colors. To scare the opponent, they would open their mouths wide to display the different colors inside. A belligerent male would sway itself from side to side and bobbing up and down repeatedly emitting soft hisses. The other male that is submissive would soon give up and try to hide, or will freeze in place, and later, escape, eventually leaving the territory. Sometimes, the chameleons often fade themselves into drab colors when they are in danger, or there are chances of predation.

It is interesting to know that, these chameleons are less territorial than most species of chameleons. During physical combats, two males frequently poke each other with the horns, trying to push each other off the trees. If they fall out from the branch, it can easily lead to physical damages in many cases. 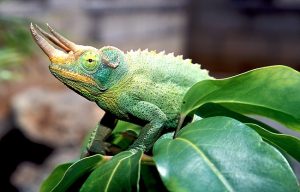 These reptiles follow a mating ritual that is very similar to their threat ritual. Initially, the male chameleon will display threat gestures to the female chameleon including inflating the throat, gaping, lifting the forelegs up towards the opponent, and changing their body colors.

When proposed for mating, the female chameleon will have two options. She would either reply with threatening gestures to hint at her unwillingness to mate, or else, will initiate weak threatening gesture (or no gesture at all) to indicate the reverse. Soon, the male will come to know the meaning of her gestures, and act accordingly. 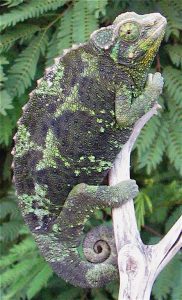 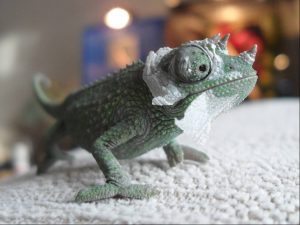 In case the female is willing, the male will then circle around the female, and finally grab the female’s neck in its mouth while pulling itself on the back of the female and inserting its hemipenis into the female’s cloacal opening. This entire act of mating generally lasts for about 13 minutes.

The female chameleon will continue with her mating for the next 11 days. However, it will not with the same male more than one in a day. The gestation period of the female lasts for about 190 days. 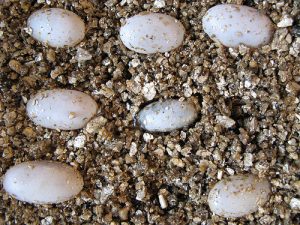 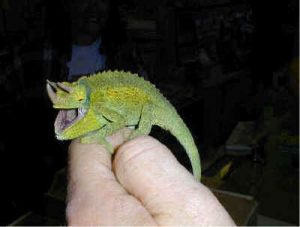 The Jackson chameleons are ovoviviparous, that is, they give live birth. The babies are born directly after being incubated in a tender shell membrane right inside the womb of the female. At a time, anything between 8 and 30 babies are born, rather than being hatched out from eggs. The females copulate again after around 3 weeks.

They are usually born in the morning, as the female would evert her cloaca, delivering the babies one by one on the branch of a tree. When born, they are still covered by a gelatinous egg sac. They would continue to sleep until the egg would touch the substrate, after which they would stretch and break the egg sacs and come out.

As the babies are born, the female doesn’t feed them. The juvenile chameleons start hunting small insects the moment they are able to do so without the slightest help from the mother or the father. During the time of birth, the baby chameleons are about 5.5 cm long, weighing 0.6 gm approximately. The babies attain the age of sexual maturity and reproduction after 9 or 10 months. 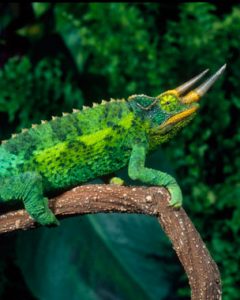 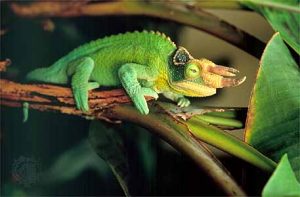 The Jackson Chameleons, like other chameleon species, are at the bottom of the food chain and are predated by varied types of animals, including birds of prey, large snakes and rats, and other mammals like raccoons, cats, and even different species of monkeys.

If you want to buy a Jackson’s chameleon as a pet, they are readily available in pet stores. However, captive bred chameleons are always recommended over wild caught animals. Chameleons need lots of care daily. Care must also be taken that your chameleons are not left vulnerable to other pets in your family, or to the children. Proper care must be employed for raising, holding, feeding, handling, and building a cage or an aquarium for them. Here are a few good tips you should consider before you decide living together with one yourself:

Installing, maintaining and cleaning the cage: These animals need high humidity without which, they might easily get dehydrated. For that, you can install a dripping system inside the tank or the enclosure of your Jackson chameleon. They also need colder temperatures during night time. So make sure you do not make the setup in such a place where it might be exposed to direct sunlight all day. Screened cages serve best so as to avoid direct rays of the sun.

The recommended dimension is minimum 3 foot tall by 2 foot square per chameleon. However, it is not recommended to house two male or two genders together, since the males might end up fighting constantly, while the females would always be in distress with the very sight of a male and might even give up eating. Housing reptiles in different cages is a good way to reduce the stress of captivity, except during mating.

Decorate the interior with live, nontoxic plants like Ficus benjamina that are suitable for them. Also, place sticks of various sizes for them to climb. Remove the poops, dead leaves and insects as and when needed. When you opt to give a thorough cleaning, remove your pet and all the plants before you begin with you cleaning work. 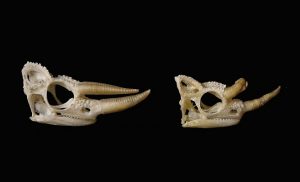 Temperature and Lighting: The recommended daytime temperature should preferably be 80° F, while the nighttime temperature should be 60°. On top of the indoor enclosure, you can install a UVB full spectrum tube and a spot lamp for the purpose of heating. Because, basking is also a necessary part of their lifestyle, allow them at least a few hours to be exposed to sunlight minimum one day every week.

Diet/Feeding and Drinking: Supply them with high quality nutrition-loaded, high-quality insects like cockroaches, house flies, crickets, small snails, wax worms, butter worms, etc.           5-7 insects per feeding are enough for your chameleon. It is a good idea to offer water before you feed them. This would ensure that the tongue is lubricated and functioning properly. Keep a source of enough water (like in a dish) for it to drink, as also to keep the aquarium hydrated, which, in turn, would keep both their skin and delicate lungs hydrated. You should also spray water gently in the plants and all over the aquarium, minimum twice a day.

Diseases: Excessive synthetic Vitamin A might them prone to gout and edema. Excessive humidity or too much heat, or, can give them upper respiratory infections, eye infections, and some complications. Contact your vet immediately, in case you notice they are showing signs of sickness, or display any abnormal behavior or attitude you are not accustomed to. 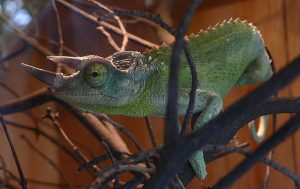 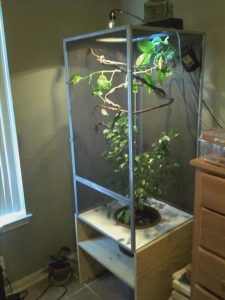 The Jackson’s Chameleon is not a threatened species. The IUCN 3.1 has categorized them under the ‘LC’ (Least Concern) species list.

One response to “Jackson’s Chameleon”