The timber rattlesnake maybe a venomous snake but many are still unaware of the fact that it is not the attacking type. This snake comes under the species of venomous pitviper, common to eastern United Sates.

These snakes do not attack humans, but if provoked they will not hesitate to put up a fierce battle. Timber rattlesnakes do not have any sub-species.

This snake is also known as canebrake rattlesnake.

Length: Timber rattlesnakes are rightly regarded to be one of the largest snakes in the United States. This venomous snake is approximately 91 – 137 cm (3 – 4.5 feet) in length.

Weight: These snakes tend to be pretty fat especially when food is abundant.

Color: This snake generally has two kinds of colorations. The first is what is known as the light shade wherein it acquires a light yellow or gray background color. Attractive V-shaped dark brown and black cross bands are noted to highlight the background.

The second kind known as the dark stage comprises of yellow background that is further highlighted with thick brown or black cross bands. 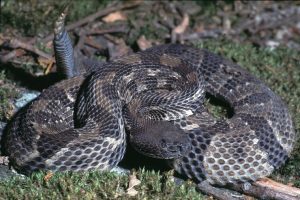 Head: Its broad, flat head is roughly triangular in shape.

Eyes: Characteristic to all venomous snakes the eye pupil the timber rattlesnake is also vertically slit.

Tail: It is noteworthy that the tail of the timber rattlesnake is always black irrespective of the coloration.

Skin: This snake has scaly skin that appears ridged. An onlooker will find it to be rough-skinned at the first glance.

Special Sensory organ: Timber rattlesnake has a temperature sensitive pit or opening on each side of its face. This sensory organ is placed between its eye and the nostril.

Timber Rattlesnakes love to feed on small mammals like chipmunks, rabbits, gray squirrels, mice, weasels and moles. In fact such mammals comprise over 90% of their usual diet. However the remaining 10% of their diet consists of reptiles (other kinds of snakes), birds (baby turkeys, baby ducks, small song birds etc) and amphibians (toads and frogs). The garter snake is one such snake type that the timber rattler preys upon.

Timber rattlesnakes are generally observed, inhabiting rugged terrains of deciduous forests. Both the males and females prefer to bask in cool, dense woodlands during the hot and humid temperatures.

However it is noted that pregnant females like to bask in the open, rocky ridges where temperatures at the maximum. In fact, this phenomenon of gravid females basking in the hot sun before giving birth is referred to as ‘basking knolls’.

Timber rattlesnakes hibernate during the winter months in limestone crevices and dens.

These snakes are mostly found in eastern regions of United States right from South Minnesota and south New Hampshire, south of east Texas and North Florida. Timber rattlesnakes are also to be found in South Ontario, Canada.

The male snakes become sexually mature by the age of four; while females reach their sexual maturity, only by the age of 7 or 11.

The peak mating season of the timber rattlesnakes occur generally between the months of July and August. Males get involved in wrestling matches in order to win their receptive females. The female snake can detain fertilization of their ova for almost nine months or June of the following year. They are endowed with the capacity to store sperm for a long period involving many months.

Female timber rattlesnakes can reproduce once in a period of 3 to 4 years. The females give birth to 6 to 14 young ones. These baby snakes are cased in thin and transparent membranes, at the time of their birth. They are approximately 8 – 10 inches in length and even as newborns they have fangs and venom glands that work perfectly fine. 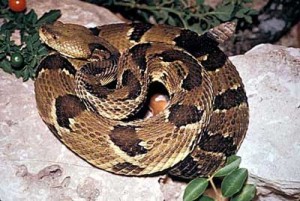 In the latter stages of the gestation period, the female refrains from eating or feeding; more so she has to remain active so as to meet the physiological needs of the baby growing inside her. As such the female has to take control and regulate her body temperature, during this precise period.

It is mostly during this period of pregnancy of the female snakes, when they fall victims to human predating. It is easier for the humans to capture these female snakes while they are in their den. Human predating has greatly affected the population and continuance of this species.

Timber rattlesnakes are nocturnal beings. Creepy as it sounds, these creatures are most active in the darkest of nights especially the ones associated with a new moon.

These snakes are able to determine the size of the prey by using its sensory pits. In fact they can literally know the direction taken by the passing animals by sensing the vibrations. Timber rattlesnakes are veteran ambush predators that wait hiding, coiled behind rocks and logs to pounce on the prey; completely taking them by surprise.

If these snakes happen to sense a prey of a bigger structure and size than themselves, the timber rattlesnake is well prepared to lunge at it. The snake thereafter digs its sharp fangs and injects the deadly venom in to the prey. This act of the timber rattlesnake is aimed to immobilize the prey. Once the poison begins to take effect, the snake withdraws; however it traces the victim by their scent and wholly swallows the dead victim.

What follows after the intake of the food, is its routine retreat to a warm basking site. The timber rattlesnake raises its body temperature to a maximum of 80 to 85 degrees Fahrenheit in order to facilitate efficient digestion of its early meal. As a matter of fact the venom is one such body secretion that aids the process of digestion to a great extent.

In the wild, timber rattlesnakes have a life span of approximately 20 years.

Some of the predators of these snakes include foxes, coyotes, opossums, hawks, eagles, owls, turkey, king snakes and raccoons. Humans are a chief predator for these animals.

In the scenario of a bite by this snake, the victim should try to remain calm and seek immediate medical attention. It is important to remember that an increase in the heart rate that normally occurs if a person panics will only accelerate the spread of venom in the body.

It is also recommended to try and avoid traditional snake bite treatments like tourniquet or the procedure of sucking out the venom.

Over the years this species is known to have become a serious victim in the hands of human predating. In fact, the timber rattlesnake is now enlisted under endangered species.

Here are some striking pictures of the venomous Timber Rattlesnakes! 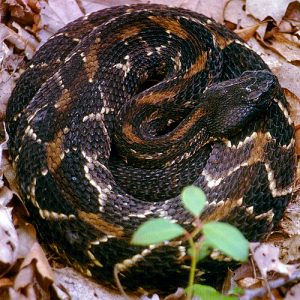 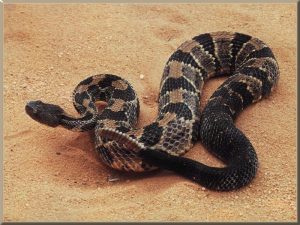