The Southeastern Five-lined Skink is a lizard that is native to the south eastern parts of the United States. As their common name suggests, the these skinks have five characteristic narrow stripes along the length of their bodies that become lighter with age. The current population trend of this medium-sized skink is stable.

Skin: The body is covered with smooth, overlapping, and glossy scales. The five lines are whitish to orangish in color against a black to brown base.

Feet: The hind limbs are longer with longer fingers than the fore limbs.

Eyes: Round and completely black.

Tail: The stripes on the body go through the body’s total length down to the tail, covering about half the length.

The stripes of the male skinks fade with their age, however, those that are in the female is for a lifetime. Also, the width of the male’s head and body are slightly larger than that of the female.

The skinks can live for around 6 years in the wild, but for up to 10 years as pets or in zoo captivity.

These five-lined skinks are found widely scattered across the southeastern USA. The geographical range extends from southern Maryland to the Florida Keys, and west of Tennessee, Mississippi, Kentucky, and the eastern part Louisiana, avoiding most parts of the Appalachian Mountains.

This species is found distributed across a wide area in its range. The habitat range of these creatures extends between 200,000 and 2,500,000 square km. Their habitats including field and forest edges, urban or suburban woodlots, mixed pine-hardwood forests, locations with lowland pines, and around man-made structures. Commonly, this skink can be found under debris and wooden logs, inside the logs, as well as under bark. 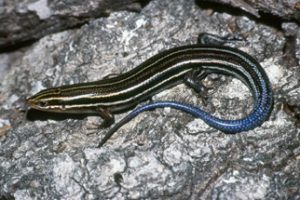 The common five-lined skink (Plestiodon fasciatus) is also a skink that looks very similar to the SE skinks, and it is quite difficult to discriminate between these two lizards just on the basis of physical characteristics. The primary differences between the two are that, the former is slightly smaller the southeastern five-lined skink, and its stripes are broader.

Are the SE Five-lined Skinks Poisonous

All the three species of skinks found in the North American state of Florida, viz. the southeastern five-lined, the common five-lined, and the broadhead skinks, are widely referred to as ‘scorpions’, and it is believed that they have a poisonous sting. However, this belief is completely false. Though they might bite, if provoked, but these skinks are completely harmless to humans, and are also not dangerous or harmful to domestic dogs or cats.

Southeastern five-lined skinks are primarily ground-dwelling animals. They do climb up the trees in the wild, but they are less arboreal than the broadhead skinks. Although, at times, they are found in the open areas, and if pursued, they would run away in speed and take refuge to the nearest tree or log. This makes them quite difficult to catch.

These skinks are diurnal, and usually dwell in within the cracks of structures, or in logs of wood. This happens mostly during the chilled months of winter. The grown-up individuals emerge earlier from their hibernation than the juveniles. The male lizards are not territorial, and do not guard their home ranges. Although, the males have been seen becoming aggressive in defense of specific sites. These skinks do not migrate. 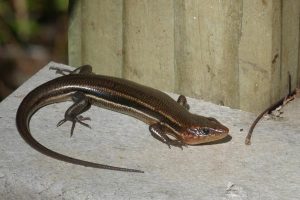 Till date, no systematic study on the diet of this species has been conducted, and hence, not much is known about their position in the food web chain. However, they are mainly invertivores, i.e. majority of their prey includes invertebrates. Specimens have been found having eating ground beetles, other unidentified beetles, wood roaches, caterpillars, wolf spiders, other unidentified spiders, grasshoppers, centipedes etc.

There is no conclusive evidence of the exact season of mating, but it is believed that these reptiles mate through April into early May. However, research and observations say that the head of the male turns orange prior to breeding.

Female southeastern five-lined skinks lay clutches of eggs in rotten logs, stumps, and moist soil during the summer (early June to early July), attending the eggs until they hatch. These creatures seem to produce only one clutch per year, with the clutch size ranging between 7 and 11. The incubation period is not known. 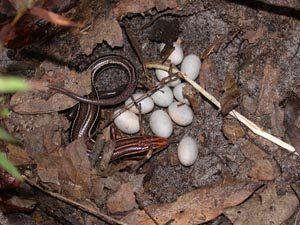 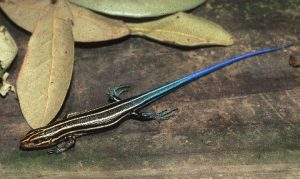 The young hatchlings are born with five narrow light stripes on a black background. The stripes begin to show as vibrant to reddish orange on the head and turn yellow on the body, and finally blue on the tail. The dorsolateral stripes may be made up by series of small spots. 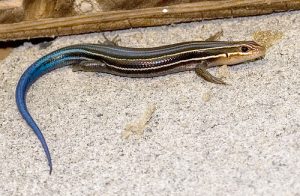 There have been no recorded predators of these skinks. However, a study in the state of Alabama has found that the by introduced fire ants prey upon the eggs and the babies of these creatures.

The southeastern five-lined skink is not a threatened species. The IUCN 3.1 has categorized them under the ‘LC’ (Least Concern) species list. 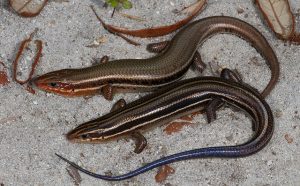