The Saltwater Crocodile, also known as ‘Estuarine crocodile’, ‘Indo-Pacific crocodile’, or ‘saltie’, is the largest living reptile that has gained the bad reputation of being a man-eater. It is considered to be ‘partly marine’, and infests the salty waters and marshlands of most parts of south and southeast Asia, down to the continent of Australia.

This heavy-weight, giant-size croc is easily capable of devouring almost any living thing that would enter its territory. And because of their mammoth size and territorial disposition, these carnivores are the largest of all crocodilians that are potentially dangerous to humans. 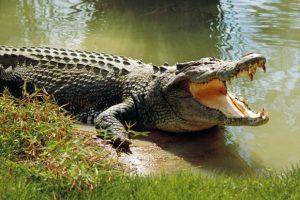 Size: The adult male generally measures between 14 and 17 feet, while the females are much smaller, not exceeding 9.8 feet in length. 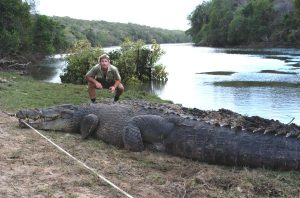 Weight: Usually weighs between 400 to 1,000 kg, but would seldom grow larger.

Head: Relatively larger than the body.

Eyes, Ears, Nostrils: Located on top of the head like all other crocodilian species.

Skin: Typically rough skin like all other crocodiles. Adults are usually dark in color, but having gray to lighter tan areas, with stripes and dark bands on the lower flanks. The underside (belly and chest area) is whitish to creamy yellow.

Feet: Four strong, webbed feet like all other crocs and alligators.

Tail: Extremely strong, muscular tail that is flattened on both sides. 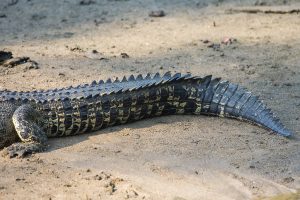 Teeth: The mouth contains about 40-60 large teeth that are designed for ripping flesh off its prey, since they swallow the food on the whole. 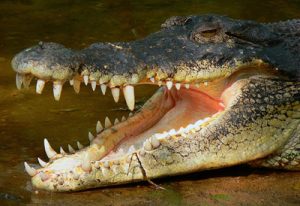 The saltwater crocodile lives for about 70 years. However, some specimens have also been found to live for more than 100.

Habitat: Where do Saltwater Crocodiles live

The Crocodylus raninus has been considered as a subspecies of the saltwater crocodile (Crocodylus porosus) but certain researchers are now considering it as a valid species. 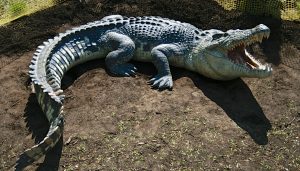 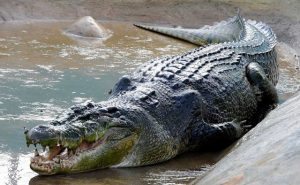 These crocodiles are opportunistic predators and would prey upon anything they can fit their jaws on. The salties are able to leap as high as 7 feet. They would suddenly explode out of the water with a thrash of their strong tails, hold the victim by their jaws and drown it under water. These crocs can travel over a thousand kilometers by sea. This explains the reason for their wide distribution.

These animals are a giant-headed species with a heavy pair of jaws. These animals are extremely territorial, and it is this nature that instigates them to attack other animals (including man) most of the times, when they accidentally ‘intrude’ into their territories.

They have a strong homing ability with which they would find their way back home, be it in the same river or a different another river system. Research suggested that, a problem crocodile that has been captured from one place and released somewhere else would return back to its original residence anytime between 10 days and 3.7 years. Hence, this method has been not much effective.

They can move very quickly on land and in the water, as also have an excellent sense of hearing, which they utilize while locating its prey. They communicate with each other using sounds, as also chemical and visual signals. Body posture also plays an important role in signaling, e.g. raising of the snout would mean submission, while arching the tail would signal a display of threat.

The glands present underneath their chins and the cloacae transude a ‘musk’, which is thought to be playing a role during courtship or marking their territories. They can also live well in fresh water. Biologists have found them living up to 235 kilometers away from the sea.

Diet: What Do Saltwater Crocodiles Eat

Although large crocodiles can easily consume large-size animals, just anything that would come in their way, they mostly feast upon relatively smaller ones. Prey items might include crustaceans like mud crabs etc., and vertebrates like snakes, shore, and wading birds, turtles, goannas/lizards, etc. Large adults at times devour larger prey including wallabies, wild boar, monkeys, buffaloes and other domestic livestock, and even sharks, like bull sharks, etc. Some specimens have even been seen preying upon adult tigers.

The act of mating of the salties occurs underwater, which can hardly be seen. Their complex mating ritual includes rubbing their heads together with their bodies.

The crocodiles mate in the wet seasons, as the water rises to the highest levels. As the water warms with the incumbent wet season, these creatures start mating frequently.

The males will mate with multiple female crocodiles during their breeding season, and generally play no role in parenting. 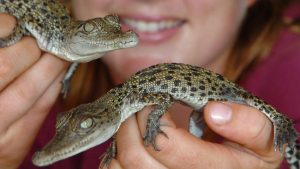 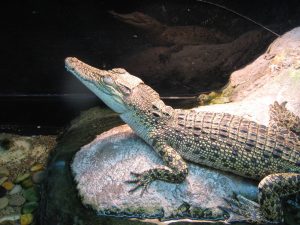 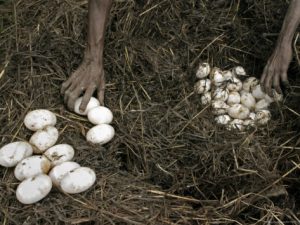 The female crocodiles usually lay their eggs between November and March. As the females select a site for nesting, both the sexes engage in defending their nests along tidal rivers or freshwater areas. The nest, normally, is a mound made of mud and vegetation. The female lays 40-60 eggs.

The female croc would guard the nest for 80 to 98 days. However, they often loss the eggs because of high flooding and occasionally to other predators. As the eggs develop, the female would help its babies out as it hears their screeching sounds.

Baby crocodiles are often predated by larger crocodiles, predatory fish, monitor lizards, various aquatic and raptorial birds. In some ranges, they also fall prey to leopards and tigers. Only 1% of the juveniles reach their complete adulthood. It takes almost 7-10 years approximately for a baby saltwater crocodile to grow up.

The saltwater crocodiles are at the apex of the food chain. With the big cats avoiding the territories of these dangerous creatures, it is needless to say that, these crocs have no known predators.

The present population estimate of the saltwater croc ranges from 200,000 to 300,000 worldwide, and are considered to be at a low risk of extinction.

The saltwater crocodile is not a threatened species. The IUCN 2.3 has categorized them under the ‘LC’ (Least Concern) species list.