The Ruffed Grouse (pronunciation: ruft growz) is a North American grouse that hovers through the woodlands, and are hard to locate. Belonging to the order ‘Galliformes’, they are related to chickens, turkeys, pheasants, and quail, and spend most of their lifetime in the forests. The ruffed grouse has got its name from the tufts of black feathers on its neck. Though mainly a ground-dwelling bird, they are skilled fliers, and are often confused with the ‘grey partridge’. They are one of ten species of grouse that are found in North America, and mostly in those parts of the country where snow is an integral part of the winter scene. 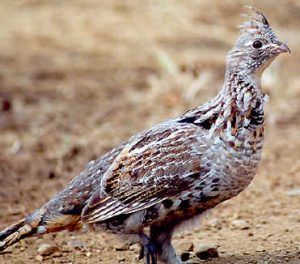 Feather/Plumage: The coloration of the ruffed grouse is obscure. It is generally a combination of buff, brown, mottled grey, and black. They have a lighter plumage that is barred on the belly and the lower part of the breast. They also have a rugged, small-sized crest.

Feet: Like other species of grouse, their legs are covered with fine, wispy feathers that have run down to their ankle. The part below the ankle is grey-blue that remains bare.

Eyes: The eyes are small, black, round and bead-like, placed just in the middle of their small round head.

Nose: Like most other bird, the nostrils are placed just above their beaks.

Tail: The combination of body colors has extended up to the bird’s tail. The tail is somewhat square in shape with a broad, black band at the tip.

Bills: The bills of these birds are brown, and are small but thick, curved. 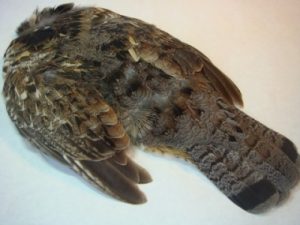 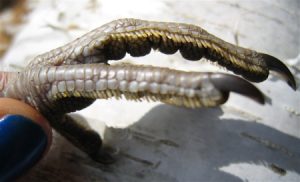 The male and the female have very little difference. The main differences through which the sexes can be distinguished are: 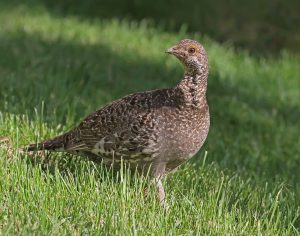 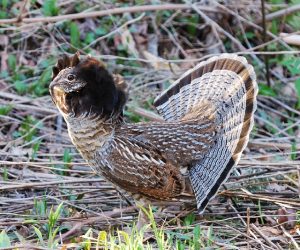 The life expectancy for these birds is 1 year on an average. However, if an individual can survive its first year, it is likely to live 2-3 years.

These birds are native to the USA and Canada. In the US, their location extends far up to the north till central Alaska, and as far south as northern Georgia. The grouses naturally occur in at least 38 of the American states, and are also distributed widely in all territories and provinces of Canada. 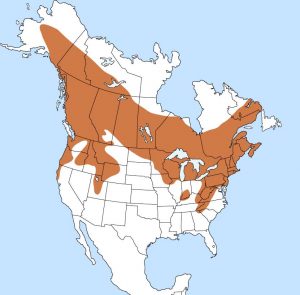 These birds were introduced to the islands of Saint Pierre and Miquelon in the north-western Atlantic Ocean. Both of these islands are a part of the French territories.

Habitat: Where do the Ruffed Grouses live

The grouse is widely found in different montane, boreal and temperate forests. These birds prefer mixed woodlands rich in poplar, birch and aspen. Those that dwell farther south prefer hardwood, including hickory and oak trees. Trees with openings are an important habitat component for these birds. However, they are also seen perching in edge habitats like overgrown shrubby pastures, orchards, and wetlands margins.

Autumn finds these birds dwelling around alder, hawthorn and blackberry thickets, and in overgrown apple orchards as feeding and cover sites.

There are 14 distinctly recognized subspecies of the ruffed grouse:

Though, intermediates between these two morphs do also exist.

The ruffed grouse loves to walk. It wouldn’t keep flying frequently like most birds do. However, if it is startled, frightened or surprised, it would burst into flight instantly. During the winter months, these birds would burrow into the snow for warmth, and would suddenly burst out of the snow if they are approached too closely.

They are acrobatic fliers, though their flights do not last long. They fly in short spurts and are able to make sharp twists and turns quickly. It is also excellent at climbing on thin branches and stems.

These birds are non-migratory and are fairly solitary, except during mating season, when they all gather together. The males of the species are aggressive and territorial throughout their adulthood. They defend their territories – a piece of 6-10 acre woodland which they generally share with one or two hens (females). 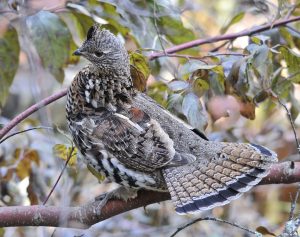 Though primarily quiet, when a ruffed grouse is alarmed, it would emit a clucking or whining noise. This is specifically common with the females with chicks. Calls emitted by the females include a nasal squealing or hissing alarm, and also a ‘pete-pete-peta-peta’ call made before flushing. They also emit a low, cooing hum to gather their brood. They have also been heard producing a wide variety of peeping, chirping, and hissing.

Diet: What a Ruffed Grouse eats

The ruffed grouses are omnivorous. However, they primarily prefer consuming berries, catkins, acorns, twigs, seeds, buds, leaves, and fruits. They also thrive upon some fernsrose hips, strawberries, and the green leaves of clover, worms and insects. 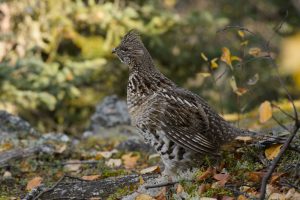 The ruffed grouse is characterized by its non-vocal acoustic display known as ‘drumming’. It emits a typical thumping sound, which is mainly a courtship display done by the male primarily to attract the opposite sex. However, it is also intended to mark the territory of the displayer and also for keeping other males (competitors) away. The sound of the drumming, produced by rapidly beating its wings in front of its body, is so loud that it can easily be heard through the dense woods up to a distance of ½ a kilometer. However, their courtship is usually short, lasting only for a few minutes. 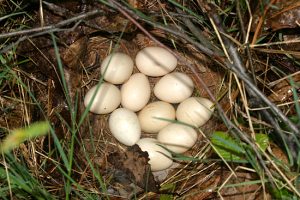 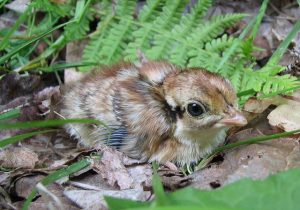 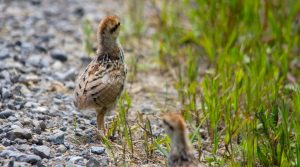 Usually, mating takes place between the months of April and May. These birds are polygamous with both the sexes mating with multiple partners during their breeding season. The female grouse would make its nest on the ground, usually under a bush or near the roots of a tree. They line the nest with leaves and feathers to keep it soft and warm. The nest of these birds is usually hollowed-out depression measuring about 6 inches across and 3 inches in depth, and is bowl-shaped. The male bird does not play any role in the process of nesting and rearing the babies, but leaves soon after mating. Ruffed Grouse nests are occasionally parasitized by a few other bird species like Ring-necked Pheasants and Wild Turkeys that also lay their eggs in the R. grouses’ nests. 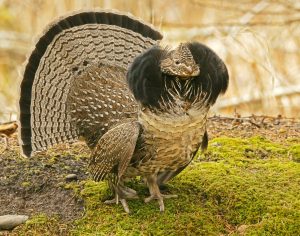 The clutch size of these birds is between 8 and 12. The female birds generally incubate their eggs for a constant period of 23-24 days after which the cream-colored eggs would hatch out the chicks. Although they often take two quick breaks every day for their meals.

The chicks are tan colored with brown stripes. The baby grouse looks like a smaller version of the female, except the dark band on the tail tip and a less distinctly-marked head.

The hatchlings are precocial being able to feed themselves with small spiders and insects. It is during this time that the insect population decreases to quite an extent. The babies would take around 12 days to fly. Soon after, the female will go on its own way, and the young are on their own. 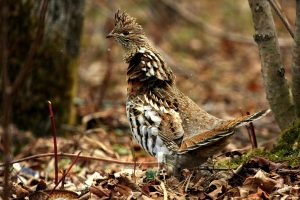 The baby grouses weigh around ½ an ounce when they hatch out, but grow very fast, increasing up to 38 to 46 folds, i.e. 17-20 ounces within a few weeks. During their developmental stages, the hatchlings need an ample amount of animal protein at the prime of their lives, especially for the growth of their muscles and plumes. During the first few weeks after their birth, the chicks feed upon a large number of insects, worms, flies, and other small creatures. As the baby ruffed grouses grow up, they gradually shift to consuming fruits and other plant greens.

Within 4 months, they transform into full-grown young birds, and within another week, they reach the size and weight as they will ever attain in their lifetime. 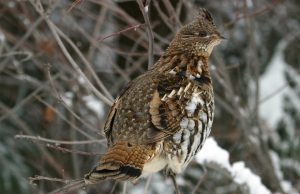 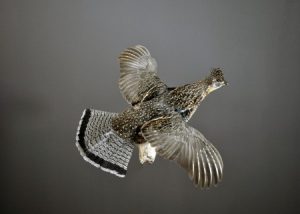 Falcons, hawks, coyotes, foxes, and bobcats are the primary predators of the ruffed grouse. Though, they are also hunted by humans as an important game bird.

The ruffed grouse is not a threatened species. The IUCN 3.1 has categorized them under the ‘LC’ (Least Concern) species list. 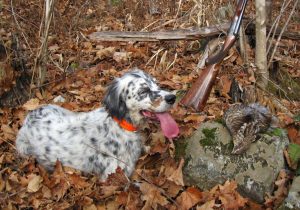 One response to “Ruffed Grouse”