Red crowned cranes are one of the rarest species of cranes in the world, still struggling to uphold their striking beauty into existence. These species are East Asian cranes, also known as Manchurian cranes and Japanese cranes. These species are the largest amongst its family. The bird species is named as red crowned crane because of its red patch on its head, enhancing their beauty even more. 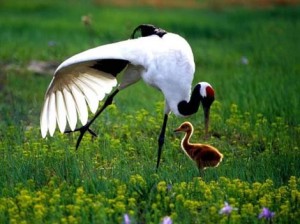 Picture 1 – Red Crowned Crane With A Young One

The bird has a red patch on the crown of its head, hence the name given as red crowned crane.

Eyes: Red crowned cranes have small, round, and dark eyes.

Neck: Red crowned crane bird has typically crane like long and thin neck. The neck is black till it reaches the head.

Body: The entire body of the red crowned crane is snow white. At the end of the trunk, near its tail, it has jet black feathers.

Wings: The bird has long feathery wings on both sides of its body.

Legs: These cranes have long and thin legs, with pointy fingers.

Weight: An average grown up Red crowned crane weighs between 7.5kg and 10.5kg.

Though this species is called red crowned crane, but it actually belongs to the Typical Crane genera. Red crowned cranes are DNA wise most remotely associated to the other kinds of the typical crane species.

This species of cranes differ in behavior from other cranes in some ways as well as familiarize with them in many ways.

Red crowned cranes are well known and extremely admired for heir gracious dancing skills. Dancing marks a very special behavioral trait of the Red crowned cranes. They have been observed to dance elegantly with their wings spread graciously. The dancing is a confirmation of their happily courtship period. They also dance at times to vent out their tension. But the most observed rationale behind their dance is to declare, express happiness, and strengthen the bond of courtship.

The Red crowned cranes fly like other cranes, but due to their heavy weight they cannot fly as fast as other species of the family tree.

Wetlands are the native lands of Red crowned cranes. Korean peninsula, Japan, and China are the main residence of the species. Parts of southeast Siberia and north of Manchuria are also graced by the presence of this exotic species of bird. Their range does not envelop a large area, but they are migratory in nature and thus can be seen in warmer pats of the world during their off seasons, the species is accustomed to quite low temperature.

The Red crowned cranes fly their way to Siberia, north-east part of Mongolia, and north-east China during springs and summers. During the fall they flock their way back to east-central of China, and Korea.

The resident population of the species nests in eastern parts of Hokkaido, Japan.

The Red crowned crane inhabit in wetlands. They usually nestle in and around marshy lands, rice fields, river banks, and other wet and damp areas. 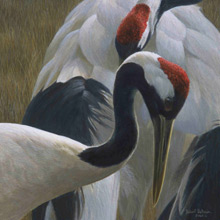 This species of birds are not much choosy when it comes to food. They feed on many small vertebrates and invertebrates. They mostly diet on small worms, aquatic weeds, aquatic invertebrates, crabs, etc.

During winters the Red crowned cranes diet on rice at the paddy fields.

In the wild every animal has a predator of it. Red crowned crane’s huge size and pointy, hard beak helps it elude predators. The beak and the large body of the species is the most helpful feature in adapting itself to the nature and its threats.

Studies show that only 2750 Red crowned cranes are still existent. This estimation includes both resident and migratory birds.

The exact life span of Red crowned crane is not known. Specially the wild ones are nothing known about regarding life span. Studies showed that the species survived more than 60years when bred in captivity. Research concluded near to the fact that these birds live about 30years in wild. But nothing can be assured with certainty.

Red crowned cranes are life-long monogamous in nature. They reach reproductive maturity by the age of 4yrs to 5yrs. They mostly breed in north of Manchuria and south-east part of Manchuria. The time span is usually end of March and entire April.

This stunning species of birds are extremely endangered these days. Studies show there are only 2750 Red crowned cranes still existing. There are some serious issues as to the reason of their existence threat.

The ICF has taken up the responsibility of conserving this exotic species of bird. Agreements are being settled at for conserving the water bodies n the areas of their migration period. Arrangements are also being taken care of so that their natural habitats are not disturbed for human density accommodation.

This marvelous species of bird is not only an awe-inspiring beauty, it also has some very interesting facts about its nature and behavioral ways. 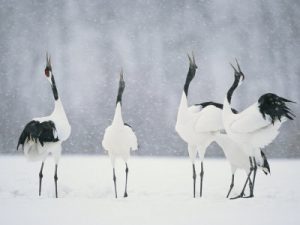 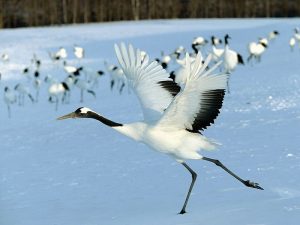