The Pool Frog is a water frog species mainly found in Europe. They were first recognized as a distinct species in 1973. These greenish brown frogs are often confused with other common frog species.

Here is a general description of these water frogs:

Size: Their lengths vary between 2.5 and 3 inches. The females are larger in size than the males. Pool Frog tadpoles are 5 mm to 9 mm long when born, growing between 50 mm and 75 mm before metamorphosis.

Color: The body color ranges from olive green to brown with dark brown spots covering their dorsal side. A yellow line runs down the middle of their dorsal side. The ventral side or belly is off white or creamish in color. They have golden coloration around their eyes.

Head: These frogs have a pointy snout. There are no dark patches around their eardrums behind the eyes unlike other frogs.

Eyes: This species of amphibians have horizontal pupils. 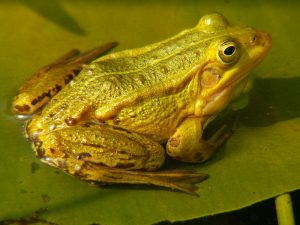 These water dwelling frogs are commonly found in different European countries including Austria, France, Germany, Italy, Netherlands and Belgium. Their distribution range also includes United Kingdom and some Scandinavian countries such as Denmark and Sweden.

These frogs live in small, sunny and permanent water bodies surrounded by woodlands. They also inhabit ponds and lakes amid meadows. They prefer water lands where the sun easily heats up the water. Their habitation range consists of many water bodies simultaneously. These amphibians can be seen basking on floating leaves and vegetations in their watery habitat.

In their native habitats they were found in pingos or a type of pond created by depressions in the ground during the last Ice Age.

This frog species have some unique behavior patterns different from other similar species: 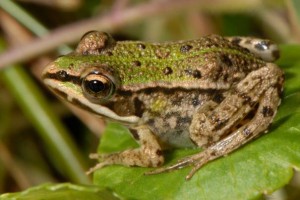 This frog species have many adapti thve features that help them to survive in their natural habitat:

Their reproductive season starts in May and continues through end of June. In some areas reproduction starts as early as March.

These frogs attain sexual maturity at the age of 2 years to 3 years. Mating takes place immediately after they get over with hibernation. The males call out loud to attract the females. They reproduce in still water bodies like ponds, swamps and lakes. The females lay 500 to 4500 eggs in each clutch. These eggs are externally fertilized.

The incubation period lasts for 21 days, depending on the climate.

The Pool Frog tadpoles start to metamorphose (process of turning into froglets) between August and September.

Lifespan of these frogs ranges between 6 years and 12 years.

Their call sounds like a rapid snoring with each croak lasting up to 1.5 seconds. They call both in day and night during their mating season. These frogs call out in a loud croaking sound when threatened.

Hibernation of this water frog species starts in fall and continues through spring (September to November). They also hibernate from March till May in some colder areas. These amphibians hibernate on land, inside tree cavities and frost-free holes.

Here are some interesting facts about these amphibians:

According to IUCN records, this species of amphibians is listed as Least Concerned.

Here are some images of these wonderful water frogs. 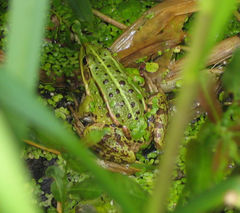 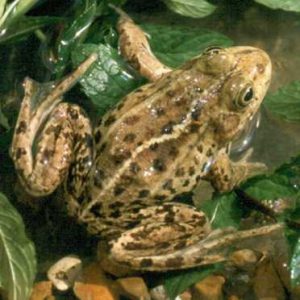