The Plains Zebra, also called ‘Common Zebra’, ‘Burchell’s Zebra’, and ‘Painted Zebra’, is an ungulate and equine from Africa that is native to over 15 African countries. The population of this social species is stable. However, some regional populations, like that in Tanzania, have sharply declined. Their beautiful body stripes, patterned with alternating stripes of black and white, have given them a unique look and immense popularity. 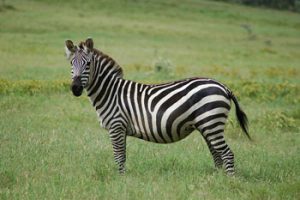 Weight: They can weigh anything between 175 and 385 kilos.

Hair/Coat: They typically possess broad and bold black stripes on a white base. Stripes are vertical on the body, but turn horizontal on the hindquarters, with the northern species having narrower and more defined striping than their southern counterparts that have lesser striped on the legs, the hindquarters and the under parts. The stripes tend to disappear around the rear and the inner walls of their feet. Short straight manes are present on the neck.

Tail: The tail is short, measuring about 47 – 56 cm, ending with a small tuft of black hair (making them different from other equids).

The males zebras tend to be a little larger (about 10%) than the females, and also have thicker necks. However, these differences are not necessarily profound.

Difference with other Zebra Species

The longevity of the plains zebras in the wild is almost 20 years, while in captivity, the life span almost doubles at approximately 40. 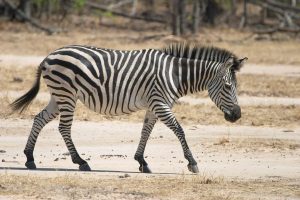 Plains Zebra’s range is fragmented. They are widely spread across the savannahs, the grasslands of east Africa, from Sudan to northern regions of Zimbabwe in east Africa down to the southern Ethiopia till Mozambique, Malawi, and Zambia, and most other southern African countries.

Habitat: Where do Plains Zebras Live

They are primarily, but not necessarily, found in the treeless grasslands in both tropical and temperate regions. These animals normally avoid permanent wetlands, desert regions, and dense rainforests, and would seldom stray more than 30 kilometers from a water source. 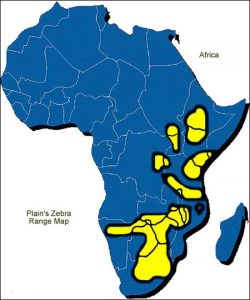 There are six distinctly recognisable subspecies of the plains zebra:

The Zebras are extremely gregarious, living in large groups with a complex social system. This kind of multi-level social organization is unusual with ungulates, and is a characteristic more common to primates, such as baboons. Considering their habitats, this is actually a necessity in order to stay safe from frequent predator attacks. They live in small families with a typical family consisting of a stallion (male), several mares (females), and the juvenile zebras. Known as the ‘harem’, one family can form a group with many other harems, eventually forming a large herd.

A stallion will defend his group from other males. When challenged, the stallion issues a warning to the invader by rubbing nose or shoulder with him. If the warning is not heeded, a fight breaks out. Zebra fights often become very violent, with the animals biting at each other’s necks, heads or legs, wrestling to the ground, and occasional kicking. Sometimes a stallion will lie still on the ground as if surrendering, but once the other male lets up, will strike and continue the fight.

It is the duty of the leader stallion to defend its own group from other males, which often results in fights. If a male is challenged by another, it would initially display a warning signal by rubbing its nose or shoulders against the attempting invader. If the signal is not heeded, the fight that ensues is often violent, ending in biting each other’s legs, heads, necks, and characteristic kicks, resulting in the defeat of one of them.

When attacked by predators, the female zebras would run with the babies, with the males trailing behind for defending them. In case one zebra is attacked, the other members of the herd would encircle the predator along with the victim for the purpose of protecting it. Interestingly, these equines strengthen their social bonds by grooming each other. In a harem, the members often scrape and nip along the back, neck, shoulders, using their lips and teeth. The frequency of grooming is the most between the mothers and the foals, followed by the siblings. 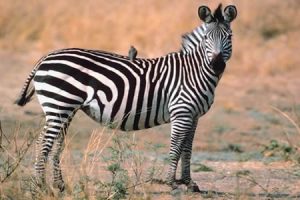 The common zebras are very verbal during communication, with at least six different calls being documented. If they would spot a predator, they emit a bark or a loud whinny in order to alarm the members of its group. If an individual happens to locate a predator, it throws a shrill two-syllable call. Snorts are made mostly during moving together to cover potential dangers or when the males would get hurt. The baby zebras usually wail when they are in distress.

Plains zebras polygamous, and breed throughout the year. However, the number of births reaches to the peak during the wet seasons. The mares live in the harem in a form of hierarchy. The alpha female is the first to engaging in mating with the stallion, with the mare added recently to the harem ranking lowest. However, those females that have become weak or unfit might as well drop in rank. 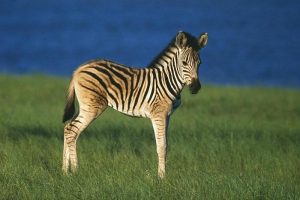 When a female meets its first oestrus period (state or period of heightened sexual arousal and activity in non-humans), it advertizes its preparedness for breeding by displaying several body languages including lowering the head, raising the tail, and straddling the legs. It is during this time that all the males in the heard violently compete to own the female. However, once the female would find a perfect match with a successful male, it would never again advertize during the oestrus period.

Life Cycle of the Baby Zebra

The gestation period of a mare lasts for about 12 to 13 months, with the litter size being 1. A pregnant female would be taken care of by the father itself. After birth, the baby is able to stand on its own feet almost instantly. Usually, the mother would keep other members of the herd away from its infant for the first 2 to 3 days, until the foal learns to recognize its mother by voice, smell and sight.

The young ones would start eating grass within a week’s time. The baby zebras are born with brown and white stripes, which gradually start to turn black with age. The young zebras are weaned (freed of dependence on mother’s milk) at 7 to 11 months of age. Foals attain the age of sexual maturity (or puberty) at 16 to 22 months of age, and by the time they are 1-3 years old, both the male and the female juveniles would quit their natal herd. 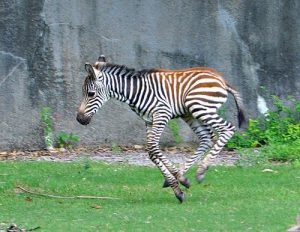 A male young would join a group of bachelors until it is capable of competing with other males by 4 years of age. These young males begin preparing themselves for their adult roles by practicing greeting or challenge rituals, play fights, etc.

Diet: What Do Plains Zebras Eat

The Plains zebra spend two-thirds of the day grazing. Their main diet includes variety of grasses (like red oat grass). They would also consume roots, bark, stems, leaves and twigs. Research revealed that, the diet of these zebras constitutes 92% grass, 5% herbs, and 3% shrubs. 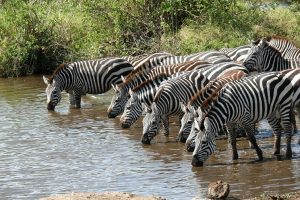 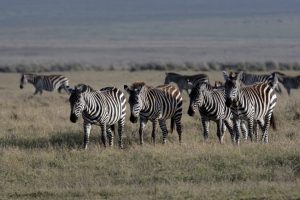 Zebras are known to migrate very long distances to find water and food, especially when the dry season arrives. They will travel up to 1800 miles just for food. In short distances, they tend to move in herds during the day to pastures having long grass, while they would return back to the areas with shorter vegetation at night, where their predators have less cover.

The primary predators of the plains zebras are the lions and spotted hyenas. Nile crocodiles also pose a big threat especially while crossing the rivers. Wild dogs, cheetahs and leopards are minor predators. 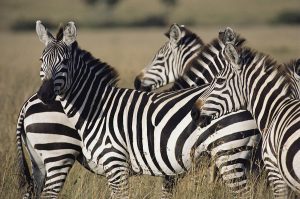 The biggest threats of this species presently are habitat loss, which is mainly because of farming, ranching, and the competition for water with the livestock. These animals are also hunted by humans especially for their beautiful skins, but also meat.

The Plains Zebras are not endangered. The population of these equines is high and stable. The IUCN 3.1 has categorized them under the LC (‘Least Concerned’) species list. 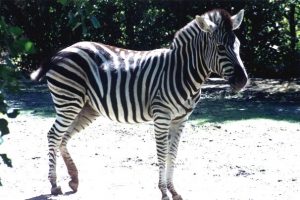