Nubian Ibex is a desert goat primarily found in the rugged mountains of the Nubian Desert region, spread across northeastern Sudan in Africa

Weight: A full grown Nubian ibex weighs between 25 to 70kg.

Color: The outer surface of the body is sandy brown which is a bit lighter at the back. The belly region and the legs are generally white. The males possess dark brown stripes down the back of their bodies. The legs have black and white marks spread around them. The color of the neck, chest, shoulders, upper legs, and sides, turn dark brown which can at times turn black in males during the hot month of October. The male goats have long and dark colored beards. 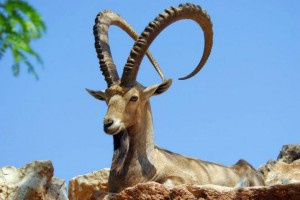 Horns: Ibexes have long and thin horns. The horns grow up long and then bend backwards. The male usually has a meter long horn, while the female horns are much smaller, growing not more than 12inches.

Nubian Ibex is widely found in Oman, Egypt, Israel, Jordan, Saudi Arabia, Ethiopia, Yemen, and Sudan. Due to lack of data it cannot be confirmed, but there have been traces of this species found in Syria. Earlier it was found in Lebanon but currently it is extinct in this region.

These mammals live in the rugged desert mountainous terrains that are steep and have rough and rocky slopes. They prefer living in the remote areas. These animals are also found to live in the plateaus, canyons and wadis.

There are a lot of interesting behavioral patterns found in these animals: 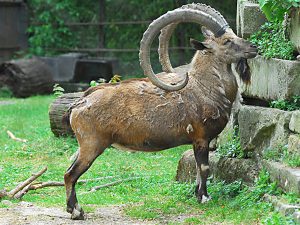 Being herbivorous in nature, the Nubian ibex generally feeds on grasses and leaves. At times they prefer feeding on buds and fruits. They also prefer eating casabas.

They are threatened by leopards, eagles and bearded vultures.

These animals have strong hind legs. Both male and female species use their hind legs in defending themselves against potent dangers and threats from predators. The desert goat raises its body on its hind legs and points its horns while being threatened.

The herds comprising of males and females come together in groups largely during March and November. However, there are believed to be two mating seasons in these animals. Autumn is the first mating time with the spring being a good time to mate. The second mating season has developed recently due to changes in the evolutionary processes. Mating season depends largely on the capabilities of the female to become pregnant. A female which is able to bear a child twice can opt to mate.

Sexual maturity is reached at 2 to 3 years of age by a Nubian ibex. Males feel mating urge during late autumn. During the period of male “rut”, they separate themselves from their bachelor herd and find their way to a female herd to select a prospective mate. 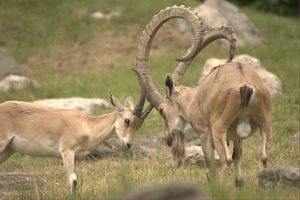 Male fighting is common during the choosing of mates and selecting available female goats. Females gestate for 6 months approximately. Normally a single baby is born to a female Nubian ibex during May.

Lactation period lasts till 3 months age of the baby then the mother starts feeding the new born along with the adult child. When the babies reach 3 years of age they tend to stay with their mothers becoming a part of the group.

An adult lives for around 17 years. Adult males are often found to live alone.

IUCN has indicated Capra Nubiana on a vulnerable status. There has been a great decline in the population of this species for over a decade.

Some interesting facts about this animal:

Here are some spectacle images of Nubian Ibex. 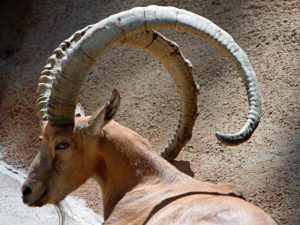 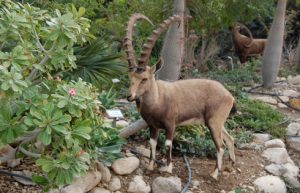