Malayan tapirs, also known as the Asian tapirs, are one of the five species of tapirs. Well-known for their unique coloring, they are the only tapir species inhabiting Asia. 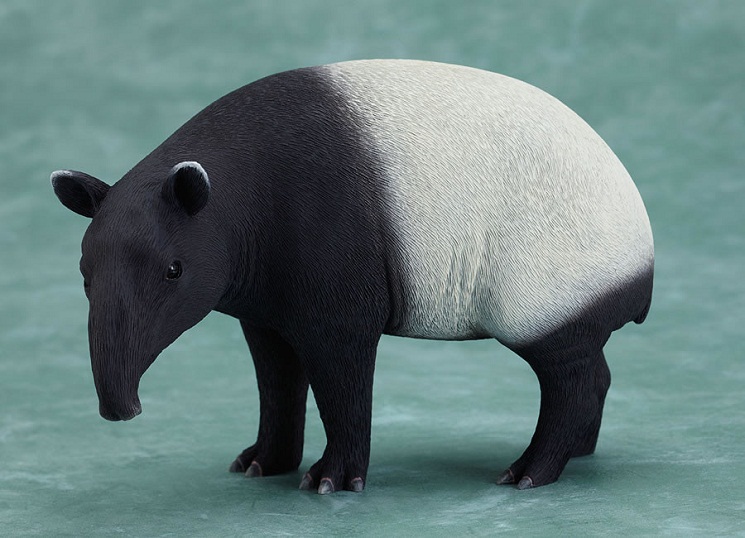 Color – This animal has a black body with a white pelage from the shoulder to the back end. White is also seen in the borders of the ear. Rare cases of melanistic Malayan tapirs, i.e. ones with all-black coloring have been reported in the wild.

Toes – They have four toes on the front feet and three on the hind feet.

Sexual Dimorphism – Females are larger and heavier than males.

The Malayan tapir can be found in southern Vietnam, southern Myanmar, southern Cambodia, Malay Peninsula, Tak Province of Thailand and south of the Toba Highlands in Sumatra.

They mostly live in tropical rain forests, primary forests, secondary forests, jungles, rubber plantations and forest edges. These species of tapirs are even found in open fields and cultivated areas, though rarely. 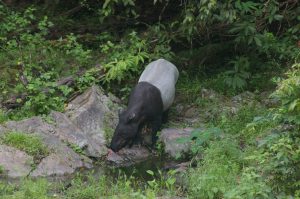 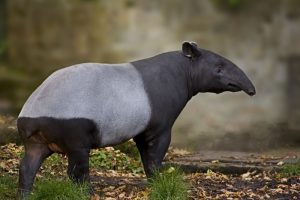 Their breeding season lies between May and June, every alternate year, where they form monogamous pairs. Mates introduce themselves with their prospective pairs through scents and visual signals. After choosing their partners, they engage in courtship rituals before copulation. After a gestation period of around 13½ months, a single baby tapir is born, although the birth of twins has also been reported.

The offspring are weaned at around 6 months of age, near about the same time their unique striped and spotted black and white pattern starts to fade. They usually become independent when the mother produces another calf, although some juveniles have been observed lingering even further. They reach sexual maturity at around 2½ years, though males might take a longer time. 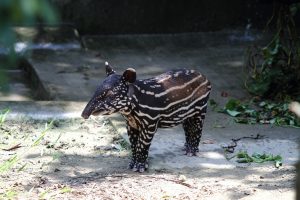 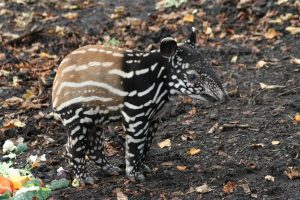 A Malayan tapir lives for around 30 years in the wild. In captivity, they have been reported to survive for 36½ years.

They are exclusive herbivores, foraging slowly through the forest looking for food. They eat leaves, fruits, and tender shoots of various species of plants.

They communicate mainly through clicks, whistles, and a hiccup-like sound. 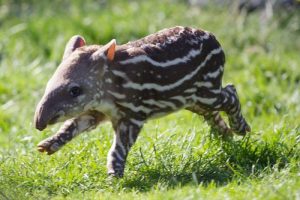 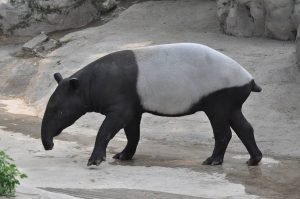 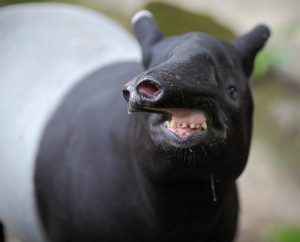 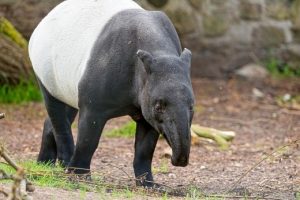 Because of the Malayan tapir’s size, camouflage and running speeds, no animals other than leopards and tigers, including the Sumatran and Malayan tiger are known to prey on them in their respective ranges.

The Malayan tapir has been conferred the ‘Endangered’ status by IUCN Red List.

Why is the Malayan tapir endangered

Habitat destruction is one of the principal causes for their population decline, taking them close to extinction. They are also routinely hunted for food across most of their habitat, except in the island of Sumatra, where the human population considers tapir meat taboo because of their religious beliefs. Conservation efforts are, however, underway to bring Asia’s only tapir species to a point where their population thrives. 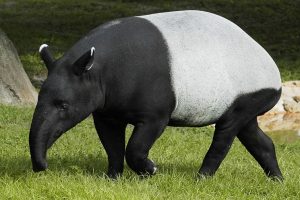 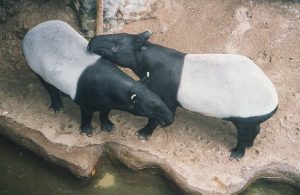