The Harpy eagle is almost a mythological creature. This beastly bird holds a position in Greek mythology. Due to its appearance it is considered to derive its origin from the clan of Harpies, which according to Greek mythology were deadly and ferocious flying monstrous creatures with wings, sharp and demonic strong claws, woman’s face, and vulture’s body. Harpy eagles are the most powerful of all the 50 kinds of existing eagles on earth in this date. 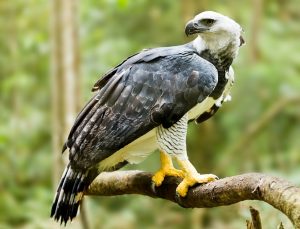 Bill : Bill of Harpy eagle is stout, huge, and hooked. It is dark grey in color and has grey cere.

Legs : Their talons are very powerful. Their claws are black and long, making it easier to catch the prey and fly away with it.

Tail : Their tails are long and the feathers are primarily white and gray.

Color : Head of this bird is white, so are the thighs and underneath parts of it, along with the most of the ail bands. Some have grey head also. Back pf this bird is black. Their feet are yellow in color.

Not much is known about the behavior of Harpy eagle in the wild. The very less information that could be accumulated is given below.

Harpy eagles are carnivorous birds. They usually prey on arboreal mammals. Monkeys, porcupines, opossums, and sloths constitute their usual diet. They also feed on small and big reptiles like iguanas, other smaller birds, and mammals like young deer, pigs, etc. 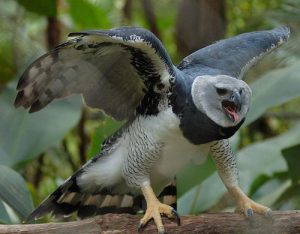 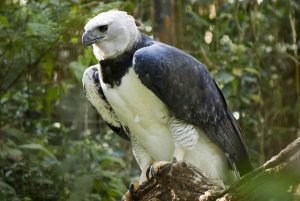 Harpy eagles are territorial birds. They nest on high tree tops and cliffs in tropical forest lands. They build their nests as high as 40ft t 60ft on the trees. 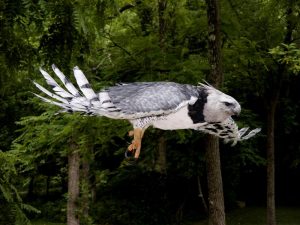 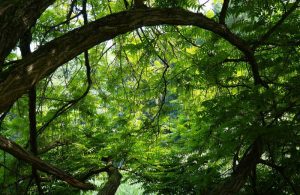 Harpy eagles are fast fliers. They fly at the speed rate of 80km/hr. they hardly soar. They mostly fly, glide, and dodge around through the branches of the trees within the canopy. It helps them prey as well.

Call or sound of the Harpy eagle is a sharp, howling, loud, and shrill alarming screech.

Harpy eagles weave their nests high up on a tree. The female ones lay 1 or 2 eggs a time. After a gestation period of 53days to 58days the first egg hatches. The first hatchling is taken great care of, and the second one is neglected eventually leading to its death. The chick is taken care of till 1year of age at the parents’ nest, though it fledges by 4 ½ months to 6months. 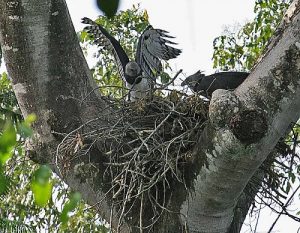 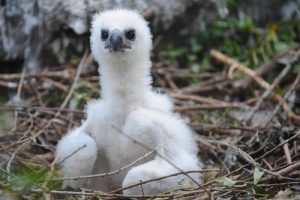 Harpy eagles have very few predators. One of its biggest predators is humans. Apart from humans, lions, bobcats, and some bigger carnivorous animals prey on these eagles.

The greatest adaptation features of harpy eagles that enable them survive in the wild are their extremely sharp eyesight and fast flying ability. They are capable of seeing things from a distance of miles away. They can fly at the speed rate of 80km/hr.

Harpy eagles are assessed to live for about 25yrs to 35yrs in the wild. Some of them have been recorded to have lived for about 40yrs in captivity. 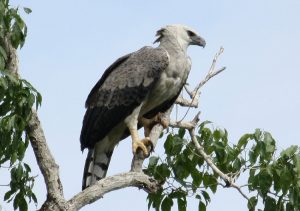 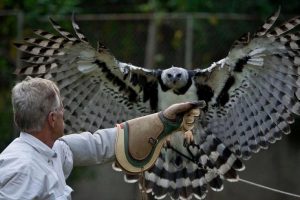 This gorgeous species is almost endangered now. According to the IUCN listing it is under Near Threatened category. The main reason of the species’ existence threat is loss of its proper natural habitat conditions. They are also being hunted down as a supposed threat to live stock and sometimes humans as well.

Many projects are been initiated and funds are being raised all around the globe at the spots of its distribution to conserve this marvelous species. 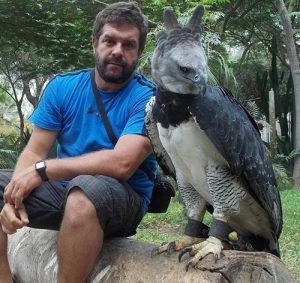 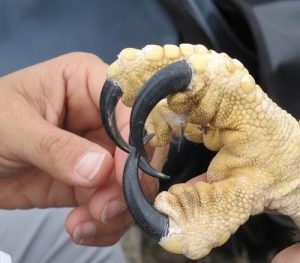 Find some very interesting facts about harpy eagle below. This awe-inspiring species of bird has very intriguing characteristic features.

Glimpse pictures of this interesting and commanding bird. 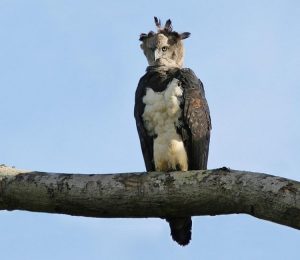 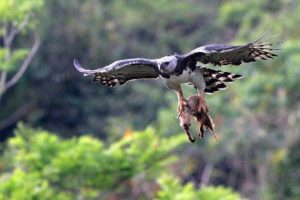