Hamadryas baboons are old world monkeys found on both sides of the Red Sea, i.e., in the Horn of Africa as well as in the Arabian Peninsula.

Color: The pelage of males is a silvery-white, and that of the females is brown. Their faces are pink or red.  Males have a shoulder cape, which is absent in females and juveniles. Infants are much darker in color. Their fur lightens once they reach about one year of age. 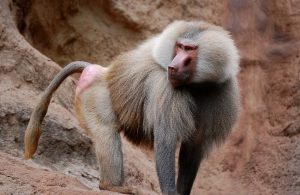 Sexual Dimorphism: Males are almost twice as large as females.

Hamadryas baboons can be found in Somalia, Eritrea, Ethiopia, Saudi Arabia, and Yemen.

They inhabit savannas, semi-deserts, and rocky regions. They also frequent agricultural lands in Ethiopia, thus being considered pests in that region. 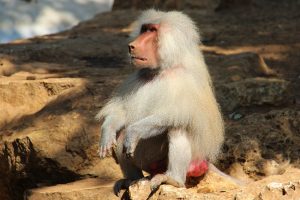 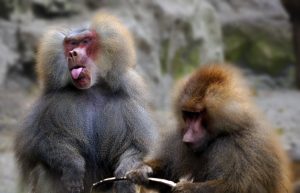 Hamadryas baboons have omnivorous feeding habits. They are opportunistic feeders; likely to eat fruits, grass, roots, seeds, tubers, buds, leaves, and insects. They have also been known to hunt smaller animals like young gazelles and hares. These baboons have adapted to survive on a minimalistic diet of just grass, an adaptation shared by all baboon species.

They do not have a specific breeding season, but births tend to peak around May-July, as well as in November-December. The gestation period is around 172 days, ending with the birth of a single offspring. The infants are looked after by their mothers, on whom they are entirely dependent for the first few months of their lives. 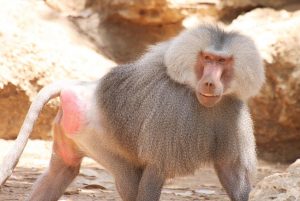 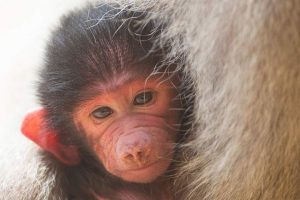 The lifespan of hamadryas baboons in the wild is around 20 years, but they live much longer lives in captivity; around 37 years.

These animals communicate through visual, acoustic, and tactile channels. Adult males use a ‘wahoo’ bark to deter predators and signal to other males of their presence. All hamadryas baboons use rhythmic grunts while approaching another of its kind, to convey friendly intentions. A shrill bark is used by all except adult males to express alarm. Fights between males are usually preceded by them yawning so that they can show off their teeth, a gesture of threat. 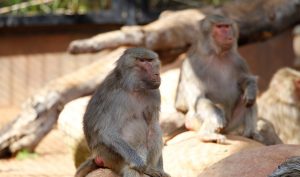 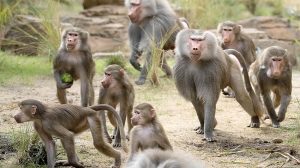 Hamadryas baboons do not have many natural predators in its range, being preyed upon only by leopards and hyenas.

The IUCN lists these baboons under their ‘Least Concern’ category. 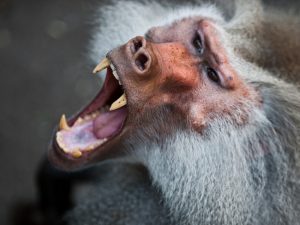 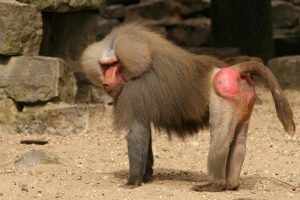