The Blue Monkey is one such specie that has triggered the curiosity of many because of its name. Blue monkeys are not blue in color as one may expect. This species derives its name on account of its face that appears to be somewhat blue in color due to the absence of hair on its face.

However, these animals are interesting to study. Their species belong to the Old Monkey World.

It is important to remember that the blue monkey is not specifically blue in color as its name may suggest. The blue monkey has little or no hair on its face and this tends to attribute a somewhat blue appearance occasionally; as such the name. 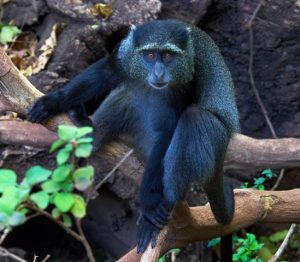 Apart from its face, the rest of its body is generally olive or grey in color with a few black or white patches. The top of the animal’s head appears to be dark in color.

Size: These animals are generally 50 to 65 centimeters long excluding the tail.

Weight: The males can weigh up to 8 kilograms. Females are smaller in size and have an average weight that is slightly more than 4 kilograms.

Tail: The blue monkey is known to have a long tail. At times its tail is almost equal to the total length of its body.

The subspecies of the blue monkey include

https://en.wikipedia.org/wiki/Blue_monkey: This particular subspecies is also popularly known as the Elgon Blue Monkey.

Please note that some of these sub species have also been classified under full species.

Blue monkeys prefer evergreen forest, forest canopy and bamboo forest habitats. Humid, shady areas with surplus water are the environment conditions that these animals mainly seek. The blue monkeys occasionally come down to the ground from the tall trees where they live. In fact they prefer not to come down as long as food resources are in abundance, up in the trees.

These animals are mostly found in the rainforests of central, northern and southern Africa. Blue monkeys have also been traced to be mostly common in the African country of Congo.

Apparently these animals are also known to be found in countries including Burundi, Angola, Ethiopia, Rwanda, Mozambique, Sudan, Tanzania, Zambia, Uganda and Zimbabwe. 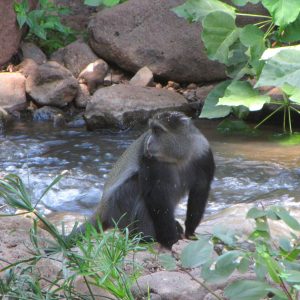 The diet of the blue monkey chiefly comprises of fruits and figs. However, it will not hesitate to feed on insects, leaves and even flowers. Food shortage can sometimes cause these monkeys to even consume the bark of trees.

The female-philopatric social system of the blue monkeys has definitely captured the attention of animal enthusiasts. It is very interesting to note how the group mainly comprises of females with only one dominant male. Research studies discovered that the females preferred to stay back in the natal groups while the males leave as soon as they are mature. The single male gets to mate with most of the females in the group.

Alloparenting is another trait that has been associated with the blue monkeys. The infants are cared after by juvenile females and it is not unusual for one infant to be carried by several alloparents. The males basically do not have much to do with the young ones or infants.

Play and grooming are two of the most common social interactions that can be observed in a blue monkey group.

The blue monkey can be extremely territorial in nature. The only way of seeking survival is by acquiring entry into a particular group. This can only be achieved by challenging and defeating the dominant male of the group.

It is interesting to note how it is the female blue monkeys that take the first initiative to attract the attention of the males. The female extrudes her lower lip forward in a display known as pouting. Female monkeys are known to act in this manner during copulation.

The female gives birth to a one offspring. The baby blue monkey is born after a period of approximately 5 months after mating. It is indeed a spectacular sight to observe how the females of the group take care of the new born in turns.

At times some older females that have undergone the tragedy of having lost a baby may tend to get pretty aggressive by not letting o of the young one belonging to a different mother.

The young are sexually mature by the age of three.

Let us take a look at some rather interesting facts about the blue monkey.

Blue monkeys are known to have an average lifespan of about 20 years.

The blue monkey is not an endangered species; however, this species is a victim to exploitation as it is hunted for bushmeat. It is the villagers who hunt the blue monkey for its meat.

Furthermore, the blue monkey population also tends to get affected as a consequence of habitat loss.

Here are some pictures of the species known as the Blue Monkey. 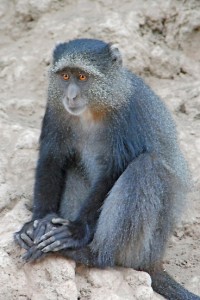 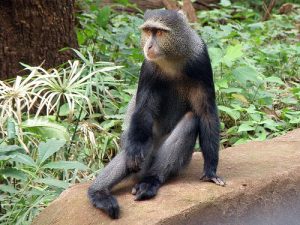