The subspecies of the Green Sea Turtle are: 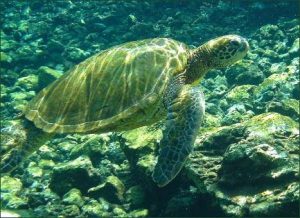 These Sea Turtles have an attractive appearance and coloration. Here is a general description of the species:

Carapace: Their carapaces are 31 inches to 44 inches (78 cm to 112 cm) long. Five central scutes compose the carapaces. The central scutes are bordered with eight lateral scutes. The area between their plastrons and shells are covered by eight inframarginal scutes.

Color: The color patterns of the carapaces change with time. Green Sea Turtle hatchlings have light colored plastrons and nearly black carapaces. The carapaces turn dark olive or brown as they grow up. The matured Turtles have dark brown carapaces marked with rays of different colors, while their plastrons have a yellow hue. Their appendages are dark colored with yellow stripes. Each appendage has a large dark brown patch in its center.

Head: They have small beaked heads with short snouts. The beaks are unhooked. These Turtles have two prefrontal scales at the dorsal sides of their heads.

Jaws: The edges of the sheath of their upper jaws are denticulated. The lower jaws have relatively stronger and more defined denticulation. 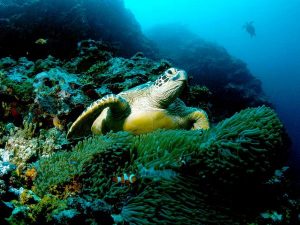 Neck: Their short necks help to distinguish them from other similar Turtle species.

Body: They have flattened bodies, characteristic of Sea Turtles.

Appendages: Mature Turtles have a single claw on each of their appendage. But, young Green Sea Turtles may have a prominent second claw.

Their distribution range extends throughout the tropical and subtropical waters worldwide. The 2 major Green Sea Turtle populations are found in the Atlantic oceans and the eastern Pacific oceans. These two populations are genetically distinct having their separate feeding and nesting grounds within their range.

They live in three different types of habitats during three different phases of their lives. Adults of this species inhabit shallow coastal waters where they have access to seagrass beds. They are also found in lagoons, shoals and seagrass meadows near the coastal areas. During the reproductive season, they move to beaches to lay eggs. 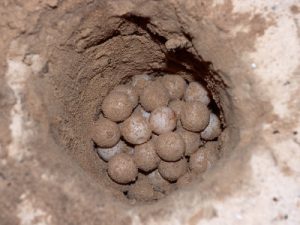 Young Turtles that are less than 10 inches long feed on various aquatic insects, worms, crustaceans, algae and grass. Once they grow above 10 inches long, their food includes algae and sea grass. Adults are herbivorous in nature.

They are among the first species of Sea Turtle to be studied. They have quite an interesting behavior pattern:

Sharks are the only predators of the adult Turtles of this species. Especially the Tiger Sharks prey on the Green Sea Turtles in the Hawaiian waters. The hatchlings and juveniles have numerous enemies including different marine mammals, crabs and shorebirds. In Turkey, Green Sea Turtle eggs are often preyed upon by Golden Jackals and Red Foxes.

Their adaptive features help them to survive in their wild habitat:

These reptiles are believed to reach sexual maturity between 20 years and 50 years of age. They are known to reproduce every 2 to 4 years. Mating takes place in water. After mating, the females travel above the high tide line of the beach to lay eggs. They use their hind flippers to dig holes in the sand where they deposit their eggs. The clutch size varies depending on the species and the age of the female. Generally, each clutch contains 100 to 200 eggs. The females cover their nests with sand before returning to the seas. 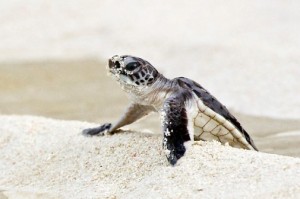 The eggs take between 45 and 75 days to hatch. Hatching takes place during night. The hatchlings instinctively start walking towards the ocean immediately after they come out of the eggs. This is possibly the most dangerous phase in their lives because various predators including crabs and gulls prey on them as they walk. Due to this reason, a large number of Green Sea Turtle babies never reach the ocean.

Not much is known about their initial life after reaching the waters as the first 3 to 5 years are spent in the open seas. Afterwards, the juvenile Green Sea Turtles start living in shallow waters permanently. Only one percent of the total numbers of hatchlings are believed to succeed in overcoming all the threats and reach sexual maturity.

Their average lifespan is up to 80 years in the wild.

This species is included in the “Endangered” category by the IUCN. The Turtles are protected by law in many countries where they are found. Illegal hunting and egg collecting by humans are the biggest threat to their existence besides the natural threats. Unintentional human threats include pollution, habitat destruction and fishing nets that do not have turtle excluder devices.

Find out some fascinating information about them:

Here are some images of these gorgeous Sea Turtles. 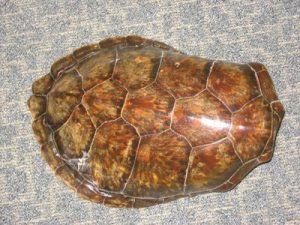 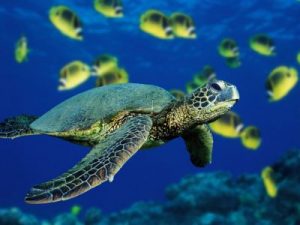