The Green-Cheeked Conure, also known as the ‘Green-Cheeked Parakeet’, or ‘Green-Cheek Conure’, is a species of small parrots native to the forest regions of South America. Belonging to the genus Pyrrhura, it is a part of the parrot subfamily of the new world ‘Arinae’, having long tails. 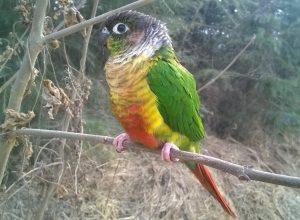 Size: Measuring from the beak to the tip of the tail feathers, the length of the green-cheeked conure is typically 25-26 cm (approx. 10 inches). They measure 5 to 5.5 inches during wingspan.

Feather and Color: The plumage of these birds is very colorful. The feather on their head is dark-gray to blackish, or brown. Their cheeks are green, as their name suggests. They have a brown. The color of their feet is also dark gray. Their tail feather is completely maroon in color.

Tail: They have a long tail of about 4 to 6 inches, which is gradually tapering at the tip. 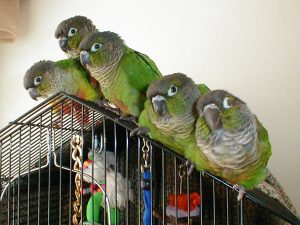 Bill: Their bills shape like that of the other parrot species and are gray in color.

Feet: The foot color of the conure is dark gray.

The green-cheeked conure has been classified into 6 subspecies:

In addition to the natural color forms, color mutants have been selectively bred in aviculture: 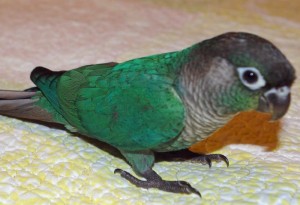 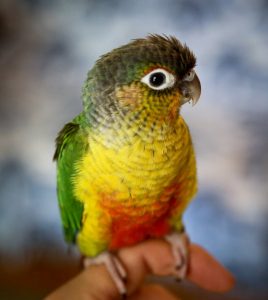 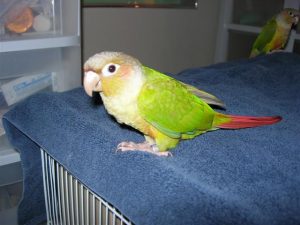 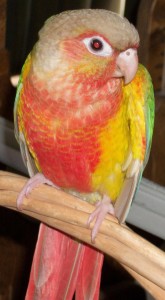 These South American birds are mainly found in the west-central and southern regions of Mato Grosso in Brazil, northern Paraguay, and northern and eastern Bolivia extending till northwestern Argentina.

Green-cheeked conures mainly inhabit the woodlands and the forest regions. 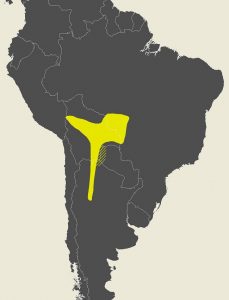 What do Green-Cheeked Conures Eat

In the wild, Green-cheeked conures have almost similar diet like other parrot species. They consume seeds, vegetables, fruits, and occasionally, insects too. 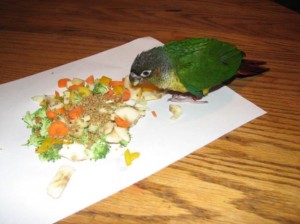 Green cheeked conure parrots are quiet, but at times, they can be very loud and noisy to such an extent that, they might even cause trouble to the owner’s neighbors. However, that is much less, as compared to other conure parrots.

Green cheeked conure birds mostly dwell in the forests and woodlands. The shades of green in their plumage help them well to camouflage from other birds of prey, as they can hardly be traced, when perching on green treetops.

These parakeets prefer living in taller trees since it makes it tough for its predators to kill or eat them. Also, this behavior makes it hard for the predators to reach up to their eggs.

The green-cheeked parrots have a very few predators, because, for natural reasons, most attack attempts on these birds remain unsuccessful. A type of bat, the false vampire, at times poses threat to the conures. The only time when these birds are vulnerable to these mammals is at night time. However, it is again tough for the bats to get its prey, because the conures, being diurnal, are hardly found hopping around in the night.

Yet another predator of these parrots is the ornate hawk-eagle.  These eagles are birds of prey. Nevertheless, it’s tough for these birds too to hunt down these parrots. The Green Cheeked conures live next to other birds as well. So, as these eagles target for an attack, the flock of birds disperses, leaving the predator to be alone, and eventually, no conures to be hunted down.

The green-cheeked conures can live up to 30 years, even in captivity. However, their lifespan has typically come down to 10 years on an average due to the neglect of their owners. 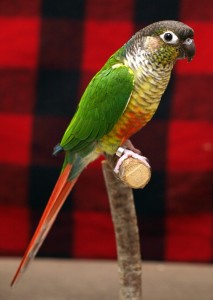 Green-cheeked parrots are highly popular pets. They get tamed and trained easily and can get affectionate with their owners by attention and interaction.

Cage: The cage of the green-cheeks needs to be enough spacious for house feeding bowls, perches, toys etc.  The cage should be large and big enough, so that the conures can swing from side to side and can hang upside down. Green-cheeks are very active by nature, and hence, need space where they can accommodate their activity.

Food and Diet: Pet green-cheeks shouldn’t be served the same kind of foods frequently. To keep them healthy and fit, different kinds of diets should be served at intervals like fruits, vegetables, legumes, healthy pellets etc. Amongst fruits, these birds specially prefer bananas and raisins. However, they also love other fruits like apples, especially if cubed or diced. Seeds like sunflower, safflower and hemp seeds are also their favorite, since these seeds are all found naturally in their dwelling environments. Tropical fruits like papaya, mangos and figs are also in their favorite list. Being flock animals, green-cheeked parrots love eating with their family and share table food with their owners. They can eat vegetables like carrots, potatoes, as also corn, popcorn, pasta or bread. However, excess of high-fat foods and seeds, like sunflower seed, can make them overweight. Fresh cuts of spinach, broccoli, dandelion, or kale can also be served to these birds. As sources of protein, non-vegetarian foods like turkey, chicken, pork or scrambled eggs can also be served, but should be removed from the cage within an hour, or else, this might get spoilt quickly and can make the birds sick.

Exercise: Because caged conures don’t get to fly hundreds of miles per day like their wild counterparts, they need some physical exercise to stay healthy and happy. Owners can give them about two hours of time per day dedicatedly for this purpose.

Training:These birds have a limited vocabulary, with extensive training, and can learn tricks easily. Conures can learn ringing bells, climbing up ropes, turnaround, flying and receiving objects, and so on, as much the owner can teach them. Other simple tricks like opening of their wings, waving, dancing, and even self-defense like staying away from objects of danger like sources of electricity, or pet cats and dogs can be taught easily.

Infectious diseases like psittacine beak and feather disease, and also, chlamydiosis are quite common among green-cheeked conures. These parakeets can also be the asymptomatic carriers of Pacheco’s disease virus. If such diseases contract, the bird should be taken to the vet without delay, or else, the disease might even affect other pets and even its owner. Non-infectious health conditions like internal papillomatosis and traumatic injury can also affect the conures’ health. Also, the owner should take their parrots to a vet, experienced in parrots, for early check-ups, as also, for clipping the wings.

In the wild, green-cheeked parrots live and sleep in their nests inside tree trunks. However, as pets, a wooden nest is not necessary for these parrots. For making a nest for these birds, a simple cardboard box with dimension 15×15 inches and the opening flaps taped shut is enough. Just a hole, having a minimum diameter of 5 inches on the opposite end of the box should be made. This box must be fixed tightly with strings inside the cage so as to keep it in place. After mating, the female would lay around 4-6 eggs at a time, after their incubation time of 22 to 25 days are over. 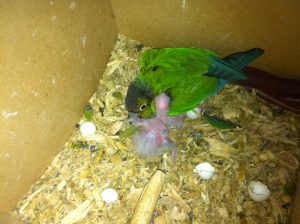 The baby green-cheeked conure parrots look almost similar to the adults, except that their plumage is fader, especially with very little burgundy part in chest feather, and eyes having darker irises. These baby parakeets reach their age of maturity by 1 to 3 years of age. 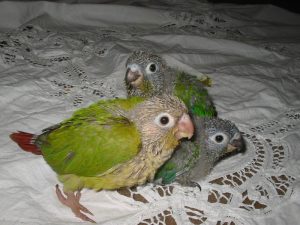 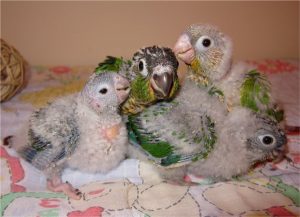 The green-cheeked conures can talk. However, they are not known to be good talkers. Their talking ability is moderate. These parrots can learn to talk, if taught, but with a limited vocabulary and a grating voice, which might not always be understandable. But there is no guarantee that, they will learn to talk. 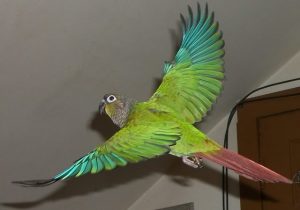 In 2012, green-cheeked conure has been listed by the IUCN 3.1 as “Least Concern” due to its increasingly high population. 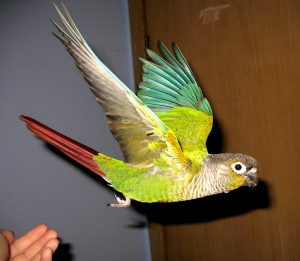 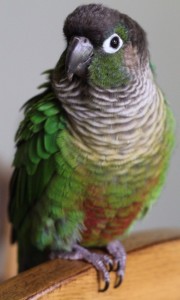