Quaker Parrot, also known by other names like Monk Parakeet and Quaker Parakeet, is an extremely intelligent species of social parrot originating from the Argentinian temperate to subtropical areas, as also the surrounding countries. Feral quaker parrots are also found scattered in many places in the wild, including Europe, North America and some parts of Asia. These parrots, taxonomically, are the only member of the genus Myiopsitta. Quaker parrots are talking birds. They are widely kept as pets. 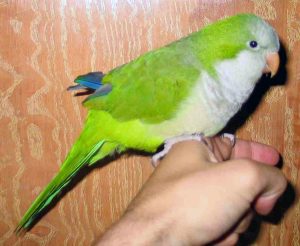 Feather and Color: Quaker parrots have a very gorgeous plumage in contrast with green. The chest of these birds is brownish grey, with each of the feathers having a pale grey border. The upper part of the abdomen is olive yellow, while the lower abdominal region, the thighs, the rump and the upper tail coverts are yellowish green in color. The flight feather tips are bright blue. The upper side of the tail is green combined with blue in the center. The underside is faded green with a base in grey-blue. The commonest color variation is pale blue (in place of green) with a grey underside. Occasionally, all yellow quakers and albino parrots are also found at times.

Tail: They have a long tail, gradually tapering at the tip.

Bill: The color of the beak is brownish to orange.

Feet: The foot color of these birds is grey. 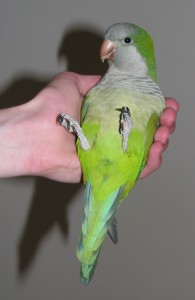 There are four recognized subspecies of quaker parrots:

In the wild, the quaker parrots are mainly found in the suburban yards, city parks and semi-open country. Despite originating from the regions of tropical climate, these birds are quite able to adapt themselves to even extremely cold climatic conditions.

Quaker parrots originated from the South America, including Paraguay, Uruguay, Bolivia, Argentina and parts of Brazil, but are now found in abundance as an introduced species in North America. They have been spotted in the U.S. States like Virginia, Alabama, Illinois, Louisiana, Oregon, Rhode Island, Colorado, Massachusetts, Connecticut, Delaware, Florida, New Jersey, Texas, and New York. 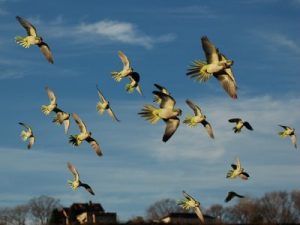 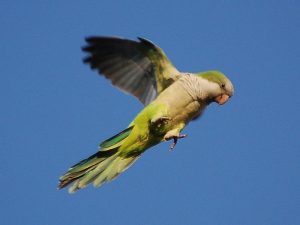 Unlike many northern hemisphere birds, quaker parrots do not migrate long distances overseas. Rather, these birds engage in semi-migratory behavior. When the monsoonal rains replenish water sources, these birds fly to new areas within their own continent, or to where the best source of food is.

What do Quaker Parrots Eat

In one word, the main diet of these birds includes fruits and seeds. In the warm summer months, the quakers feed upon berries, fruits, plant buds and weeds, while searching for food in groups of 2-55 birds. Between December and February, the coldest months, these creatures exclusively feed on bird seed at backyard feeders. 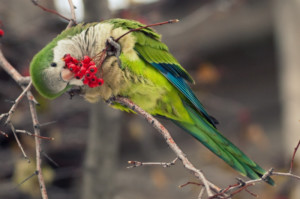 The quaker parrots have a distinctive feature exclusive to them – the quaking and shaking. These parakeets move up and down repeatedly and quake in a manner which seems to be quite disturbing and abnormal. However, this is a natural behavior to these birds. These parakeets are typically social beings that appreciate the company of other quakers and humans, and can even become neurotic and depressed, if left alone frequently. If introduced at an early stage, a pair of these parrots will bond. Also, they won’t lose the bonding to their owners if given a lot of close interaction and included in family life.

Quaker parrots are talkative, noisy creatures, both as pets and in wild. They can pick up words and phrases very easily, especially if kept single and tamed at an early age. As pets, these birds can even wake up the owner from sleep by their sharp, high-pitch calls, and can even disturb the neighbors. These birds screeches ‘skveet’, and their call sounds like a loud and throaty chape(-yee) or quak quaki quak-wi quarr.

Quakers are mostly feral birds living in flocks, in the greens. Hence, they are mostly found in shades of green probably as a weapon for camouflage. They have an excellent ability of talking and imitating. This in turn has given them the ability to mingle, get training and socialize more with their human owners.

Quaker parrots don’t have any specific potential predators. However, some species of eagles might pose a threat to their nests in the wild. For the pet parrots, mainly cats can prove harmful or fatal to these birds.

The average lifespan of quaker parrots has been recorded to be between 20 and 30 years both in captivity and in the wild. 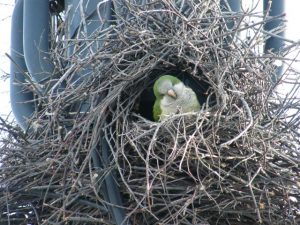 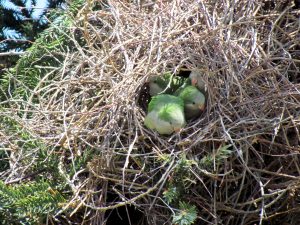 The nests are large, free-standing and elaborate. These parrots do not like building their nests in trees, but into the side of cliffs. Other than in man-made buildings and constructions, unfortunately, the quakers also prefer building nests on electrical poles, especially those that contain electric transformers generating heat, and thus, posing a fire hazard. 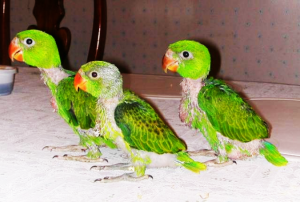 The nests have many doorways, and multiple pairs of quakers can live in one single nest. The nests weigh in excess of 200 pounds, and might have rooms for more than 40 birds. 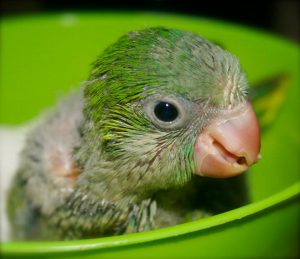 They attain the age of sexual maturity usually at the age of two years. On an average, the size of the clutch is four to eight eggs. As the hatchlings are around four weeks old, the second clutch usually starts. The rate of mortality of the babies is usually around 50% or more. Hence, with each breeding cycle, only one or two offspring are expected to reach the state of full maturation.

Quaker parrots make great pets for their charming, comical personalities, and are one of the most common pet birds around the world. However, these birds are illegal to be owned, sold, or both, in some US states. 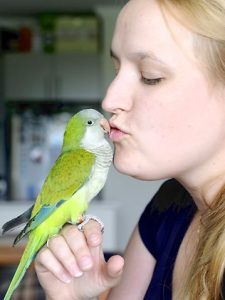 Choosing a Birdcage: Quaker parrots are active by nature. So, they need cages, which are roomy and spacious. However, care must be taken to make sure that, there is little space between the bars, so that the birds don’t get their heads caught in between.

Diet: Quakers are extremely good eaters.It is advisable not to give the same food to the quaker parrots day after day, or else, they will get bored of it. The main ingredients of the parrots’ food should be vegetables, fruits, legumes, pasta and healthy pellets.

Vet Care: The owner should take their parrots to the veterinary doctor to get yearly checks done and also to learn how to clip the quakers’ wings. The owner must find a vet experienced in parrots and which are open for emergency cases at night. A sick quaker parrot should immediately be taken to the vet.

Compatibility with other species: It is not advisable to keep quaker parrots in the same cage along with other bird species. 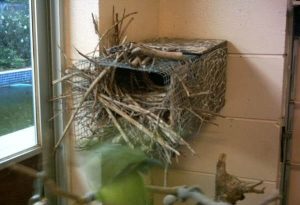 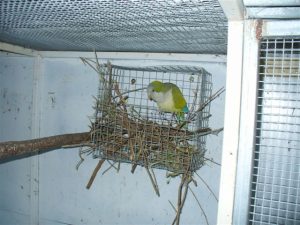 The commonest form of health problem with these parrots is plucking out feathers, or feather destructive behaviors. Fatty liver disease is also a common problem to these birds. This can happen if their diet is mainly restricted to nuts and seeds. To avoid this, they need a mixture of varied diets, as discussed above.

Quaker parrot has been listed by the IUCN 3.1 as “Least Concern”. 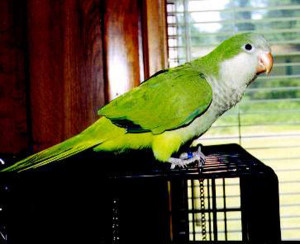 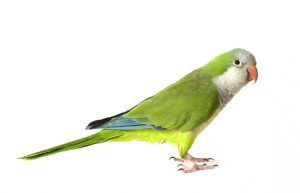