The Gila is a species of woodpecker birds found in the Sonoran Desert. It is a medium sized bird of the desert regions living in the southwestern part of United States.

There are a few common names of this magnificent bird.

Color: The head, throat, breast and belly are brown colored with a small red cap on top of its head. Their backs and wings are black and white. It has a white rump. Females and juveniles do not possess red cap. The eyes are dark red in color. 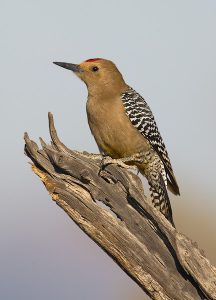 Tail: White upper tail is covered with striped central tail feathers. The wings in the lower portions are white.

Legs: The legs are short with strong toes and sharp claws.

Tongue: The tongue of this woodpecker is long, pointed and sticky.

Wingspan: Their wingspan stretches up to 16 inches.

During winters these spectacular birds migrate to southern parts of USA.

Let us read the behavioral patterns of this bird species.

This woodpecker calls in a rolling “churr” sound. It makes a “yip yip yip” and also a “kee-u kee-u” sound. These beautiful woodpeckers have a long and steady drum. Their calls may resemble a to that of a Rubber ducky.

The Gila Woodpecker feeds on beetles, grasshoppers, ants, fruits from saguaro cactus, berries and mistletoe.  They are known to hang on the garden humming-bird feeders and hastily lick the sugary water. While the males search the trunk and main branches of the cacti for insects, the females hunt for the diseased parts or the ends of the branches. 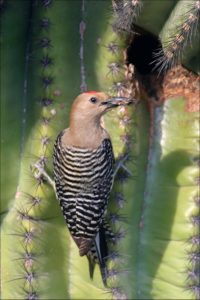 This red capped woodpecker is noisy and has a loud, screeching call during flight. They are moderately high flyers.

Gila Woodpecker mates from April through August. It raises about 2-3 broods in a single season.

The eggs have a twelve to fourteen days incubation period. The nest is just a hole in a giant saguaro cactus or any tree. Woodpeckers generally lay three to four eggs. If food is abundant then Gila may have a second clutch in the month of July. 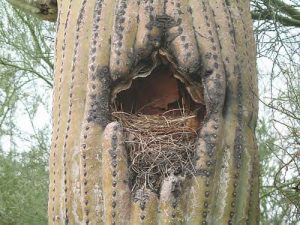 After digging the nest hole, the mating pair allows the cactus to dry up for quite a few months before it is utilized again. This makes the cactus to build a solid dry wall around the nest.

The eggs are white in color and not very sleek when fresh. After sometime it becomes fairly shiny. The shape varies from ovate to elliptical-ovate and is at times quite pointed.

The Gila digs into a cactus or uses a mesquite bush for building nest. The saguaro is the most sought-after nesting site because the cactus offers security with its spines and the 30 degree lesser temperature inside.

Both the parents share the 2 week incubation phase and feed the young one for a month after they are hatched. The young ones are bare and blind at first but become completely clothed in the feathers before leaving the nest. The male protects the nest as it is prone to attacks by foxes, flickers, cowbirds and other animals.

The young woodpecker leaves the nest when they turn one month old. The young one feeds on insects, fruits and scavenged items from human territory.

In captivity these woodpeckers can live up to ten years. They however live up to seven years in the wild.

Gila Woodpecker is classified as “Least Concern” by the IUCN.

Find out some interesting facts about these amazing birds.

Here are some pictures of this fabulous woodpecker. 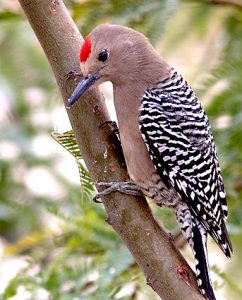 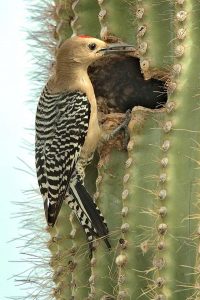