Corbicula fluminea is a freshwater bivalve mollusk species from the Corbiculidae family. These freshwater clams are mainly a native of Asia, distributed in Europe and parts of America in the early 20th century. People in Southeast Asia consider them as the harbinger of good luck for which they call them good luck clam. Displaying a yellowish green color this organism has distinct features and habitat that can be explored in the following lines.

This is how the mollusks look:

Color: Shell is largely yellowish brown or dark olive green in color with many elevated concentric rings on the surface that are evenly spaced. Light hued shell morphs have light brown or yellowish green periostracum along with light blue nacre. Darker clams have dark royal blue nacre with a black or dark olive periostracum.

Size: On an average they are 25 mm long but can also grow up to be 55 to 65 mm long. Juveniles are 1mm long when released.

Teeth: Right valve comprises a pair of lateral serrated teeth on its sides and left valve has only one in each of its sides.

In general the native range of the genus Corbicula is between tropical and temperate southern Asian regions. This species of clam is a native to China, Thailand, Russia, Taiwan, Japan, Philippines, Korea and selective regions in Africa. It was introduced to Columbia in the early 20th century by immigrants from Asia. Since then they are highly prevalent in North Carolina’s Albemarle and regions along the east coast. Darker clams are only limited to certain areas in southwestern United States. 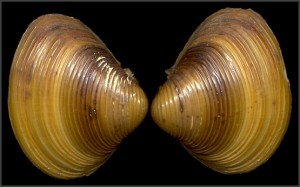 Being a highly invasive species, they have penetrated into Danube and Elbe through the Rhine-Main-Danube Canal. They are also common in Minho River (Portugal), Lake Placid and Venezuela. They are common in estuaries throughout San Francisco Bay, Chesapeake Bay, California and Virginia.

These organisms mainly live in streams and lakes having clean and coarse sand substrates along with fair concentration of silt and clay. They are tolerant to saline properties to a minimum extent. C.fluminea is suited to water temperature of around 86 degree F. Polluted surroundings do not suit them.  For deriving dissolved oxygen they inhabit flowing waters.

They are invasive in nature spreading rapidly in some areas like Lake Tahoe which recorded minimum presence in 2002, growing manifold in the next two years.

They are not aggressive while scouting for food amidst their own species but among highly populated areas, overcrowding may tend to agitate them.

They feed on phytoplankton (microscopic organisms) after filtering them out from muddy steams and canals.

Crayfish and fish- both prey upon these mollusks. Many local fish species also feed on them. This however is a result of modification of their eating behavior. Black buffalo, channel catfish, largemouth bass, Mozambique tilapia, blue catfish etc are some of the other predators of these mollusks.

Commencing in the beginning of summer the breeding season lasts for 6 months approximately. However, it can also happen throughout the year if the water temperature is more than 16 degrees C. Highest rate of reproduction is recorded to occur in fall. 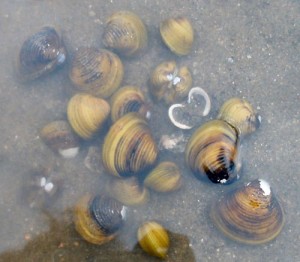 They are hermaphrodites which is why they produce eggs and sperms both. Fertilization takes place in the gills which picks up the sperms that they release into the water. The excurrent siphon releases the larvae which then enters the water column.

When they are around 1 mm, they are released in the sea, where they live at the bottom. They attain maturity after 1 to 4 years of their birth, when they become 6mm to 10 mm in size.

These clams may live for 3 to 4 years on an average and the maximum being 7 years. But their life span is certainly influenced by the habitat that they are in.

Due to their widespread harvest, they might have been endangered at some point of time but now they face no such threat.

Housing: Place them in an aquarium with water temperature between 60 and 80 degree F.

Feeding: They derive their food by filtering microscopic organisms from the water, which can be supplied to the water.

Care: Take care of the water and the space allotted to them as they multiply really fast.

Corbicula fluminea is depicted via these pictures, take a look. 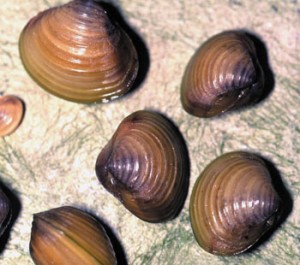 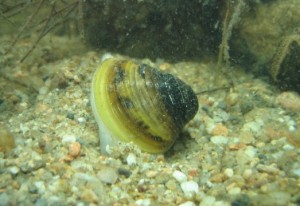