Cane toad is a true toad belonging to the Bufonidae family. It is quite big in size compared to other members of its family. This amphibian is very interesting to observe. Its looks, its defense mechanism, everything about this species suggest how interesting can be nature’s creation. Read below to find out all about this interesting amphibian species.

Size : An average adult Cane toad is of 4 inches to 9 inches in size.

Color : They come in varied colors. Mostly they are seen in olive-brown, reddish brown, yellowish and grayish. Their underneath parts are pale white or yellowish. Their bodies have darker colored patches all over in uneven distribution.

Head : They have triangular shaped bony heads, that proceeds in front from their eyes to nose. Two ears are located on two sides of the head. Behind their ears they have parotid glands. These glands secrete toxin. 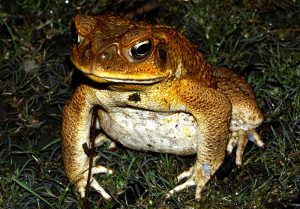 Body : They have very rough and dry skin. Their hind limbs are webbed but front ones are not. Their legs are very short and flexible, helping them in hopping.

Cane toads are very interesting to observe. Their behavioral traits form much of their defense mechanism also.

South and Central America are native lands of this species of toad. The species was later introduced Venezuela, Caribbean Island, Philippines, Puerto Rico and Florida. This species is now also found in Hawaii and Australia.

These toads have several adaptive features in order to protect themselves from their numerous predators. 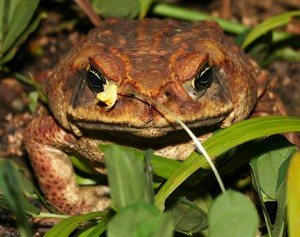 Peak mating and breeding season of Cane toads is between April and September.

Female toads reproduce jelly-like egg clutches, consisting of 8000 to 35000 eggs in each of them. These eggs are then fertilized externally. Male toads drop their germ cells on the eggs and help them mature. Those eggs fertilize into small, shy, black colored tadpoles. All the eggs fertilize into tadpoles but only 0.5 percent of them survive till adulthood.

Usually tadpoles hatch from the egg within 48 hours of being laid. Sometimes the incubation period can drag on till a week. Sometimes the eggs also hatch within 14 hours. These tadpoles turn into toadlets in a time span between 12 days and 60 days. Their growth pace slows down when they attain sexual maturity.

An average adult Cane toad can live for any time duration between 10 years and 40 years.

Housing : 30 gallons’ measurement tank is required to house this toad at ease. Provide some tree barks and create a litter looking habitat inside the tank. A shallow container with water should be kept inside. Keep a log inside for the finishing touch.

Temperature : Temperature is a very important aspect to be kept in mind while housing Cane toads. Humidity should be kept between 70 percent and 100 percent to keep them alive. These toads cannot survive in any less humidity than this.

Food : These toads are carnivorous and can be given anything to eat. They eat small insets to grown up mice.

Maintenance : These toads secrete a toxin from their skin which is poisonous. It is advisable not to handle them by touching.

According to IUCN reports Cane toads are being listed as Least Concerned. Their existence is not under threat given their natural habitat or diet is all safe and found in abundance.

Find out some very interesting points about Cane toad below short listed in congregation.

Check out the pictures below and know how this incredible amphibian looks like. 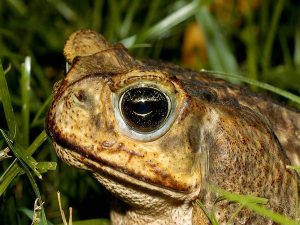 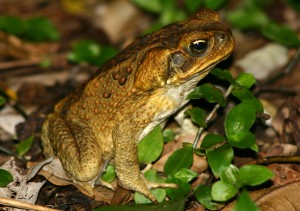